A Farewell and Thank You to Two of Lebanon’s Finest 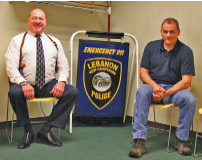 The Lebanon Police Department had to say farewell to a pair of dedicated servants who have opted for retirement after a combined 54 years serving and protecting the residents in the City of Lebanon.

Lebanon Police Chief Gary J. Smith officially retired May 1st of this year following 28 years on the force, while Lieutenant Scott M. Rathburn completed his last day on April 17th leaving behind 26 years of service. Both look back proudly at their accomplishments while looking forward to whatever lies ahead.

Chief Smith originally hails from Boston, MA and moved to the Upper Valley back in 1985 when he accepted an open position as a Lebanon Patrolman, but the move had a tentative start.

“I had been working in the Post Office in Boston and oddly enough, a friend of mine was moving to this area to take a job in the Post Office system. I had always been interested in doing police work and he told me about an opening in Lebanon so I applied. However, my wife is a city girl who was not happy with the move so we moved right back. She then realized how much I wanted to do that work and we returned in 1986. That turned out to be the best thing in my life. Living here with the Upper Valley lifestyle was the best thing for my family.” Chief Smith explained.

He leaves with a sense of pride and accomplishment and credits his predecessor, Chief James Alexander, with making his transition to the “top cop” position a smooth one where difficult changes had to be made.

“Jimmy Alexander was my mentor,” Chief Smith noted. “With his help, we were able to turn things around in several areas, especially with turnover problems. The changes in community relations was a huge factor. I feel we really turned things around in those areas.”

Lieutenant Rathburn started his service April 16, 1989 and worked his way through the system. He started as a Patrol Officer, was promoted to Sergeant and Patrol Supervisor before acquiring his Lieutenant’s position. He also served the Detective Division and the Prosecution Division and oversaw The Rape Aggression Defense Program (RAD).

After 26 years wearing the Lebanon logo on his uniform, Lieutenant Rathburn looks back fondly on his service with both pride and emotion in his voice.

“Chief Smith and I are the last ones from the ’80s era. When we started, the Police Department was in the basement of City Hall. There were some good times and I got to work with a lot of wonderful people. That included five different Chiefs and a lot of Town Managers. I am proud to have been a member of this department.”

Both men will remain in the Upper Valley and, while Chief Smith will opt to take some time to relax, Lieutenant Rathburn will be searching for a new career.

“I have taken a lot of courses over the years and would like to acquire a position in the Information Technology (IT) field.”

Both dedicated individuals will be sorely missed, not only by their fellow officers, but also by the Lebanon community as well.