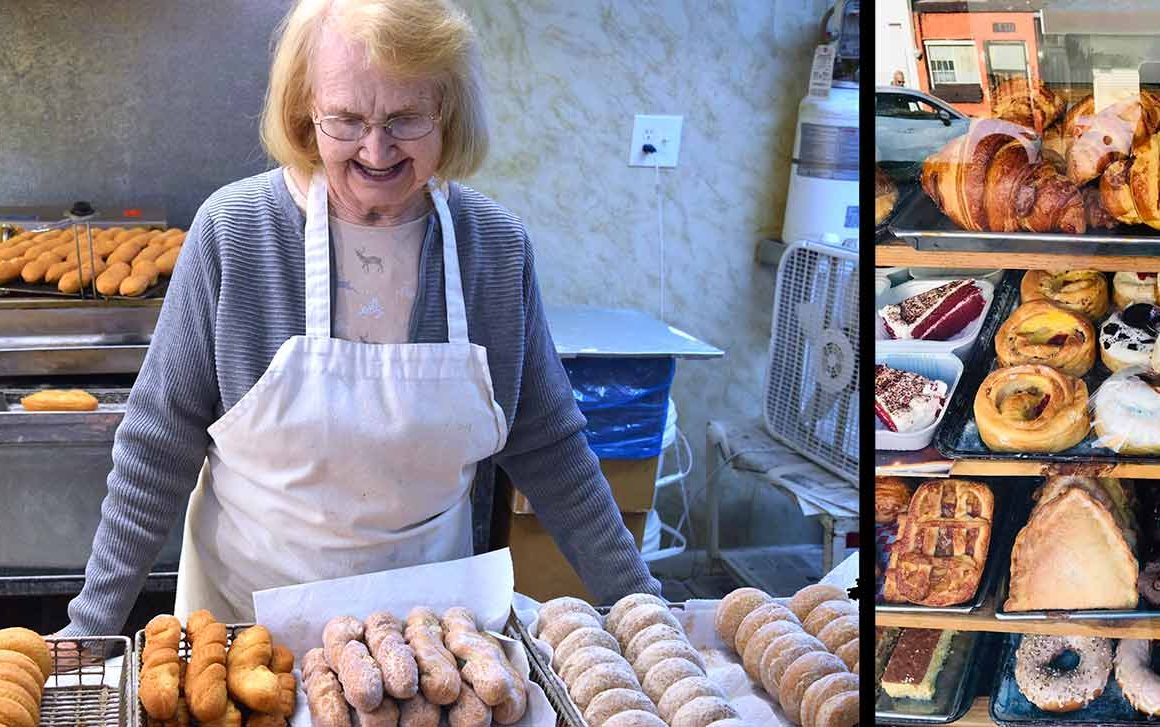 Muriel Maville, owner of Muriel’s Donuts in Lebanon, had never baked before opening the shop with her husband Francis in 1967. “I was a mother; I was at home!” Muriel laughs, “I hadn’t even gone out to work. In the beginning I didn’t even know if I even wanted to do it, but it all worked out alright.”

To say that it worked out alright is an understatement; Muriel’s Donuts has stayed in business for 54 years, with Muriel and her family baking up delicious donuts for a loyal customer base and the new faces that come in to try the treats they’ve heard about from friends and family, and in regional and national publications.

Muriel and Francis are both Upper Valley natives, with Muriel hailing from Hanover and Francis born and bred in Lebanon. Muriel recalls that she took the business course in high school, anticipating becoming a secretary when she finished school. However, she met Francis and the two married shortly after graduating high school in 1955. They quickly started their family, which grew to include five boys. The two lived in Lebanon while Francis worked three jobs to keep things afloat. When Francis’ aunt Marie was looking to sell her donut-shop business and property, Francis saw a chance to spend more time with his family.

Francis soon realized, Muriel recounts, that running the business would take two, and “that’s when I came in the business with him, my youngest one still in the playpen in the backroom here.” In the beginning, Muriel made the batters and Francis made the donuts. “We didn’t know a thing when we started,” Muriel laughs. Muriel and Francis started selling their donuts at local shops, some that no longer exist such as Mike’s, Oscar’s, and Riverdale, and one that still does: The Little Store on School Street. “We delivered our donuts in tomato boxes,” Muriel remembers, “and they put them in jars on the counter.”

At that time, all they had was the round “old-fashioned” donuts. Over the years, however, the two of them expanded their offerings, adding the crullers and the ever-popular jelly sticks. They also incorporated the cinnamon sugar and plain sugar flavors “The cinnamon sugar has really caught on as of late,” Muriel says, “and there will be people coming in, and boy, all they want is that cruller! We really added to the original.”

The original recipe was handed down from Francis’ aunt Marie, the first proprietor of the shop. Once, Muriel remembers, this story fell into contention as someone else tried to claim ownership of the recipe. “Somebody else came in and tried to tell me that their grandmother made the recipe,” Muriel says. So, she asked Francis’ grandmother and she said, “‘Oh no, I sat here while I watched her make up the recipe. I watched my daughter make it.’”

The recipe has certainly stayed a perennial favorite for Upper Valley citizens. Muriel has seen up to four generations of families come through Muriel’s for their donuts. “Kids will come and then they’ll come in with their kids, and a lot of them come back to buy the donuts for Grammy or Grandpa.” Even with many new faces coming in, Muriel still knows a lot of her customers, “If I don’t seem to know them, they’ll tell me who they are, ‘Oh, I’m so-and-so’s son, I’m his grandfather, or I went to school with your kids.’”

After her husband passed in 2013, Muriel took over working at the counter. “That’s when I started making the donuts and waiting on people, and it just came to me. I didn’t think I would like it, but I did.”

The response she gets from customers is Muriel’s favorite part of the job. “I love just making people happy because they love ’em. You can see the love in their eyes and the smile on their face and that’s what I like best is making people happy.”

Muriel’s Donuts certainly do make folks happy; people come from all around the region for a Muriel’s donut. She shares the story of NH Chronicle filming a piece on the shop. “Chronicle called me several times and I kind of refused them all until I finally saw that wasn’t going to work, so I let them come and interview me.” She remembers what happened the day after the piece aired, “I opened up and there was a line out the door! People from all over the state had come to see what they had seen on Chronicle.”

With 54 years under her belt, Muriel’s youngest son Chris now helps in the shop and, according to Muriel, will probably be the one to take over when she’s ready to retire. Muriel gets asked all the time by worried customers if she’s going to go out of business, but she says, “Everything will continue the way it is, and I’ll probably still be hanging around. I’m not going anywhere, and when I do, you’ll see one of my kids here. That’s my plan.”

With three of her sons – sadly two of her five boys passed away in the 2010s – in nearby Lebanon and Canaan, twelve grandchildren and seven great-grandchildren, and a few #1-in-the-state recognitions to boot, Muriel is content. Making people happy she says, “is a gift that I never tire of. I’ve never wanted to go do something else.” From Muriel and Francis’ beginning in 1967 to today, the story of Muriel’s donuts is one of happiness and family, “I never had baked before, but when we started this, it just fell into our lives. It worked for us. It makes me feel good that I’ve been able to be successful and make people happy.”