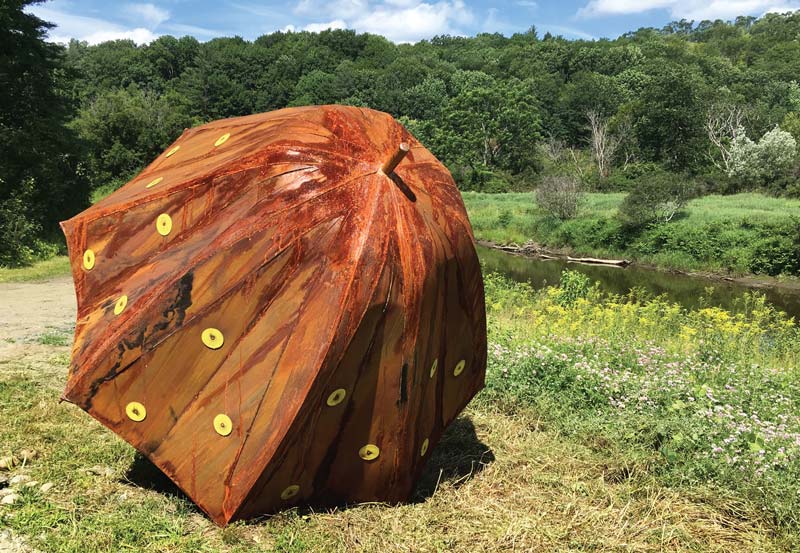 That’s Frank Gould at the July 21 grand opening of the Mascoma River Greenway. The 2.1-mile trail connecting Lebanon to West Lebanon has been more than a decade in the making, and, thanks to the enthusiastic work and support of hundreds of leaders and volunteers in Lebanon, it is finally a reality. In fact, the Mascoma River Greenway had support extending beyond the city limits: “It’s an incredible project for the Upper Valley – not just Lebanon, but the whole community – that shares a singular identity,” says Frank, speaking to an audience of more than sixty people gathered on the Alice Peck Day Homestead lawn. Mayor Suzanne Prentiss echoes this sentiment, calling the project “a source of pride for the community” and listing its wide-ranging benefits to health, economic development, community cohesion, and conservation. A letter from State Senator Martha Hennessey lists bikers, runners, and art enthusiasts among the beneficiaries of the Greenway before affirming also that “all members of the Lebanon community can take pride in this day because this trail symbolizes and builds community connections.” 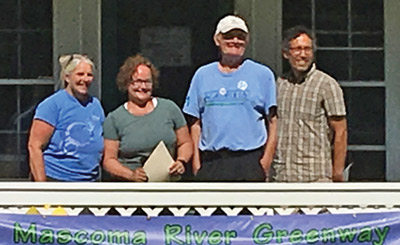 One argument is clear throughout the presentations: this is the result of a massive collaborative effort. Twenty-two years have passed since the state purchased the right-of-way formed by the Northern Railway 1847 to produce the Northern Rail Trail, which runs from Boscawen, NH to the trailhead at the CCBA in Lebanon. In 2008, the name Mascoma River Greenway was coined to envision a four-mile continuation of this trail into West Lebanon, and planning and fundraising began to make the Greenway a reality. Though the terminal stretches on either side of the Greenway have yet to be completed, the main stretch is now open to non-motorized traffic (aside from perhaps the occasional electric wheelchair, Frank suggests) seeking a safe route from the Mascoma Street-High Street intersection to the Miracle Mile end of Glen Road.

Of course, the crowd hasn’t gathered simply to listen to speeches and then go home – the bulk of the grand opening event is designed to be spent enjoying the fruits of labor. Three groups form: one for cyclists to enjoy the newly paved passage, a second for a leisurely stroll along a short portion of the trail, and the third with the goal of walking the entire completed segment. Frank leads this third group as tour guide. The project has been dear to him since he left his position as a state legislator in 2012. “I wanted to stay involved,” he recalled. “I walked up to Paul [Coats, director of Lebanon Recreation and Parks] and asked him what we needed to do to get started, and he showed me the beginnings.” Frank took the lead from that point forward, co-chairing the project with Paul Coats. 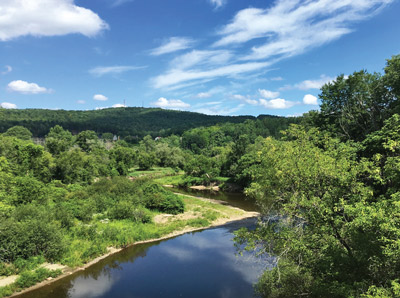 Lorraine ‘Rainie’ Kelly, who has been involved since 2013, tracked funding for the project. “When I started, all the large donations had been secured,” she said. “My focus was on meeting the neighborhoods, to make sure there was support from everybody, and not just a few big donors.” Rainie says there were 248 donations of varying sizes, from small individual contributions to hundreds of thousands of dollars.

Among more substantial tasks like clearing the trails, constructing guardrails for bridges including the footbridge over I-89, and paving the trail for accessibility, the work has included aesthetic enhancements. Two sculpture installations have been added along the trail: Steel Umbrella by artists Margaret Jacobs and Justin O’Rourke, and Wheels by artist Susan K. Johnson. Benches are planned along the route to give the tired an opportunity to pause; one will be dedicated to Frank and Paul. And at the end of the presentations and before the walking and cycling groups formed, volunteers handed out cups of wildflower seeds to be strewn along the edges of the trail. Attendees carried the cups with them, sprinkling seeds one at a time over clear patches of soil, allowing residents yet another instance of ownership of the Greenway.

Public response to the Greenway is overwhelmingly positive. Darla Bruno, a resident of Lebanon, likes that the trail is wide, leaving plenty of room for bicycles alongside pedestrians. “They did a terrific job,” she notes of the leaders and volunteers who have made the project happen. “I’ve never been to the [Glen Road] end, so I’m excited to see it today.” Nick Warren, who lives on Mascoma Street along the Greenway, says that he and his wife “enjoy easy access from our backyard to walk to the Lebanon Green or the woods behind Alice Peck Day. It’s great to be in a mini-forest instead of walking next to busy roads, especially with the construction going on. We even go for walks down to the bridge over the White River. It is probably the best view of nature inside the City and I didn’t even know it was there before the Greenway project.” Samir Soneji, while walking along the trail while his two young daughters cycle, quips: “This is the farthest we’ve gotten, and we love it. It’s revolutionized our toddler biking experience!” Samir and his family are leaving Lebanon soon for North Carolina, and he reflects that “this is one of the things we’re really going to miss.” Jennifer Rataj, another Greenway neighbor, appreciates the wildlife she’s seen along the trail, citing both a red fox and a heron she saw recently at a small pond. “Even with the pavement, it does still feel very quiet, and everyone there is really friendly. It’s really nice for the community. It doesn’t matter where people live; they still come down to the trail.” 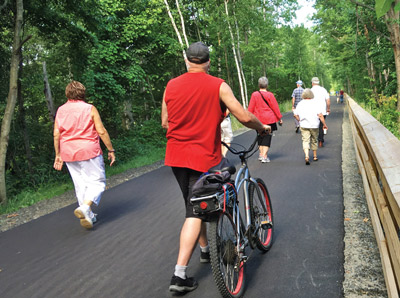 At a recent City Council meeting, a public hearing addressed the future of the tunnel that would connect the Mascoma River Greenway to the Northern Rail Trail. City Councilor Karen Zook summarizes: “The citizen response – both at the meeting itself and in contact I have personally had with residents – strongly supports connectivity, so I’m pleased that’s the direction this seems to be moving. The Rail Trail and now the MRG are both assets to this city and, as we look toward an increasingly walkable future for Lebanon, this connection will only increase their value to the community.” With such strong community support, It’s hard to imagine anything else.

Team Sierra is excited to announce that their second annual Backyard Day celebration will take place on September 15, 2018!

Backyard Day is a celebration of the outdoor spaces that you consider home. We all have those spaces we consider our own: your literal backyard, the lake, or on the trail!

This year, we’re introducing a brand new way to celebrate: a virtual 5K/10K in whatever special space you consider your backyard. Whether you run, walk, roll, swim, or cycle, we’ll all celebrate our outdoor homes together on September 15th.

Use #BackyardDay to see what outdoor spaces other Team Sierra members call home!

Registration is $40, and includes a printable race day bib and an exclusive Backyard Day medal! Sign up today to guarantee a medal – they will sell out! Register at www.teamsierra.org.