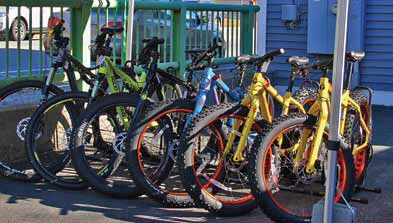 Rejoice all you die-hard bicyclists in the Upper Valley: When the snowflakes start falling, you no longer have to be forced inside and sit astride that stationary bike while you watch boring television shows in your living room!

“The fat tire bike opens up all four seasons in our region,” says Jason Ouelette, new owner of the bike shop at Mason Racing on Mascoma Street in Lebanon. It’s an ideal location when you consider that within the Lebanon area there are some 105 bike trails, highlighted by the Northern Rail Trail.

Fat tire bicycling has taken the region by storm and the Lebanon area may be the epicenter of that movement. Jason’s shop is exclusively for off-road biking enthusiasts and features the wildly popular fat tire bicycles.

A fat tire bike is an off-road bicycle with oversized tires, typically 3.8 inches or larger in width, mounted on rims 2.6 inches or wider. Fat tire bikes are designed for low ground pressure to allow riding on soft, unstable terrain such as snow, sand, bogs, and mud. Note there is not a mention of pavement.

“The tires on these bikes are designed for off-road riding, and they can be used during the winter months. However, they are not designed for riding on pavement or sidewalks because there would be too much friction and resistance on hard surfaces,” Jason said. “We do offer studded tires for winter conditions, but off-road terrain is where they function best.”

The bikes are well suited for bikers who may have ridden conventional bicycles over the scenic roads in the area but are attracted to the off-road features of a fat tire bike. They’re also perfect for those just starting out.

“These fat tire bikes are great for beginners,” Jason said. “Once they ride one they realize quickly what traction and stability they get with these rugged bikes. That inspires immediate confidence to tackle rough terrain. It attracts a whole new rider. Sometimes it can just be a skier having a bad winter!”

Jason is an experienced rider himself and often leads groups on outings. He’ll also host clinics for those who want to learn more. Getting properly set up with your new fat tire bike is critical for safe and secure riding.

“The setup of a bike is very important. The rider’s weight is a key factor. We have to adjust the suspension to adapt to each rider. Proper setup of their bike will make a much better and more confident rider.”

This Christmas you can ask for a fat tire bike and rather than place it in the basement until early spring, head for one of the many trails that await the dedicated rider.