In Honor of Mink: Our Wilderness Ambassador 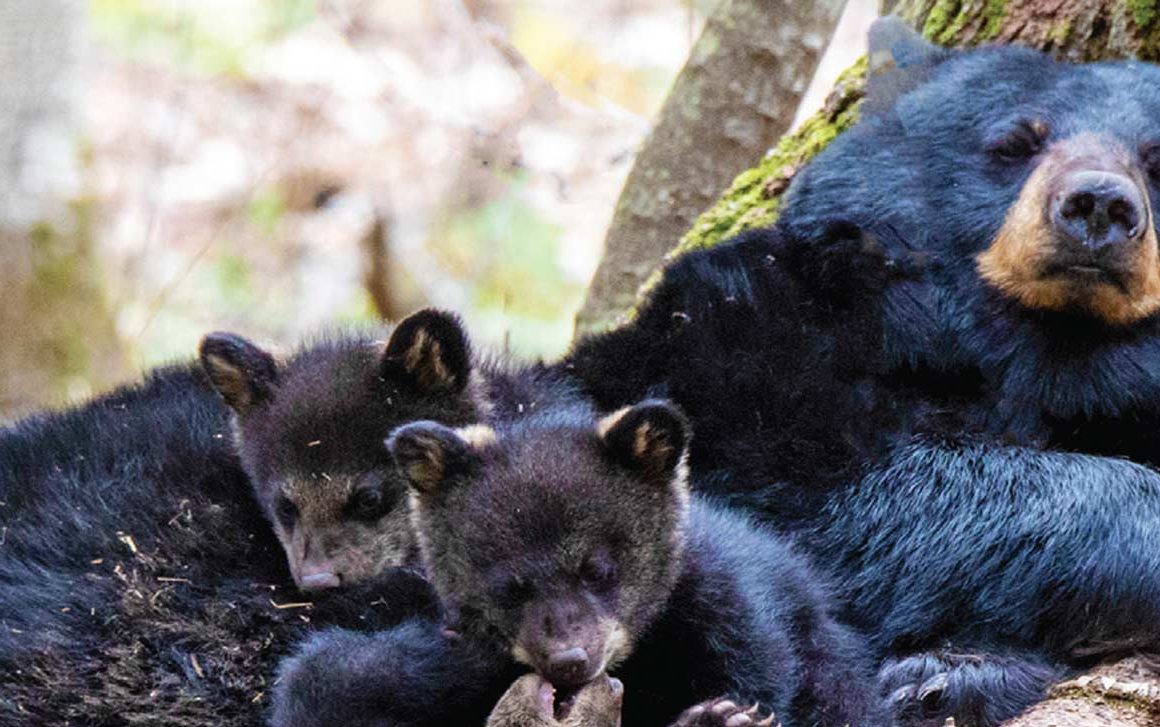 Long before Mink became famous, naturalist Mary Holland had the privilege of accidentally encountering and spending time with this enchanting bear. Named after the nearby Mink Brook tributary to the Connecticut River, Mink was beautiful and courageous, having spent most of her 30 years at the mercy of humans whose ultimate decisions guided her destiny until her untimely death in August 2020. During the time we came to know her, she not only exhibited her charisma as an individual but, also her goodness as a mother, leaving behind many offspring, several of whom continue to live in the Hanover/Lebanon area.

Seen often about town or its outskirts, this black bear became a local symbol of confidence and strength, agility and authority. She modeled the kind of perseverance and courage we long for in this dystopian age. Her fearless year-long return journey from the edge of Canada to Hanover as a result of relocation in 2018 became her trademark, the vehicle by which she stood her ground. Through woods, across highways and rivers, in the rain and snow, Mink never gave up her drive to return home. And so, her arrival in the spring of 2019 brought more press, fame and fortune. After all, it not only gave her the comfort of a familiar place but also three new cubs.

She thrived for awhile, photographed and videotaped by local residents who shared their delight in having her home again. But it was not to last. In a busy, bustling area filled with garbage dumpsters, she was bound to face danger – similar, ironically, to the one she unwittingly tackled as a youngster, nibbling on human food handed to her on a daily basis, assuring a lifelong pattern of need that she would pass to at least one set of cubs.

In essence, this magnificent creature was a hostage of human culture, her ability to survive bombarded by the people who ultimately were the conduit of her fate. She became a zoo-like curiosity, even though she was simply a bear whose life sadly had morphed to adhere to the mores of her human neighbors.

She is at peace now and euphemistically back where she belongs, where Holland first met her, isolated from human interruption amidst the coniferous and deciduous forests where she can forage on acorns, tree nuts, and berries to her heart’s content.

Proceeds from writing these articles will be donated to the Kilham Bear Center in Lyme, NH.

First Encounter: The Magic of Mink

It was early April, and, although it was melting fast, snow was still on the ground. Friends had alerted me to the fact that the bears that regularly were seen in their back yard had appeared after a winter of being absent. Hibernation had come to an end for Mink, their frequent visitor, and her family. The year was 2017, and I had caught an occasional glimpse of Mink in years past and photographed her at a distance. I knew more than to count on seeing her family when I was spending just a few hours in the middle of the day, where she had been recently spotted. My hope that morning was simply to find some good tracks and photograph them.

I arrived and headed into the woods where I soon encountered multiple black bear tracks, some large, most a bit smaller. With camera and tripod in hand, I decided to follow the tracks to see if I could find the perfect print as well as where they led me and what they told me about the bears’ activity. After I had followed them a relatively short distance, I came to a very large white pine tree that was surrounded by bear scat. Lots of bear scat.

The saplings in the vicinity of this tree had all been chewed on, scratched, broken and bent. Bear hair was evident on many of them. At the base of the white pine there were several shallow indentations roughly four to five feet wide. I was thrilled to have found what I knew must be the location where this family of bears spent a considerable amount of time. The tree had to be a “babysitter” tree – a place of refuge and rest for the bears. When a mother bear goes foraging, or when danger threatens, she sends her offspring up this tree and they remain there until she signals them that they may come down. Much of a bear family’s time is spent in the vicinity of such a tree.

Although my day had already been made by this discovery, I continued to follow the tracks, more in hopes of learning about bear behavior than actually seeing the bears, although that was always in the back of my mind. After an hour or so I decided to turn around and retrace my steps as I headed home. As I neared the babysitter tree, I looked and there, at its base, was a large pile of furry black bodies all huddled together, fast asleep. During my absence, Mink and her three yearlings had returned to the site and decided to take a nap. It probably hadn’t been many days since they emerged from their den, and they were resting.

I immediately set up my tripod and camera, not quite believing I had been presented with this amazing opportunity. Within a short amount of time, they all woke up, and, while they were very aware of my presence, they seemed unperturbed. As they watched, I slowly moved as close to them as I felt was in my best interest. Mink let me know exactly how close that was. Soon the cubs became active and engaged in all kinds of fun and games with each other and with their surroundings. Mink passively observed their behavior as they “boxed” with each other while standing on their hind feet, wrestled on the ground, chewed on all matter of things, from branches to acorns, climbed on their mother, and last but not least, investigated the human who had invited herself into their territory.

Although every encounter I had had with black bears until then had confirmed that they are far more afraid of humans than humans are of them, these bears had been raised near houses, and were somewhat acclimated to the two-legged creatures – so much so that I repeatedly had to discourage one of the cubs from getting too close to me for fear that I was pressing my luck with Mink’s parental tolerance. I knew that I had succeeded in proving my good will toward them when Mink lay down, rested her head and back against the pine tree, and invited all three cubs to nurse.

Never have I felt so privileged to witness wildlife behavior. Of all the experiences I’ve had with wild animals, this is by far the most memorable. Little did I know when I headed out to photograph bear tracks that morning that I would have the most intimate wildlife experience of my life. The magic of that day will never fade.