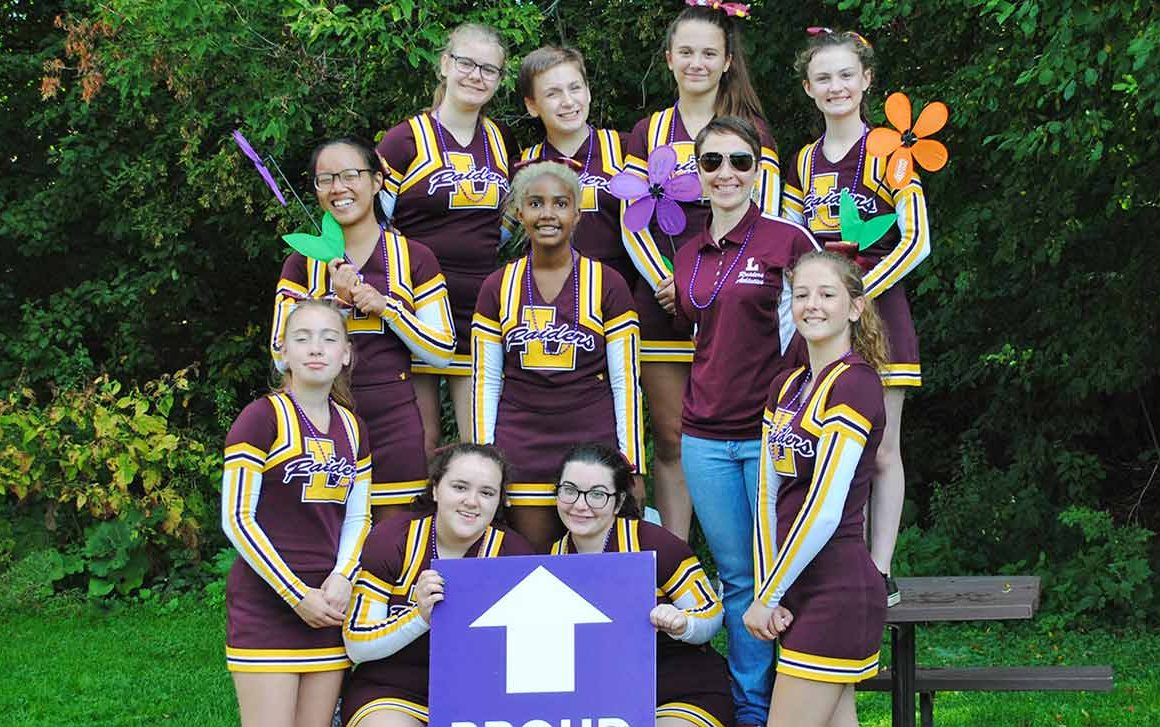 Among the outdoor events that went virtual through Covid last year was the annual Walk to End Alzheimer’s.  The event is held every fall in more than 600 communities across the country to raise money and awareness for the work of the Alzheimer’s Association. The walk went on nonetheless, and Lebanon locals came through with a strong show of participants, sponsors and spirit. They’ll be at it again this year on October 2, this time with the option to do what communities do best – to connect in person.

The Power of Purple: Purple is the color of the Alzheimer’s Association, and “going purple” is a way to show support for the cause. Several local schools used the power of sports, with teams wearing purple socks and shirts for their games and practices around the week of the walk. The Cheer Team led the purple charge at Lebanon High. At Kimball Union Academy the effort was motivated by an especially deep connection.

John Custer is a history teacher, soccer coach, and hockey coach at KUA. His wife Karen was also a math teacher at KUA before being diagnosed with early onset Alzheimer’s, at age 51. At the time their two sons were in high school. She passed away 10 years later, in 2013, after a long struggle for herself and the family. In her memory, Custer hopes to spread awareness that Alzheimer’s is not just a disease of the elderly but can also affect people in the prime of life.

Last year, Custer was looking for a way for KUA to be involved with the Walk to End Alzheimer’s, but the volunteer options were out. He found the solution through KUA’s science department and sports teams. Then-junior Libby Kotei-Fearon,  one of KUA’s Stem Scholars, was looking for a two-year project based in neuroscience. As part of her studies, she put together a presentation on Alzheimer’s for the all school meeting the Wednesday before the walk.

“For a high school student to even think about mental decline is pretty cool,” says Custer.  Libby’s presentation explained the disease as well as the significance of KUA athletes wearing purple socks and arm bands at their athletic events that week, and the importance of spreading awareness for the cause. The goal is to make sure as many people as possible know about both Alzheimer’s Disease and the work of the Alzheimer’s Association, which includes a free 24/7 Helpline, no-cost education programs (accessible virtually), free care consultations for families facing a diagnosis and more.  These services are funded entirely by the money raised during the Walks and other fundraising events each year. This year Libby and the Neuroscience Club will be participating in the Walk.

In addition to starting or joining a team, local businesses support the cause by sponsoring the event. Among them are Mascoma Dental and here, too, the connection is personal. Lauren Andreolas is one of the four dentists at Mascoma Dental. Her grandmother was one of three sisters, all of whom developed Alzheimer’s. Nearly two-thirds of Americans with Alzheimer’s are women. As Andreolas describes it: “We watched three strong, beautiful women who lived through the depression, raised children, non-traditionally went outside the home to work: who broke glass ceilings, who were great cooks, who were the matriarchs of their families become debilitated by the disease.” She recalls the experience of watching them forget their loved ones, eventually stop eating, and ultimately pass away from the disease. Andreolas and her three sisters shared that experience, and now the accompanying anxiety. “Of course, we all have the fear that this will also be our fate, so it is our job to support Alzheimer’s treatment and research.”

In addition to the services it provides, a major focus of the Alzheimer’s Association is funding research toward treatment, prevention and, eventually a cure. For Andreolas, along with so many others, directing resources and energy towards a cure provides a productive channel and a way to connect with others who share experiences and concerns.

Among them are Jude Dutille, owner of Dutille’s Jewelry, a first-time event sponsor this year. Dutille lost his father and his father-in-law to Alzheimer’s and is all too familiar with the long and difficult journey, “My wife and I experienced it all, beginning to end.” As a local business owner, he wants to support causes in a meaningful way. Raising funds and awareness to support people touched by Alzheimer’s seemed like a natural fit. Now that Dutille and his wife are catching their breath, he recalls, with both his father and father-in-law, the times that mattered most: “Good days, or a great moment or when they laughed, or you felt like they were their old selves. You’ve got to appreciate those, because these small moments…that’s what you can give them.”

This year’s Walk to End Alzheimer’s kicks off Saturday, October 2, at 9:30 am at Hanover High School. Here are all the ways you can support the community effort:

For information on all of the above go to https://act.alz.org/uppervalley.