May 26, 2016by AdminLTNo CommentsAll, Community Impact

The Upper Valley is truly a generous region when it comes to supporting worthy causes. The growth of The Prouty, now in its 34th year, is just one example. Another great example, taking place each year in Lebanon on Father’s Day, is Skip’s Run.

This annual fundraising effort is named after former Lebanon resident Skip Matthews, who succumbed to brain cancer in 2003. Each year, this event raises funds for brain tumor research at the Norris Cotton Cancer Center at DHMC. Over the years, the popular run has raised a total of $165,000 for brain tumor research, said race director Denis Ibey.

The money raised from the run comes from various sources, primarily contributions from area businesses. “We have a sponsorship committee,” said Ibey, which works toward achieving those funds through business sponsorship. Additional contributions come from individuals, and proceeds from the participants in the run. All of the money raised goes to the brain tumor research effort.

An impressive number of runners show up on race day for the event. “It’s slowly grown to over 400 in the run,” said Ibey. In addition to the four-mile Skip’s Run, a one-mile fun run, called Brady’s Run, takes place. Brady’s Run is named in memory of young Brady Bukowski, who also suffered from a brain tumor. This one-mile fun run is very family-friendly, and draws about 100 participants.

Skip’s Run is fast becoming a known entity in the northern New England race circuit. The four-mile course is USA Track & Field certified, and is now part of the Upper Valley Race Series and the New Hampshire Grand Prix Race Series. This is the first year Skip’s Run has been a part of these two running series, and should bring in more runners from a wider area, including from southern New Hampshire. Though competitive runners take part, casual runners should not shy away from the run; Skip’s Run is for all level of running enthusiasts.

The course for Skip’s Run begins and ends at Lebanon’s Colburn Park. It follows the rail trail from the park, connects with Riverside Drive, goes over the Packard Bridge, and follows the rail trail back to the finish. At the finish, there is an awards ceremony for the winners, who always record some impressive results. “We have some pretty fast times,” Ibey said of the race winners. 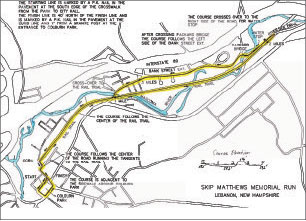 A charitable event such as Skip’s Run is not possible without the efforts of many, including a large number of volunteers that help make race day run smoothly. The day of the run is a true celebration; bands entertain the runners and the spectators at Colburn Park, and the folks at Salt hill sponsor a fabulous barbeque for all at the event. Salt hill has graciously put on the barbeque for many years.

In addition to the race-day volunteers, Skip’s Run boasts a Board of active members that handle race planning and fundraising. Included on the Board are Joanne Oscadal, the founder of Skip’s Run, and John Bukowski, Brady’s father. The Board is very active in planning the event, and constantly working to improve it. “For our whole Board, we look forward to this event,” said Ibey, adding “After the race, we are thinking about what we will do the following year.”

Many of the race volunteers, and Board members, had a personal relationship with Skip Matthews, and are dedicated to his memory, and to assisting with the effort to fund research to help find a cure for brain cancer.

This year’s version of Skip’s Run takes place on Father’s Day, June 19. The fun run begins at 9am, with Skip’s Run starting at 10am. To find out more, or to register for the run or make a donation to Norris Cotton Cancer Center’s Brain Tumor Research Fund, visit the website at skipsrun.org