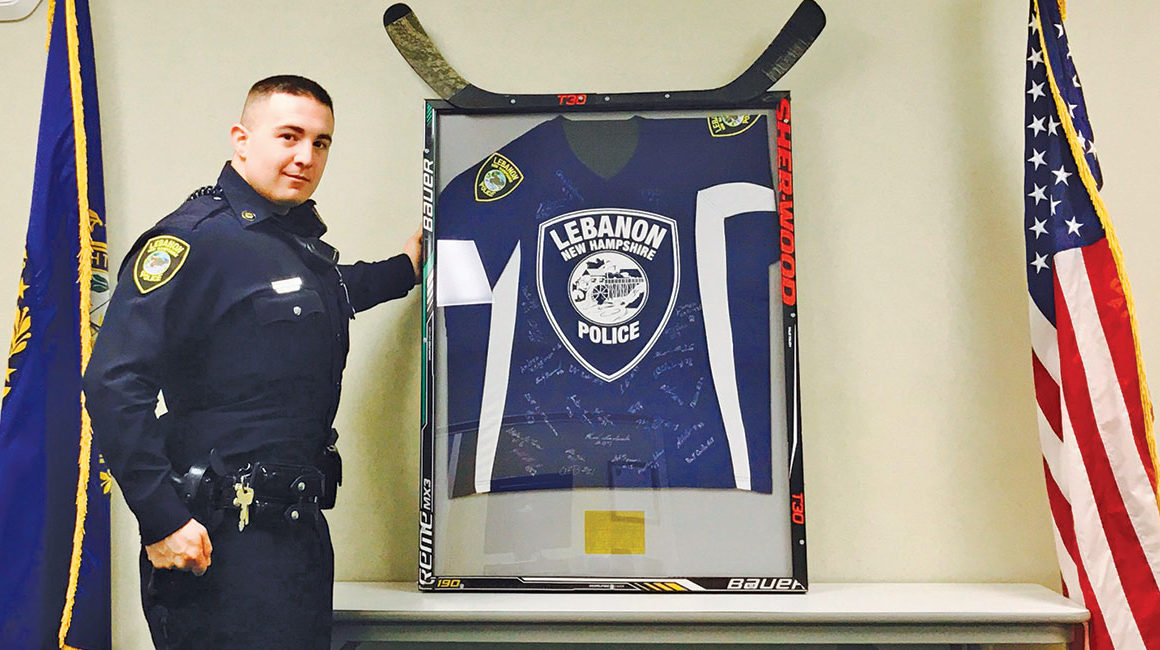 Look up tidal wave in Webster’s Dictionary and among other terms, it will state that the definition of a tidal wave is “Any widespread movement or feeling, etc.”

Lebanon Police officer Dakota DeRego acted when a life-altering tragedy descended upon a young Lebanon High School student, and his acts of kindness set off a tidal wave of compassion and emotion that swamped the Upper Valley and continues to gain strength.

It all started when Dakota heard the plight of Julie Barber and her family. Julie, a sophomore at Lebanon High School and a varsity ice hockey player, was admitted to the hospital to have a cancerous tumor removed from her spine. The end result was that the popular student-athlete learned that she would be paralyzed from the waist down. The news sent shock waves throughout the Lebanon community.

Dakota didn’t know Julie personally, but they had a common bond. The 26-year-old Lebanon Police officer always had his hair cut by Julie’s Aunt Traci. When he was informed of Julie’s condition, the news affected him deeply.

“I just could not imagine what she must be going through,” Dakota said. “I began to wonder if there was anything I could do for her. I remember when I was 16 years old I broke my ankle and that just about crushed me at the time. I had to stop playing sports. But compared to Julie’s situation, that was nothing. Her courage really inspired me after I talked to her in the hospital. I could see right away that her perseverance would get her through this. I wanted to thank her for showing me how important it is to persevere.” 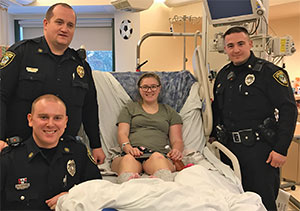 Dakota began his mission of kindness. He began to talk with community members, friends, and family. With permission from Lebanon Police Chief Richard Mello, Dakota came up with the concept of presenting Julie with a custom Lebanon High ice hockey jersey that would express how everyone felt. It became a labor of love.

“The reaction by the community was fantastic,” Dakota said. “I went to Stateline Sports in West Lebanon and they donated the jersey. I then contacted Top Stitch Embroidery, and they put the project on a fast, two-day track to finish it. Granite State Glass then donated the frame, and the Campion Rink donated various hockey sticks for the project. I then went online and studied a way to put it all together and it came out beautifully.”

When the gift was ready, Dakota made sure Julie’s family and friends were gathered in her hospital room at Dartmouth-Hitchcock Medical Center for the special presentation that brought warm smiles and tears. Julie’s reaction will stay with Dakota for a lifetime.

“I could tell right away that Julie’s attitude was inspiring. She was holding that family together emotionally and was leading the way. She is a rock! She had already stated that she would skate again someday. That is why you have seen the ‘Barber Strong’ signs and shirts everywhere you go. She has completed her rehab program in Boston and has been skating with a sled skate team in that area. I understand Campion Rink has a sled skating program and I expect she will skate there.”

Dakota’s action went far above the call of duty for any law enforcement officer. He will have been on the Lebanon force two years in May of this year, but Chief Mello notes he has already made an impact on the community he serves.

“Dakota is doing a great job,” Chief Mello explained. “He puts a lot of effort into engaging with the local community. He has always taken a consistent approach to helping people as well as his law enforcement duties.”

For Dakota, serving on the Lebanon Police Department has developed into a constant learning experience. “One great thing about this job is that every day is so different,” he said. “Each day can become a learning experience. You learn a new lesson every day and I learned a huge lesson knowing Julie about perseverance and courage.”

We believe it would safe to declare that we could all learn something about life from both Dakota and Julie.