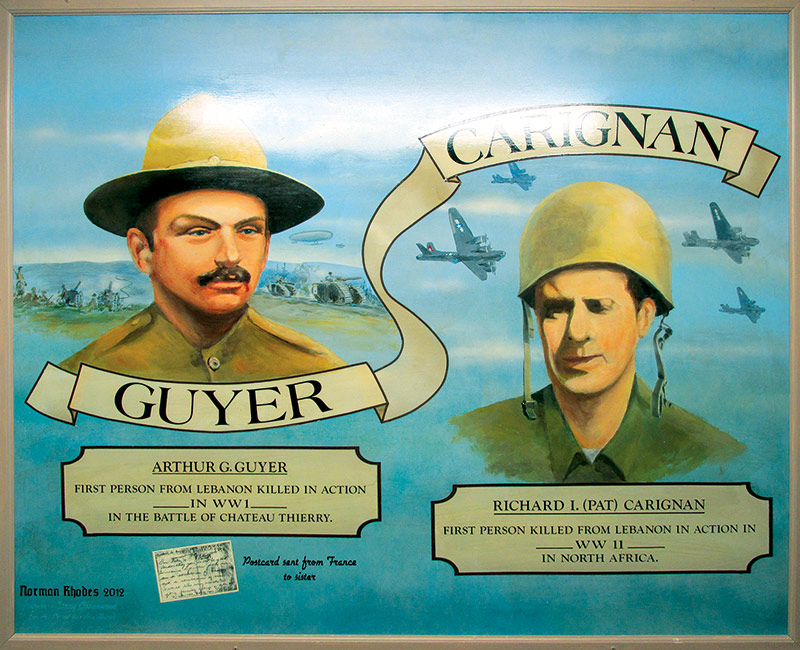 The American Legion was born at a caucus of the First American Expeditionary Force, March 15-17, 1919, in Paris. “The American Legion was chartered and incorporated by Congress in 1919 as a patriotic veterans organization devoted to mutual helpfulness. It is the nation’s largest wartime veterans service organization, committed to mentoring youth and sponsorship of wholesome programs in our communities, advocating patriotism and honor, promoting strong national security, and continued devotion to our fellow service members and veterans,” according to the mission statement on Legion.org.

In July of 1919, a temporary charter was obtained to start the Lebanon American Legion Post. It was at that time named after Arthur G. Guyer, the first Lebanon serviceman to be killed in World War I. The permanent charter was issued in 1924 with 160 Charter members.

In 1946 the Post’s name was changed to Guyer-Carignan Post 22 to honor Richard L. “Pat” Carignan, who was killed in World War II.

In 1955 the Post purchased the Underpass Cash Market and shortly thereafter bought the land at 189 Mechanic Street and built the building that stands today. With much support, they were able to retire and burn the mortgage after only two years!

We drive by this building all the time, but many of us have no idea what goes on within. As I stepped through the doors for this interview, I was met by Larry Greenwood, Adjutant of Post 22. His knowledge of and commitment to this organization was immediately obvious. Larry has been a member for 35 years and has held almost every position there. He was in the US Army from 1960-1968 and served in Korea and Germany.

One of my first questions was, “Who can belong to the American Legion?” He told me that any Veteran who has seen active duty in any branch of the services during any of the seven war eras (from WWI through today’s War on Terrorism) can belong. In 2013, there were about 2.3 million members in 13,807 posts worldwide. Post 22 presently has 582 members. I discovered that a high school classmate of mine, Roy Emerson, formerly of Springfield, Vt., is a member of this Post. No doubt you also have friends and relatives who are members. 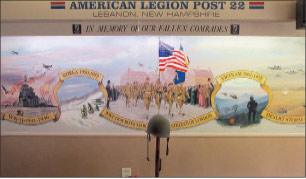 The mural painted by Norman Rhodes

As we walked around the large main room on the entrance level, Larry pointed out many interesting artifacts and photographs. A beautiful mural that adorns one whole wall was painted by Lebanon’s renowned artist and Post 22 member Norman Rhodes.  Downstairs features another large room and a modern kitchen that prepares and serves thousands of meals for banquets and other functions during the year.

The American Legion National Headquarters are in Indianapolis, and there is one “Department” in each state, Washington, D.C., Puerto Rico, France, Mexico, and the Philippines. Departments are divided into district/counties, with each local post under that jurisdiction. Tom Wiley, Ret. Command Sargent Major, is this year’s Department Commander, the first from Lebanon in 88 years. Harry Manson was the first, serving in 1928.

Following are just some of the many programs and ways that the American Legion Post 22 gives to our communities:

The Adopt-a-Veteran Program at the Tilton Veterans Home pays the dues of 17 residents, and Annette Scott remembers the 17 Tilton veterans and four local veterans on seven major holidays, including a Christmas party.

The Junior and Senior Baseball programs require a huge commitment of coaching and management during the year, and Peter St. Pierre puts in a huge amount of time and energy. Larry said, “There literally would be no baseball program without Peter!”

Many veterans attended school and student programs through the Upper Valley such as visiting Canaan Elementary in observance of Veterans Day. The Post Honor Guard held a flag folding and etiquette session at Canaan and several other local schools.

On Veterans Day, Larry, and other Honor Guard members happened to notice that the flagpole in front of the Lebanon Senior Center needed attention. So they fixed the pulley system and raised a flag. The Post also purchased a new flagpole for Lebanon High School.

Veterans Appreciation Day was started three years ago by Peter St. Pierre and consists of “A Salute to Veterans,” Presentation of Colors, welcome speeches, and the National Anthem – this year sung by Hannah Griswold, a student at Mascoma Valley Regional High School. Her dad, Dan Griswold, is the S.A.L. Finance Officer.

Two students were sent to Boys’ State with Department Commander Tom Wiley himself driving about 380 miles and volunteering about 15 hours of his time. The Post worked with the Boy Scouts throughout the year participating in parades, various flag projects, many cleanups and cemetery projects around Lebanon. The Scouts were also involved in learning the proper way to fly and fold the flag, and on Flag Day, June 14, the Post held its annual flag burning to which the public was invited.

Volunteers of Post 22, in conjunction with the Odd Fellows, distributed coffee and donuts at the Soldiers Memorial Building during the year’s parades. A dinner/dance was held in March in celebration of the American Legion’s 97th birthday.

The Christmas Basket Program delivered baskets filled with all kinds of food goods to 250-plus older veterans and auxiliary who are members of the Post, including needy families of veterans. The Children’s Christmas Party hosted 150 family members last Christmas, giving 95 children gifts from Santa (who looked remarkably like Dick Paul, Jr.!). There was music, hot dogs, cookies and drinks for all, plus face painting by Norm Rhodes.

The Post 22 Billiards Team, under the chairmanship of Len McMinn, raised $400 and provided over 100 hours of 13 members’ volunteer help to benefit The Haven. The Community Services Program was involved with hosting the 8th Annual co-sponsored Post 22, IOOF, and SMB Veterans Day Breakfast, serving 106 Veterans and their families.

Post Field Day is an all-day annual event put on by the American Legion Auxiliary, S.A.L. and the Legion Riders. Over 365 Veterans and family members attended and enjoyed food and games.

The Post Honor Guard honored Veterans during the year by providing services for 10 of their fallen comrades, conducting two school flag ceremonies, and purchasing flags for local cemeteries. Their Fuel Assistance Program helped pay the fuel costs of veterans who needed help.

To date, Moore Mart has sent out about 36,000 packages to New Hampshire military members since its inception nearly 11 years ago. Five times a year, Moore Mart sends out care packages to New Hampshire troops, all of them individually addressed to a specific service member. While most of the items are for the troops, some things in the packages are for village children, including candy and soccer balls. 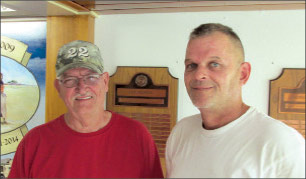 The Legion Riders, as projects of their own, organized trips and held fundraising events in support of many veterans in need, and donated over $1,360 to various Post projects, contributed $250 to Moore Mart, raised $4,768 for the Wounded Warriors in Pittsburg, N.H., and donated $1,000 to Toys for Tots.

So, you can see that American Legion Post 22 is so much more than just a building – it is flesh and blood and sweat and tears of real people giving all they can to respect those who have given their all, and to those who are still giving all they have!

Veterans in the area who would like to find out more about this Post and to visit are welcome to call (603) 448-3429. And, thank you for your service!