May 20, 2014by AdminLTNo CommentsAll, Elder Profile

Beverly Damren: At the Heart of West Lebanon 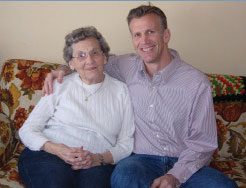 Beverly Damren with her son Jeff

Beverly Damren has been an energetic and sociable presence in West Lebanon for 65 years. She has made her mark as a parent, a Den Mother, and counselor. She has worked in the schools, in social service groups, and most recently putting a strong shoulder to the wheel to get the Kilton Public Library up and running. Growing up in Claremont during the Depression, she learned not to wait around for someone else to do things for her.

“Everybody walked – you didn’t think anything of it,” Bev recalls of her childhood. Her maternal grandparents had a farm, which her uncle later took over. The farm supplied some luxuries, such as butter, during the hard times of the Depression and World War II rationing, though the taste was “strong,” Bev remembers. And life in an old farmhouse wasn’t easy in winter. “They lived in the kitchen, which was huge, with a big woodstove.”

Claremont was a regional center in those days. “People went there to shop,” says Bev. “What changed it was the Interstate coming through. And then of course the changes in manufacturing.”

Bev was home from college in 1946 when she met Jerry Damren, recently out of the service. He had served in Italy, fighting at Monte Cassino. Taken prisoner, he spent eight months in a German prison camp late in the war. “There was not much to eat,” says Bev, describing his captivity. “It was the worst winter in quite a while, and there was no heat. You’ve heard of grass soup… But the worst thing was there was nothing to do. Boredom was the biggest problem.”

When Jerry returned, he finished up an education degree at Duke, where he had a baseball scholarship. His real love was history, recalls Bev, but when he moved back to New Hampshire he landed a job teaching social studies at West Lebanon’s high school, then in the Seminary Hill school building. Those first years he also “coached everything they had – well, not track.”

Sports were important, because there was not much for kids to do. “We figured to start in a small school, a good place to start, stay a couple of years and then move on,” Bev laughs. But Jerry stayed with the school his whole career, moving to Lebanon when the schools consolidated in the late 1950s.
Nowadays Lebanon and West Lebanon merge into one another, with commercial and residential development of various density linking the two centers, but the two towns felt very separate 60 years ago, Bev remembers, and because classes at the West Leb high school were so small the kids were very close. “Jerry took a job at the new high school to go with the kids,” she says. “It was very hard, especially for the kids who were going to be seniors.

At first, the couple lived in an apartment across the street from the school, a useful convenience since they had no car. In 1960 they moved to the house on Maple Street, just down the hill from Mt. Lebanon School, that is still Bev’s home.

While Jerry taught, Bev also involved herself with the schools, first as a volunteer, then subbing. “I really enjoyed Mt. Lebanon School,” she says. “I did everything but be the janitor! I even covered for the principal a few times.”

Bev and Jerry had four boys, three of whom have stayed in the area. While their claims to fame are various and impressive, it’s probably Jon who is familiar to the greatest number of people, since he is the owner and co-founder of Stateline Sports, which supplies equipment and clothing to most local schools, and also supports a wide range of recreational teams – an excellent example of a local, community-oriented business. 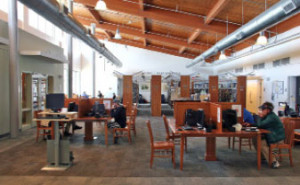 Bev’s biggest mark on the town is undoubtedly the new Kilton Public Library. The old West Lebanon library, a small, solid building on the west side of Main Street, has an interesting origin. The library on the Lebanon Green was one of almost 1,700 across the country built with assistance from Andrew Carnegie. When West Leb residents heard these plans, they gathered money from community dinners, dances, and other grassroots fundraising to build their own library. Both libraries opened in 1909, but West Lebanon opened first.

Bev remembers using “the little library down here,” but adds, “You were very limited in what you could do. Still, it was friendly: Miss Watson was the librarian there, for 50 years, and the kids used it; it was the only place to look things up.”

In the days before the Interstate, Jim Kilton graduated from Dartmouth and returned to his father’s drugstore, Red Cross Pharmacy on West Lebanon’s Main Street. (The building is now a chiropractic office.) He ran the pharmacy, which also had a popular soda fountain, for many years, known for his kindness, and for putting in long hours. He and his wife, Willena, had no children, and in 1999 they left generous bequests to local organizations, including Alice Peck Day Memorial Hospital, their church, and $1.3 million to renew or replace the library.

The library trustees, including Bev, who had joined the board in 1997, examined the possibility of on-site expansion. “But there wasn’t much space, and it just didn’t seem wise to put that much money into a limited site. The place on Main Street – it was a filling station when I moved here – was an unattractive empty lot for the main street of a city. And they were asking a tremendous price, almost a million dollars. When Dan [Smith, then board chair] called, they had a potential buyer. He said, ‘If anything changes, let me know.’”

Over the next ten years, the trustees bought the land, raised additional funds, found an architect, and shepherded the project to completion. Bev, who was board chair when the library opened in 2010, says, “The best advice we were given was to get an architect who’d done libraries before; they knew things we wouldn’t have thought of. And Walter Paine [former editor/publisher of the Valley News] came on the board. I don’t think we’d be where we are if he hadn’t joined in – so involved and hard-working.” Considering, she adds, “It was a lot of work, but worthwhile, and I think everyone’s happy with the outcome.”