Colburn Park: More Than a Public Space, A Public Service 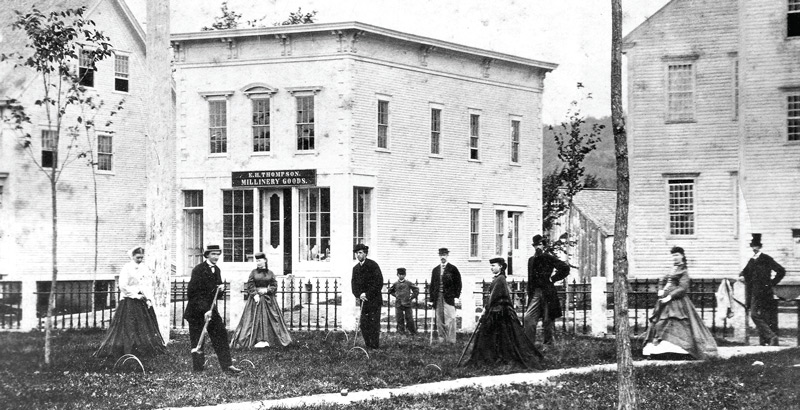 Lebanon’s Recreation Director Paul Coats scans Colburn Park and says, “You don’t get settings like this everywhere.” At 400 x 235 feet, Colburn Park is not huge, but what might be no more than a giant roundabout, is in fact the physical hub and community anchor of Lebanon’s compact downtown. This was never more apparent than in the summer of 2021, when Covid weary citizens took to the park for escape, diversion, and connection.

Coats first discovered New England while hiking the Appalachian Trail in 1998. When he returned home and saw a job opening for a recreation coordinator in Lebanon, he went for it. Since then, he’s been instrumental in the evolution of the park and the activities it hosts. Many of them may be new, but the little park’s ability to serve the community in a big way is a long-standing tradition.

The area that is now Colburn Park was given to the town by Robert Colburn, on the condition that it become the site for the town meetinghouse. Over time two turnpikes converged in the park, and in 1839, the town voted to move the meetinghouse to the present-day Lebanon City Hall.

In 1849, the State of New Hampshire agreed to route the turnpikes around the common, thus opening the opportunity to make the common a proper park. It was then graded and surrounded by the granite and wrought iron fence which still stands. The roadways became the four cross-park footpaths, and in 1884, the common officially became “Colburn Park.”

The park was consistently used for town meetings and auctions, speeches, celebrations, fairs and gatherings. Nicole Ford Burley, curator of Lebanon’s Historical Society says, “Colburn Park has had a bandstand since at least the mid-19th century, and concerts have always been regular occurrences.” Ford Burley tracks the park’s use through pictures dating back to the 1860s.

Pictures from 1910 show a crowded gathering of horse and buggies and a lone automobile. Soon Model T Fords filled the spaces around the park, their owners shopping at the bustling shopping district along Hanover Street. Photos from 1910 also show thick bundles of utility lines hanging on telephone poles around the park. Those were likely buried during the Urban Renewal that Lebanon undertook after the massive fire of 1964 destroyed the downtown shopping area, and Hanover Street was converted to today’s outdoor pedestrian mall.

Jude Dutille grew up in Lebanon and works in the downtown Lebanon jewelry store his family has owned since 1959. Growing up, Dutille remembers the summer fair in the park as a major social event. His graduating class from Lebanon High had their annual Alumni Day parade around the park, a tradition that endures today. Having worked in the store daily since 1981, he attests, “There’s more going on in the park than there used to be.”

Music remains the mainstay of events, anchored by the Thursday night Front Porch Music Series concerts that can draw up to 1000 people. A robust Farmers Market runs from May through September every Thursday 4 – 7pm, leading into the concerts. For the past five years, Movie Screen on the Green has offered outdoor movies every Friday in September. The winter highlight is the long tradition of the lighted Christmas tree, though Ford Burley notes that during the 1920s, a part of the park was flooded each winter to allow ice skating.

The fair may have stopped in the 90’s but a steady uptick in annual festivals and special events at the park include 4th of July festivities, the Food Truck Fest in August, Lebanon Rotary Club’s Brew Fest in September and LebFest: a joint venture between the Recreation Department and the Upper Valley Business Alliance to showcase local businesses.

The latest addition is the Lebanon Opera House Nexus Music and Arts Festival. When all performances were canceled for the summer of 2020, Joe Clifford, executive director of LOH envisioned and created Nexus Fest. The three-day event featured events and performances in three close venues – the Lebanon Mall, a stage behind the Opera House and Colburn Park. LOH also utilizes the park for “Silent Disco” nights, where a DJ transmits music through special glowing headphones.

Private businesses and municipal efforts have collaborated to vitalize the area surrounding Colburn Park. Coats points to the renovation of the Lebanon Opera House in 2001, and the subsequent additions of Salt Hill and Omer and Bob’s to Lebanon Mall mainstays like Village Pizzeria and Three Tomatoes. Lucky’s Coffee Garage has become a lively anchor at the northeast corner of the park and Roger’s House – the luxury hotel converted to senior housing in 1970 – recently had a significant facelift.

Covid, and the suspension of expensive city programs like the day camp and the pool, presented an unusual opportunity to divert funds to park improvements, like repaving the walkways to make every part of the park accessible to all.

“Colburn Park really is the epicenter of the arts in Lebanon,” says Clifford, noting the proximity of the City Center Ballet, the AVA gallery, and the Upper Valley Music Center. “I’m really proud of the city for putting resources to it.”

Coats’ tenure has seen steady upgrades at the park, from the modest but hugely popular play area to the Little Free Library kiosk, to the upgraded electrical outlets in and around the perimeter of the park. By the time of publication, two new streetlights will be installed, and with them, free town Wi-Fi.

Parking areas on the south side of the park that are allocated for up to three food trucks offer more options for park visitors, and opportunities for entrepreneurs. Lalo’s Taqueria, a popular eatery on the Lebanon Mall started out as a food truck on the park, as did Phnom Penh Sandwich Station which now has two permanent locations.

As with any well-trafficked park, healthy, vibrant trees are both the greatest invitation and the greatest ongoing challenge. When the native Elm trees died off in the late 20th century, they were replaced by hardier species, like the invasive red Norway maples that thrive there today. The long-term plan is to replace them with native trees.

Trees also figure into park lore. Dr Myrick Wood who lived on S. Park St, is said to have chased down the vandal who cut down the park’s former Christmas tree. The current tree was dedicated to Wood in 2006, with a plaque that stands guard next to it. Local war veterans are honored at two monuments on either side of the bandstand.

On a mild fall day, Amos Hoyt and Juliette King have pulled their motorized scooters up to enjoy the sun at a picnic table in the park. Hoyt lives across the street at Roger’s House and Juliette King lives a half mile away in Lebanon Towers. Hoyt comes to the park two to three times a day in warm weather, while King visits frequently. Both meet their respective great grandchildren over by the playground on occasion. When asked about their favorite event in the park Hoyt answers without hesitation: “All of them.”

Learn more about Colburn Park at the Lebanon Historical Society http://www.lebanonnhhistory.org. Reserve Colburn Park free for a group or personal event at lebanonnh.gov