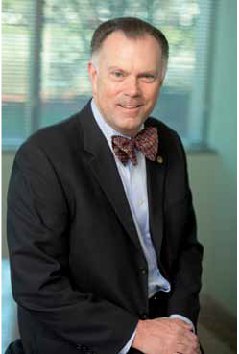 Let me tell you a little story about a big vision and the man who not only saw the importance of heralding the champions in our community, but actually did something about it. Steve Christy walks his talk and has become one of the City of Lebanon’s most active supporters.

In 1991, when I worked in Lebanon for Results Marketing, I met Steve Christy during a business meeting to discuss advertising and marketing strategies for Mascoma Savings Bank. At that time, the options in the area were limited to a few radio and print media choices. While not edgy in his philosophy or how he wished to present Mascoma’s image to the community, Steve was on the edge of something completely new and different: Good news. What a concept!

“I was very active in the Rotary Club for 20 some-odd years here in Lebanon,” said Steve.  “And it was virtually impossible to get anything printed in the local paper about our activities. We had speakers come in, and many were from local nonprofits. We discovered a common theme – that nobody could get their story out about the good things they were doing.

“One day I was driving back from the [Rotary] meeting at the old Lander’s Restaurant. I had asked the Valley News why they wouldn’t publish some of our events, and they said that it’s not newsworthy, and if we wanted to promote this material, we would need to buy an ad. 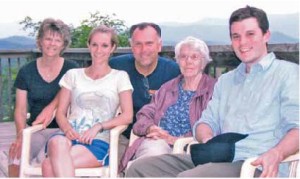 So, I got to thinking, ‘Gee, I wonder if we bought an ad once a month, or something like that…if the bank bought a single page and had it printed in a newspaper format and let these organizations write their pieces and submit them, and we will make it all fit and away we go.’”

So, when Steve brought up the idea of creating a “good news page” on a monthly basis that Results Marketing would write, edit, layout, and submit to the Valley News, I was completely on board. I had started an employee newsletter at my former company and loved the challenge and the do-good nature of this monthly project. The Community Champion was ready to go! 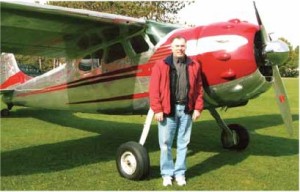 Steve with his Cessna 195

The idea was borne out of a genuine gesture of goodwill. But there were practical matters that reinforced this good idea, as well. Steve went on to say, “These organizations couldn’t afford to advertise, and it would have been kind of a waste of their charitable funds to buy advertising space to tell their story…. So the idea was to have a page available for any non-profit organization to talk about a particular activity or fundraiser or accomplishment.”

Getting organizations to contribute articles was not as easy as his original concept would have him believe. Often with only a handful of staff and volunteers doing all the work, many of the non-profit organizations needed and appreciated press and publicity but did not have the manpower or funds. It became my job to seek out individuals and organizations making a positive difference in the lives of fellow Upper Valley residents, and to share their stories in the most powerful and beneficial way. I felt like Santa Claus and I loved it!

Steve’s “good news page” vision came at a time when the Northeast was still in a deep economic recession and people were feeling pretty low. The bleak headlines and broadcasts didn’t help, and Steve liked the idea of reminding people of the good they’re surrounded by.

“I thought this would be a good way to give people some optimism about their fellow man and about things going on in the community that were positive,” he said. “People were being helped and good things were happening.”

So, that is what we did each month for several years. We created a mock front page of a newspaper and featured a variety of organizations to pique all areas of interest. We even made a faux transaction ad section featuring event listings to help boost community participation.

Being the one to spread good news was also a good idea from a business perspective; it helped reinforce the fact that Mascoma Savings Bank is a philanthropic leader known for giving back to the community. When businesses help each other by sharing financial resources, expertise, willing hands, or creative ideas, everyone benefits. And those who walk the talk really stand out! 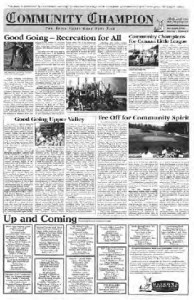 It’s no surprise that Steve Christy would come up with such an altruistic idea benefitting so many. He has always been one for hard work and independence while finding ways to give of his time for the benefit of others.

Raised in the south, Steve started coming to New Hampshire in the mid-’60s. During his high school and college summers, he worked on the Mt. Washington Cog Railway doing a variety of jobs. “Three days before my 19th birthday, I qualified to become an engineer. I didn’t enjoy running the train three or four trips up the mountain every day – it got kind of boring! But I really enjoyed my time in the machine shop. Since no one was making steam locomotives any more, if we wanted something, we had to build it!” After the summer of 1973, it was time for Steve to leave the railroad and settle down; he would be getting married in the fall.

“I needed to get a real job, so I walked into the bank, here, and met with Reuben Cole, who was the president, and a few days later he offered me a job,” Steve said.

Except for a five-year stint working for another local venture, Steve has been with Mascoma Savings Bank ever since, and its President since 1990.

According to Steve, carrying out Mascoma Savings Bank’s mission – to make the best interests of the community a top priority – has not been a challenge at all. It suits his philosophy and the way he has tried to live his life. 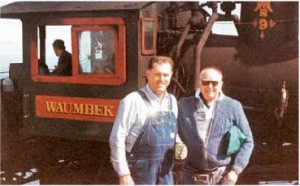 Steve with Reuben Cole (past President of MSB). Steve took a trainload of Bank employees to the top of Mt. Washington about 15 years ago.

Steve and his wife, Donna, have lived in Lebanon since 1973 and raised two children, both of whom went through the Lebanon school system and have since graduated from college and now live in the Big Apple. Steve prefers the simple life that Lebanon offers: “I have a seven-minute commute. Two stop signs. Beautiful, beautiful.”

As Steve has amply demonstrated, he is a true “community champion.” He shows that when one believes in and actively supports good people and organizations, it creates a ripple effect of positive citizenry for generations to come.

And The Lebanon Times is here to keep it going!