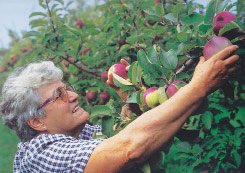 Though never a magazine centerfold, Adele was Miss December in the USDA’s 2000 calendar featuring century-old (or more) farms.

She didn’t marry to make this so, but Adele Patch has the perfect name. Over the years she’s earned fame locally, nationally, and even internationally for her quilts, her patchwork quilts. But she married for love, in storybook style.

The story started, classically, with a tough childhood in northern New Hampshire, where Adele was born in 1931, in the depth of the Depression.

“I was a skinny kid,” she says, one of 13 in an often tense blended family. Enough food was hard to come by, never mind extra for piling on the pounds. When she had just turned seven, the 1938 hurricane flattened the family’s house and blew out all the windows in the barn. Since the house was no longer habitable, the family moved to the Monroe Road in West Bath, where they acquired three adjacent farms for taxes.

“The muscular strength that it gave…”

For much of the year, the house had no running water. There was a spring piped in, but it would dry up in the summer and freeze up in the winter. Adele carried water from the brook.

The family had a grade herd of about 25 cows. From a young age, Adele hand-milked 10 of them, developing a grip she still demonstrates with delight.

Quilt: A pieced quilt from 1930s flour sacks. The sacks were printed with different designs. In this quilt the only fabric that appears regularly are the small dark squares with white polka dots in the center of the 9-patch blocks. Pins: Adele also collects and displays ornamental pins. Adele with quiltwork: Adele Patch, wearing one of the applique sweatshirts she makes and sells, shows off one of her quilts.

“I got this strong by pulling teats,” she exclaims, teasing her visitor with another risqué expression. 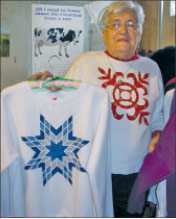 She left school after eighth grade and worked at her family’s farm. She preferred outdoor work. In 1950 she used a horse to pull a power line a mile through the woods to reach the farm. Her stepfather then bought milking machines—but her hand-milking talent was about to change her life.

In August 1952, Adele, not quite 21 years old, went to the Grafton County Field Day at the county farm in North Haverhill, where she won the milking contest. The prize was a complete set of fancy dinnerware, but, says Adele, “I didn’t want dishes, I needed shelves for my five guns!” It wasn’t long, though, before household furnishings came in handy.

Don Patch, a young farmer from Lebanon, was watching the contest. Don was impressed, and not just by Adele’s prowess with the cow. As he eventually told her, “When you smiled, your eyes danced.” The couple was married three months later, the beginning of a happy marriage of 51 years until Don’s death in 2003. 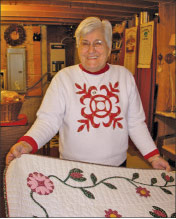 But what about that quilting? Adele needed maternity clothes when she was carrying the first of her three children. With characteristic boldness, she bought a cheap sewing machine and taught herself how to make custom-fitted clothes.

“I didn’t have five cents,” she recalls. “I learned on my own. I figure, if you’re not making mistakes, you’re not learning!” She adds, “I started taking in sewing. I didn’t like alterations, but I did it because I needed the money.”

She must have made a lot of mistakes, because her sewing is now extremely polished!

In 1980, Adele took a quilting class at Lebanon College. After the class, students from the group began meeting in each other’s homes and eventually formed the Northern Lights quilting guild, which now boasts more than 100 members.

Adele is constantly busy with quilts in different stages of completion. Close examination of each quilt reveals not just stunning workmanship but also intricacies of design that only unveil themselves to study.

“I’ve donated quilts for many causes,” says Adele. A few of the beneficiaries of these gifts are the City Hall Ballet, Habitat for Humanity, and the Lebanon Methodist Church, which she joined when she married.

The bell outside the church, on School Street, is also her gift, a memorial to her husband. Her eyes twinkle as she says, “Yes, the four F-words are important to me—faith, family, friends, and fabric!”
Quilts are not the only things Adele gives away. Her freezer is stocked with loaves of homemade bread, and her cupboard with rows of neatly labeled jars of jam. Departing visitors have these goodies pressed into their hands. “I’m a giving person,” admits Adele, with major understatement.