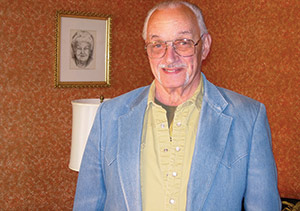 I’d no more than joined the Lebanon Historical Society when they appointed me curator,” says Ed Ashey, who is also Lebanon’s City Historian, the man in charge of fielding questions about Lebanon’s past. Though not formally trained in museum work, Ed says, “I have gone to museums forever. I knew you needed accession numbers on things, records of the donor, condition, and so forth.” He’s worked hard going through piles of photos and other records, often posting pictures on the group’s website, LebanonNHHistory.org, or on the Facebook page “You know you grew up in the Upper Valley if…”

Ed’s interest in history started when he was “just a little kid. I read books on Greek and Roman history but I knew I’d never go over there,” so his interest in that region faded. The taste for history remained and became an interest in the early days of New England. Ed became good friends with Robert Leavitt and his grandfather. “They had museums in their own home! Old muskets, Civil War things like uniforms, photos, and diaries.”

Back in his childhood, in the 1940s, Ed says, “there was an open dump in West Lebanon. If someone dumped something like a box of photos, or scrapbooks, or even photo albums, people would pull it out and take it to Leavitt because they knew he was interested. Now stuff like that is just gone.” Much of what the Lebanon Historical Society now owns was collected by the Leavitts.

Ed was born in West Newbury, Vt. His father worked as a farmhand, but it was a poor way to make a living. After a period at the Haverhill town farm, the family moved to a transient camp in Lebanon, but they didn’t need to stay there long, thanks to the local woolen industry. 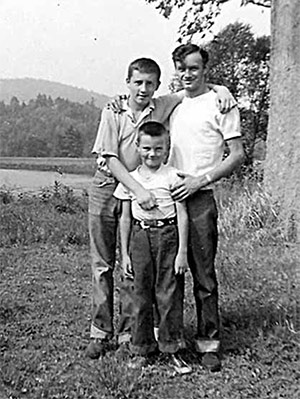 Ed’s father found a job in a woolen mill off Mechanic Street. Ed and his two younger brothers grew up in a big apartment building on Mechanic Street where Kleen Laundry is now. Sometimes Ed would take his father’s lunch down to him, walking among the huge looms. “They wouldn’t allow that nowadays!” he laughs, but he was careful to keep hands and clothes away from the busy machines.

In some mills, the machines were powered by belts that ran off one long drive shaft. If one of the bearings supporting the shaft needed replacing the whole operation had to be shut down; the shaft was slid out as far as the bad bearing, and then slid back through again. It was a time-consuming and tricky operation. A local person came up with the idea of a bearing that could be opened up to fit over the shaft, a “split ball-bearing,” enabling major savings in maintenance.

The Mascoma River provided power for many of the mills in the early years, but in the 1940s and ’50s they were coal-powered. Ed remembers how his mother would hang sheets out overnight to dry and find them tinged with soot in the morning. Railroad engines also spewed soot.

Ed himself worked from an early age, with a paper route as a young boy and then a part-time job in a department store. Later he worked at the Baltic Mill in Enfield, but found the workers a very tight-knit group. It was hard to get along, being an outsider. Finally he quit. He was getting ready to apply for unemployment when he was offered a job selling clothes. “I can’t even buy my own,” he objected, and instead found a position doing sales, delivery, and repairs with Western Auto, a hard-goods department store.

Eventually Ed decided to go out on his own with Ed’s Bike and Sports Shop, which was located next to the now-closing-but-for-many-years-a-local-landmark store, Hirsch’s. The advent of big box stores—themselves now struggling against internet sales—made running a small specialty store untenable. Ed returned to Western Auto and then moved to Wilson Tire, working as a manager. He’s a little hazy on the dates of some of these endeavors, admitting “my hard drive is overloaded.”

Ed with his brothers in the 1940s; David Pardoe taking the tour with Ed Ashey; Ed as a youngster on the town; the Marion Carter House, view from the main entrance.

A major trauma in Ed’s life was the loss in 2006 of his wife, Beverly. Her parents may have been less than thrilled when Ed first appeared. “I had a license, and I was driving around picking up girls,” he reminisces with a sly grin. “She lived over in White River Junction, what we called ‘White Town.’” A point of contact with the older generation was Beverly’s grandfather, who was a railroad man. Ed had always been interested in trains.

The couple were married more than 50 years, and Ed tasted despair with her death. His children swung into action, keeping frequent contact. “They got me going again, so I could take an interest again,” he recalls with gratitude.

One of the changes Ed brings up when talking about Lebanon and environs is the loss of farms. “I remember when there were farms everywhere,” he says, “but now they’re smaller—farmers can’t afford the huge parcels they’d need to compete. The Patch family sold their herd this year,” he adds in a tone of regret.

Still, anyone as deeply knowledgeable about the city’s history as Ed is knows that the only constant is change. He would love to see a larger and more active membership in the city’s historical society, which is small “even though dues are amazingly cheap—$10 a year.”

Ed shows a visitor around the Marion Carter house off Colburn Park near the AVA Gallery and Art Center. Marion was the wife of H.W. Carter, the hugely successful 19th-century manufacturer of sturdy work clothes who gave his name and support to various community ventures. “He was known as ‘the Prince of Merchants,’” says Ed.

The AVA Gallery building was his factory. The house still displays Marion’s furnishings, including mementos of her travels, which included a trip to Europe and travels in the American West, where she admired and ordered Asian furniture and artifacts.

Nifty items abound in the house, where the historical society holds its monthly meetings. In a shed off the kitchen are the large doors where the ice deliveryman loaded the icebox; inside that same icebox displays dressier doors for the household staff. The second floor includes display cases of Lebanon historical items. A very large framed hair wreath shows the artful weaving of flowery designs that Victorians developed into an art for memorializing dead relatives. Myriad other items catch the eye and the imagination. The Carter House is the property of a trust. It’s not practical to open it as a museum. Even student groups cannot be guided through; many rooms are too small for the usual class size, with fragile items in open displays.

The historical society would love to have a building of its own to use as a museum, but lacks funds or personnel for such an undertaking. For now, discovering Lebanon history can best be accomplished by joining the enthusiasts conversing online and at the historical society.