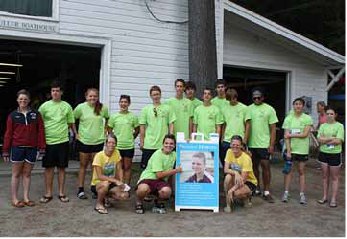 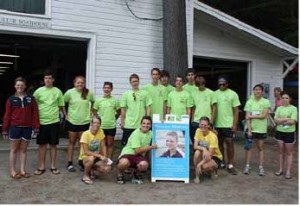 While we remain held firmly in winter’s icy grip here in the Upper Valley, many residents can’t resist the opportunity to let their minds drift off to the lazy, hazy days of July.

Specifically, July 12, 2014, when once again hordes of excited, dedicated, and determined individuals from every walk of life will descend upon the town of Hanover for the 33rd Annual Prouty fundraiser, staged by the Friends of the Norris Cotton Cancer Center in Lebanon.

That prestigious event has become legendary and established itself as the biggest charity fundraiser in Northern New England, incorporating more than 4,500 people from more than 30 states who gather to celebrate life, hope, and the defeat of cancer, an insidious disease that has struck down so many.

Last year the Prouty surpassed its fundraising goal of $2.75 million, and the praise for that success is heaped upon the army of volunteers and participants who take over the local highways and byways of the Upper Valley.

What makes this well-oiled machine run so smoothly, considering the enormity of the task?

Housed almost in obscurity in the ultra-modern Norris Cotton Cancer Center facility, you will find the true “hidden heroes,” the Administrative Team that implements the mission of the Friends of Norris Cotton Board of Directors. That intrepid staff has steadfastly labored and witnessed the dollar total in the Prouty’s 32-year history exceed $20 million.

While these stalwart six do their work in a professional and efficient manner, unlike the often harsh environment of the corporate world, these adminis-trators agree that while the task is labor intensive, the job involves a warm emotional connection.

“When I worked my first Prouty I was focused on the logistics of my job, not anticipating the emotional factor,” explained Susan Whelihan. “Watching and hearing the participants’ stories that day brought the emotional piece to the forefront.”

Senior Program Manager Rebecca Gray can confirm that emotional factor of working for such an impactful cause. She is a 16-year breast cancer survivor who served as a consumer reviewer for the Department of Defense and several grant applications by Norris Cotton Cancer Center researchers. Gray’s daily tasks brings her up close and personal with her work.

“Emotional? Oh, very much so,” Gray explained. “You walk through the cancer center on a daily basis and see friends and neighbors waiting for their chemotherapy, and it’s a constant reminder. However, the work becomes joyous as well. I have been in fundraising all my life and have found it extremely rewarding.”

Program Coordinator Christine Pariseau-Telge handles the southern part of New Hampshire and is also a veteran of fundraising programs. She discovered that the Prouty event has become something very, very special.

“I am an attorney by trade, and after I accepted this position I found out quickly that perhaps it doesn’t fill my wallet but it certainly fills my heart. It’s extremely heartwarming. Everywhere you look there are unbelievable stories.”

Pariseau-Telge coordinates the Prouty Ultimate, a two-day, 200-mile ride that starts in Manchester on the Friday before the Prouty, and travels to Hanover to join the 3,000-plus Prouty cyclists on Saturday. The riders that originate in Manchester each raise $2,500 and the total contribution from that group tops the $300,000 mark.

When all six of the administrative staff were pressed for a one-word answer to best describe their efforts for the Friends of the Norris Cotton Cancer Center, one single response appeared to dominate. That word was “organize.” Attending to the thousands of details surrounding such a premier event is a full-time, Herculean task that requires not only time, but special skills.

“Communicate and plan sums it up for me,” said Whelihan. “And volunteers. We have a list of over 2,000 volunteers that we can call upon for any given occasion. That is a real asset.”

One three-member volunteer team from West Lebanon serves as a shining example: Steve Silver, who is employed at Dartmouth College; his wife Deb Springhorn, a Lebanon High School teacher; and their son Ariel, a freshman at Kimball Union Academy. This trio will tackle their 10th Prouty this July and, thanks to their devoted effort to participate and to recruit teammates and volunteers, estimate they have raised nearly $30,000 for the cause.

“Since Steve will be celebrating his 60th birthday this year, he wants to up our total raised to $6,000,” said Springhorn. “That may be a little optimistic but we will try. One of the most important tasks we take on occurs on the Friday of the event, when we work on the Green Team. That effort greatly reduces the enormous amount of trash generated down to just a small amount thanks to recycling. It’s a very important part of the event.”

The emotional impact of working the Prouty resonates with the local family, as both Silver and Springhorn have lost parents to cancer. Their enthusiasm is contagious, and Silver adds a very special touch for the teammates they assemble. Well known for his artistry with pottery, he uses his talent well to create an added incentive for participation.

“Each year I hand-craft a very special bowl and put all the names into it,” Silver said. “At the end I draw out a name, and they receive the bowl. It’s a way of giving back to them.”

While the next Prouty remains months away, the hard work behind the scenes continues. And as Jean Brown has pointed out, “The Prouty has taken on a life of its own.”

Mark Israel, Director of the Norris Cotton Cancer center, explains the mission with precise eloquence: “Sometimes people ask me if there is a secret weapon against cancer. I usually reply that no, there is no secret weapon, but there is the Prouty. The money raised through your efforts as you bike, walk, row, and now golf is making a significant difference to fight the many diseases we call cancer.”

To answer the call this July, all you have to do is participate or volunteer. The “Hidden Heroes” will take it from there.