February 19, 2016by AdminLTNo CommentsAll, For The Love Of It 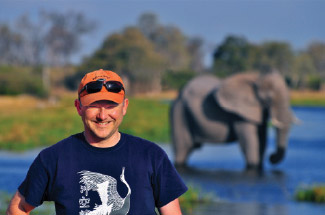 Now living in Lebanon, Dan grew up in Rumford, Maine. In the early 1980s an assembly lecture (by Charles Darwin’s great-grandson) introduced him to African game and environment. The explorer suggested that Dan and a friend accompany him on his next trip, which seemed like pie in the sky. But relatives from LA who worked in commercial aviation insisted he should not miss this opportunity. After the eight-week, “bare-bones and sometimes kind of disorganized” trip to South Africa, Namibia, and Botswana, Dan was hooked. The enormous landscape, the game seen at close quarters, the people he met, the air and climate, even the smells—everything was different. “I’d never been out of Maine before,” he recalls with his easy smile.

Dan began to calculate how he could organize his life so as to return to those captivating terrains, people, and creatures—and introduce them to others. Rather than becoming a cog in a large travel company—it’d become just a job, he says—Dan studied the sciences that brought him to the Upper Valley for a biotech job with Glycofi at Centerra. 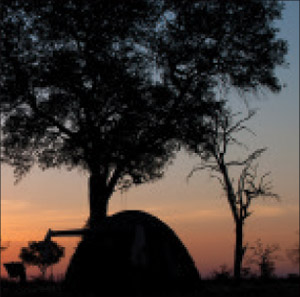 The idea of running trips did not die, however. “I knew nothing about the travel industry,” Dan says, recalling his 2010 trip to the New York Times travel expo. “It was huge, high-end booths everywhere, and people asked me, ‘Who’s your operator?’ and I said ‘What’s an operator?’” Operators are the people who run the trips in Africa, locals who arrange permits, transit, meals—in fact, exactly the folks he’s been trying to connect with. Eventually he met two men from Botswana who were tour operators trying to find an agent.

One step at a time, Dan built the connections and knowledge he’d need to run a tour business. He went multiple times to southern Africa to try trips with different operators, at different levels of fanciness; he made presentations to groups of potential travelers; and he set up a course with Osher@Dartmouth, a Lifelong Learning program, culminating in a trip to Botswana. Now he’s starting to get repeat clients. Who would not want to see the beyond-gigantic red sand dunes of Namibia, or fabled Victoria Falls on the Zambezi River—the falls are twice as high as Niagara, and twice as wide as Horseshoe Falls? And in between are game parks, and local villages where Dan’s trip operators have connections. Trips may stop in a village, or travelers may walk to school with some of the children. 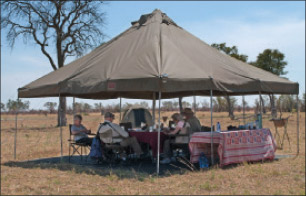 Tourism offers local people an opportunity to enhance their subsistence farming, and gives them a stake in protecting the animals, an important issue, since animals straying from a park may damage crops. The training program for a guide’s license is rigorous and long, but produces guides with detailed knowledge of their area’s natural history, as well as of functional concerns like safety. Scary stories come out of Africa, admits Dan, but areas where he tours are quite safe. When the Ebola virus made news in Sierra Leone and its neighbors, he got a lot of worried questions, “but Africa is big,” he says. “That area is closer to Europe than to southern Africa.” ” Addressing another concern he adds, “I’ve made 10 or 11 trips to Africa, and I’ve only seen one snake. It was crossing the road.”

Dan has specialized in organizing trips for adventurous travelers who want to get close to the land, people, and animals. Most of his trips involve camping in remote sites. On some trips you pitch your own tent and help with cooking; on others, extra staff people take care of these chores. Helping out, and staying in tents rather than game lodges cuts costs. There are different levels available, says Dan, but for around $1600 for 8 days, “you can see the same animals as people paying $10,000.”

Daily game-viewing excursions usually take place in open Land Cruisers, with six to eight people, including the guide. Some trips also feature walking expeditions, for fine-scale observation. Special-interest trips are available; Dan is working with Bill Shepard of Thetford, a noted local birder, to set up a birding trip. 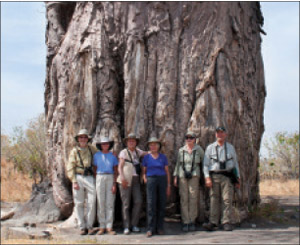 Upper Valley locals on safari with Dan pose in front of a Baobab Tree.

Grantham’s Barb Jones went to Botswana with GrassTrack Safaris and she’s heading back for a Namibia trip. “What I remember most,” she says, “is how we hurry in our daily lives, but there we’d spend lots of time just watching animals, seeing what they did. It was amazingly relaxing.” Other aspects of the trip required energy. “If I could add to the list of preparations and things to bring that the company gave us, I’d say to climb rock walls at a gym, because the vehicles are so high. You climb to get into them!” Barb also advises an arm exercise: raising and lowering a pair of binoculars again and again. And practicing squatting, for behind-a-bush trips. Her final recommendation is a comic warning about game drive travel: she suggests going through a car wash with the windows down to simulate branches poking into the Land Cruiser in tight places. Some surprises are best left for the safari itself!

The amount of research just to find local operators, to say nothing of sorting out the good ones, intimidates most anyone who would like to travel to Africa. Dan aims to remove barriers. “I’m trying to show people you can go into the wilderness in Africa and not spend a fortune.”