John Fenley: Igniting Hope in Others 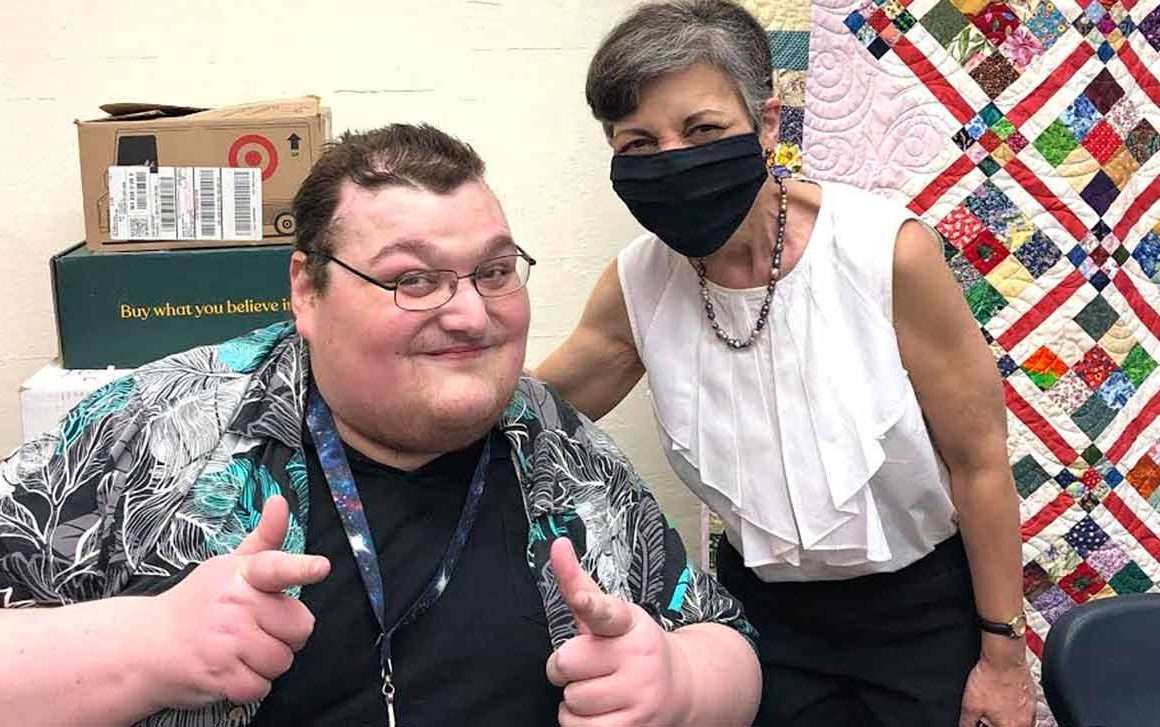 If there is one philosophy that Lebanon resident John Fenley lives by, it is that which was imparted to him by his parents years ago.

For John, these words have had significant meaning considering his diagnosis of a craniopharyngioma brain tumor at age three which required five surgeries to successfully remove. And although the resulting brain injury created obstacles, he strives to define himself by his abilities rather than his disabilities.

“My brain tumor has affected my life in countless ways, but I have never allowed it to define my life,” says John. “People of a pessimistic mindset would say it’s so unfair that I had to suffer five brain surgeries. But I would remind them of how blessed I am. I had a strong, loving family to see me through the darkest moments. I was fortunate enough to be born in a time when performing these difficult surgeries has been possible. And, in a time when medicine is advanced enough to provide me hormones in pill form to replace what was lost. I was also fortunate enough to have been born in a country that boasts some of the best hospitals in the world. See? I am blessed.”

Born in Carmel, NY in 1985 to Madeline and Dennis Fenley, John is the youngest of two boys. His older brother Chris was eager to welcome him into a family that values kindness and caring.

“My roots are important to me,” says John. “I’m one-quarter Irish, one-quarter German, and half Italian. Ha! Maybe that’s why I have a loud and boisterous charm like many Irish-Italians!”

When he was five, his parents divorced, so John spent summers with his father in Virginia and Thanksgivings with his extended family in Montauk, Long Island. His mother moved to Hanover, and worked at the Tuck School. “She has been diagnosed with cancer three times and is, without a doubt, the strongest person I know,” says John. “She is my hero.”

Attending the Hanover Ray School and Hanover High School (class of ’04), John forged ahead to Keene State College but “washed out”, as he calls it, with a medical leave – a sure disappointment for a young man who dreamed of becoming an elementary school teacher. He sought out a neuropsychologist who explained that his years at high school were difficult due to frontal lobe scarring which can manifest itself in disorganization, forgetfulness, and lack of initiative – often misinterpreted as laziness by others.

“When that puzzle piece clicked into place, I remember bitterly proclaiming, ‘So, between my hypothalamic damage and frontal lobe scar tissue, Doc, you are basically telling me I have Fat and Lazy Disorder?’”

John’s tumor continued to grow back. It was, as he describes, like an “uninvited, invisible enemy that kept lurking in my skull.” A majority of his childhood memories are fuzzy, hospital scenes. He had brain surgery at ages, 3, 5, 7, and 9. After his parents’ divorce, his mother and father would trade off days with John and his brother at the New York Presbyterian Hospital. “I feel bad about how scary it must have been for Chris growing up with a little brother in and out of the hospital,” said John. “I feel like it forced him into the role of the silent strong one in the family.”

Once back on his feet, John joined SOAR (Speaking About Human Rights), formerly Upper Valley Neighbors, an advocacy chapter based in Lebanon. He had served as its president from 2008 to 2018. In 2012 he was elected President of the statewide advocacy organization, People First of New Hampshire. In that same year, John was appointed to the Council on Developmental Disabilities by the Governor and helped create Advocate NH – an organization that plans and delivers the annual statewide disability rights conference. In 2013 he joined the Self Advocacy Leadership Team (SALT) a group that addresses issues of abuse and neglect, accessible transportation, and mentorship of young advocates. Through his extensive involvement in these organizations, John has had many opportunities to testify at the New Hampshire State House on issues of health and human services.

Then, twenty-four years after he thought he had vanquished his invisible foe, a CAT scan in 2018 revealed that his childhood nightmare had returned. John went under the knife for his fifth brain surgery. “I wasn’t quite as spongy and resilient as I was when I was a kid,” he said. “Now I was an overweight, thirty-three-old adult, and I was terrified.”

This most recent surgery has taught John that “nothing is sure in life”, that “things can go from bad to worse in the blink of an eye.” And yet – as his parents taught him – he forges on; and for the last seven years, in a big way.

John is a co-founder of Spark! Community Center in Lebanon – a place where adults with special needs, their families and caregivers, and members of the Upper Valley community can come together and take part in fun and educational activities and whose vision is “to be a vibrant center that embraces a diverse integrated community where all participants are inspired to realize their fullest personal potential”.

Although he spent years developing a career in self-advocacy, John realized that other disabled individuals were also in need of a life goal. It angered him that many were wandering aimlessly during their days off.

“I felt they deserved better,” John said. “I envisioned a warm and welcoming space where they could pursue their passions for free with community members of all shapes and sizes. I called it Spark! with the hope that it would ‘spark’ creativity and conversations of equality. Everyone has a talent or ‘spark’ worth sharing.”

So, John met with a local mother of an adult-disabled child and shared his dream. With her business degree, she used her professional acumen to help file for a 501C3 status and enlist a board of directors to serve the new organization. Spark! Community Center went from dream to reality.

John has served as Community Outreach Coordinator since the grand opening of Spark! in 2014.

“I love my job because it allows me to pursue my passion of art by creating graphic design elements for flyers and announcements,” John says. He makes drawings of the nonprofit’s mascot, Sparky the Spark Plug, to promote upcoming classes and events. “And in an ironic twist of fate, I guess I did become a teacher! I have the joy of teaching virtual classes on Zoom every day. Right now, I am teaching a Virtual Road Trip class every Monday in which we’re exploring the East Coast states from Maine to Florida and learning fun facts about their state symbols, famous residents, history, and cool places to visit. What I love about the center is that it has endless possibilities, and we can add new and different activities based on community interest.”

Spark! Community Center Executive Director Melissa Valcourt has known John since February 2020 when she began working at Spark! “John is a very dependable employee and the founder of Spark! Community Center in 2014, who created and followed the vision and mission statements to a T,” she said. “He is currently the Outreach Specialist and teaches 65% off our online classes daily as well as the lead person for our Friday Fun Night events. He is always thinking of others and making sure that everyone feels included in whatever we are doing. John is a huge advocate for the disability community and is a great speaker. He has had some medical conditions that put him in a coma a few years ago but has overcome all of these roadblocks and is thriving at 15 hours a week with Spark!”

John has a vision for the future of Spark! With enough local community donations, he hopes to move Spark! into a bigger, more vibrant space.

“I see a future where more families with young children, teens, and seniors all come to take advantage of what Spark! has to offer,” he said. “And I will continue to advocate for the voiceless and strive to be a friend and mentor to the people who come through our door. And maybe someday, if I can find the time, I will publish a book about my life and faith, and what I have learned.”