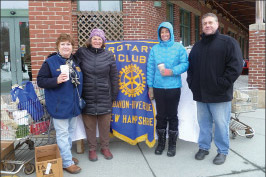 Editor’s Note: Over the next few issues, the Lebanon Times’ “Community Impact” page will feature some of the many civic organizations that make a positive, local and global impact on our shared community.

All around the world, people with the vision that life can be improved, are working to make it happen. But, they also understand that they cannot accomplish change alone. So they join with like-minded people in organized groups where much can be accomplished.

One such organization that is working to improve lives locally and around the world is Rotary. The Rotary Club of Lebanon and Lebanon-Riverside Rotary have separate officers, members and projects, but the two clubs join forces many times during the year to work as a team.

Rotary International is a worldwide service organization consisting of over 1.2 million Rotarians who volunteer their efforts on local and international service projects. It is non-political, non-sectarian, open to men and women of all businesses and professions, all faiths, and all walks of life.

In 1905, Paul Harris organized the first Rotary Club in Chicago, “in fellowship and friendship,” with three clients: Silvester Schele, Gustavus Loehr, and Hiram Shorey. His initial goal was to create a club of professional and businessmen for friendship and fellowship, but he soon realized that Rotary needed a greater purpose. During his presidency in 1907, the club initiated its first public service project, the construction of public toilets in Chicago. This step transformed Rotary into the world’s first Service Club. And, in 1989 the Council on Legislation voted to admit women into Rotary clubs worldwide.

Locally, the 40 active members of the Lebanon Club work hard year-round, holding events that help provide funding for a variety of organizations, and working on projects to benefit the area.

This year’s 36th Annual Rotary Auction on September 19, will benefit The Upper Valley Haven’s Backpack Program which sends a pack of nutritional food home with students for the weekend.

Another local event is the bi-annual Mascoma River Cleanup, headed up (for over 30 years) by Rotarian Dr. Ernst Oidtmann. Volunteers of Rotary and the public wade right into the river and pull out all kinds of things that are collected and sent for recycling.

The “String of Pearls” project was envisioned as a community-wide initiative to preserve and enhance several areas along the Mascoma River for public recreation and enjoyment. It includes building a riverfront trail system connecting the public parks along the Mascoma. A few of the “pearls” that presently exist on this trail include Baker’s Crossing Conservation Area, Glen Road Skate Park, Centennial Fountain, Canillas Park walkway, and Twin Rivers.

The annual All-You-Can-Eat Pie Buffet is held on July 4th at the Senior Center in Lebanon to benefit the on-going fight against Polio. Rotary, along with its partners, has reduced polio cases by 99 percent worldwide since the first project to vaccinate children in the Philippines in 1979. Only two countries presently have polio cases: Pakistan and Afghanistan. Rotarians have helped immunize more than two billion children against polio in 122 countries. At the same time, Rotary has been the largest private sector donor to polio eradication, committing over $600 million to the effort.

Non-Rotary people interested in the possibility of joining Rotary, are welcome to attend a breakfast meeting as guest of the club.
Projects of the L-R Club
• Sponsor and work at Listen dinners once a month
• Hold a Food Drive 4 times a year at Lebanon Coop to benefit Listen
• Hold their annual major fund-raiser, a Golf Tournament, at Eastman to benefit the Club’s many charities, such as:
– Supporting both Lebanon libraries in various ways
– On-going support of PolioPlus
• Sending two teams to El Salvador to help build homes for villagers in need
• Building the Riverside Community Park (Glen Road skate park) and continuing support. This club arranged to have the pavilion moved from the old hospital to Glen Road.
• Awarding $1,000 to SPARK to help buy office supplies when the organization was started.
For more info, visit www.lebanonriversiderotary.org

Knowing that dirty water brings ill health to so many around the world, Rotary has undertaken projects to bring clean water to many of the villages in Ghana, Africa. Members of the Lebanon Club have gone to Ghana twice to work with members of their Rotary Clubs. Just having clean water would help eliminate 10% of diseases worldwide!

The Lebanon Club meets every Thursday from 12:15 – 1:30 p.m. in the Dwinell Room at Harvest Hill on the Alice Peck Day Memorial Hospital grounds. This includes lunch and a brief business meeting often with speakers. Visitors interested in learning more about Rotary and membership are welcome to attend a meeting.

The Lebanon-Riverside club gathers at 7:15 a.m. on Tuesdays, also in the Dwinell Room, for a breakfast meeting.

To learn more about the Rotary Club of Lebanon, please visit www.rotarylebanonnh.org, or call Don MacMeekin, this year’s president, at 603-667-6161. For more complete information about Rotary in general, please go to www.RotaryInternational.org.