The recent closing of Lebanon College was a blow to Lebanon, and the Upper Valley.  For over 50 years, area residents enrolled in a wide range of courses through the now-closed school. Whether taking a class for personal enrichment, or to enter a program of study for a change of career, Lebanon College was a good, local alternative for prospective students.

Despite the school’s expansion in the late 2000s with the purchase of the former Shoetorium building downtown, recent years saw a slowdown in enrollment at the school. With a debt level of over $2 million, the decision to close down operations became unavoidable in the summer of 2014.  Further classes were cancelled, and the school’s facilities on the Mall in Lebanon were soon vacated.

Enter River Valley Community College into the picture. The college, with its main campus in Claremont, and a satellite campus in Keene, began looking at the prospect of offering classes in Lebanon. Dr. Alicia Harvey-Smith, president of River Valley Community College (RVCC), said area business and community leaders reached out to her institution to discuss the possibility of RVCC moving into the former Lebanon College facilities.  After extensive internal discussions, and a wide-reaching feasibility study about expanding to Lebanon, school authorities determined there was a tremendous upside for RVCC coming to Lebanon.  Discussions with Upper Valley leaders confirmed the need for an institution with the classes and programs RVCC offers.

A $1.6 million loan from the United States Department of Agriculture to the Community College System of New Hampshire allowed the deal to become a reality.  The loan resulted from the 2014 Farm Bill, which directed the USDA to work more closely with the nation’s community colleges. With the loan, the Community College System bought the former Lebanon College facilities.

Dr. Harvey-Smith, in her third year as RVCC president, said her school attracts a wide range of students to the classroom. “We serve adult learners, and traditional students,” she said.  In addition, she finds many RVCC students are the first in their families to attend college.  “We get many first generation college students,” said Dr. Harvey-Smith.

RVCC is now ready to accept those students, as the first classes offered through the Lebanon school begin in January of 2016.  Though the first classes begin this winter, the official grand opening of the school is set for later next summer. Within a reasonable time period, perhaps two years, RVCC hopes to have about 500 students attending the Lebanon facility.  RVCC currently has about 1,000 students enrolled at their Keene and Claremont campuses.

In preparing to open for classes in Lebanon, this fall RVCC held open house meetings with interested business and educational groups, and with the community at-large.

What will attract students to the Lebanon campus?  “We’re committed to quality and affordability,” said Dr. Harvey-Smith.  RVCC is a fully accredited institution, “Held to the same standards as the major schools,” she added.

The affordability factor is important for students looking to eventually receive a four-year degree.  Students can begin their studies at RVCC, and after successfully completing two years, they may transfer to one of New Hampshire’s four-year schools, with the courses taken at RVCC credited at the new school.  Taking those basics at a community college can save considerable tuition costs. 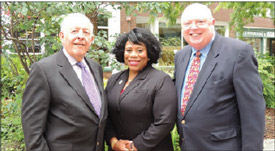 The affordability of classes at RVCC not only applies to New Hampshire students.  RVCC offers in-state tuition to all students living within 50 miles of one of their education centers.  This means many Vermont residents of the Upper Valley can take advantage of the lower cost of education, despite the fact that RVCC is a New Hampshire institution.

O’Connell said RVCC is working closely with area businesses and organizations to develop programs and classes beneficial to both students and employers.  Those institutions, with which the school is developing a working relationship, include Lebanon-based Hypertherm and DHMC.  Having input from the area’s small business community is important as well, said O’Connell.

O’Connell said many employers he speaks with stress the need for students to learn the basics of good work habits.  These so-called “soft skills” include showing up ready to work and working well in teams.

Students at the school come from all walks of life.  “I’ve had students (at RVCC) from 18 to 65,” O’Connell said.  Still, in recent years, the average age of the RVCC students has gone down, bucking the trend found at other institutions.  One reason, he believes, is that students graduating from high school find the community college system a good economical alternative to going directly to a four-year college.

Business classes will not be the only option for students studying at Lebanon.  Many liberal arts courses will be offered at the school as will study in massage therapy.  The school is hoping to offer a fine arts program in Lebanon, too.  As a broad range of study is important to the learning experience, RVCC requires students to take eight liberal arts offerings for graduation.

Teleconferencing is another option for students at RVCC.  This allows a student enrolled in Lebanon to take a course offered in Keene, for instance, without having to physically travel to the Keene campus.

Finding instructors to staff the new Lebanon facility is of the utmost importance, said O’Connell.  “We want to find the right people,” he said.  Fortunately, the Upper Valley area has a strong component of educated, accomplished individuals that can lend their skills to the classroom.

Creating a new academic center does require more than just students and instructors, however.  The buildings need to meet our standards,” said Dr. Harvey-Smith.  Despite the fact that Lebanon College did some renovation work in recent years, particularly to the former Shoetorium building, more needed to be done prior to the RVCC opening.  Interior work, including bathroom renovation to meet Americans with Disabilities requirements, tearing up and installing new carpeting, and upgrades to the lighting and heating systems all are part of the renovation work at the downtown Lebanon facility.  To pay for the work, RVCC, through gifts, grants, and other fund-raising efforts, is raising $1 million for renovations, said Mike O’Connell.  As of now, roughly $650,000 in grants is available to the school through various sources.  The USDA loan, used to purchase the former Lebanon College buildings, does not apply to the renovation work at the site.