The Pig That Travels Around Town 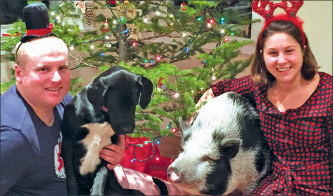 Have you been lucky enough to meet Dudley, the not-so-mini mini-pig? Many in the Upper Valley have. Michelle Carbonneau and Zebulon Jenks of Vershire, Vt., are the proud owners of 3-year-old Dudley Winston Jenks, a miniature pig. Dudley is not a pot-bellied pig but a Juliana pig, also known as the Miniature Painted Pig. Unlike the more commonly known pot-bellied pigs, Juliana pigs are leaner in appearance, generally taller, and they lack the belly of other miniature pigs.

Also, Michelle and Zeb discovered that if fed and cared for properly, miniature pigs can actually grow to be quite sizable. Dudley has maxed out at a very healthy weight of 185 pounds.

All miniature pig breeders recommend lots of socialization from an early age in order to have a friendly adult pig. Since he was a piglet, Michelle and Zeb have made an effort to bring him everywhere they go. He loves to go for car rides and visit new places. Michelle and Zeb cater events on the weekends, often either weddings or for local fraternities, and Dudley usually goes with them. He’s happy to socialize with the people, dogs, kids, and just about any other animal. “We do a lot of catering for weddings. Sometimes the bride and the groom actually request that he comes along,” Michelle said.

Recently, he was the “king” of Wells, ME when Michelle brought him to the beach there. A lot of people had never seen a pet pig before, so they came up to pet him and many found themselves laying down in the sand with Dudley while they rubbed his belly. He was very happy to oblige. Belly rubs are one of Dudley’s absolute favorite things.

Dudley is also an avid hiker! His most recent hike was seven miles long. He’s happiest when he is wandering around in the woods with them, Michelle noted.

In general, Dudley is a pretty mellow pig, although that might have something to do with the fact that he has acres to roam, ponds to swim in, and Grandma and Grandpa’s house to visit next door. He does not do all this roaming alone, though; his absolute best friend is the couple’s 1-year-old boxer/lab mix, Bailey. The two snuggle and play together, and both are allowed loose in the house during the day while Michelle and Zeb are at work. 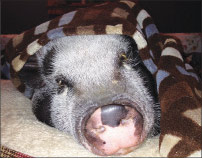 Of course, Dudley would rather snuggle with his owners. He used to sleep in the bed with them, but when he outgrew that he got his own bed at the foot of theirs. When it is bedtime, Dudley will wait by the bedroom door until Michelle comes in, pets him and rubs his belly, and then covers him up, and he will stay like that for the entire night.

The care for a pig like Dudley is much like caring for a dog his size. He visits the vet every year for his shots, eats proper food (including mini-pig food as well as fruits, veggies), and gets the opportunity to graze, and they had to make some changes to their house in order for Dudley to safely get around. He cannot go up and down stairs anymore, so they built ramps all throughout the house so Dudley could travel with ease. They also had to child-proof the entire house to keep the very smart, and sometimes naughty, pig out of trouble. He has a life expectancy of 20 years, so both needed to be prepared for the commitment.

His hooves have to be clipped, but Michelle trained him early to let her do this herself. Now she just rubs his belly until he relaxes and then she clips his hooves with a toenail clipper. One of the most incredible things, however, is that Dudley is trained to go to the bathroom outside. He arrived using pine shavings in a litter box but eventually decided he did not want to do that anymore, and now he waits at the door until someone lets him out.

Michelle grew up in Charlton, MA and while her family always wanted a mini-pig, they never had the opportunity to get one. Zebulon, on the other hand, grew up in Vershire with plenty of knowledge of farm animals. The two met while working together at the Elizabeth Mines Superfund Site in Strafford, Vt., where Michelle was the on-site engineer for a consulting company and Zebulon, the Superintendent for Northwoods Excavating, was working on the site as well.

When Michelle moved up here to be with Zeb, it seemed like the right time, and they decided to get Dudley. She enjoys spending her time roaming around with Dudley and educating people on miniature pigs any chance she can get. “I could not be more happy I got a mini-pig. He is like my world,” Michelle said. “He’s a pig who just wants to be around his mom, dad, and family all the time, and any chance I get to share that, I do.”

« Previous post
A must-experience performance for a great cause…This Wednesday night at the Lebanon Opera House, 7pm.
Next post »
How Does Lebanon Stay Fit?