What the World Needs Now: Kids4Peace

Lebanon resident Kelley Gage (left) and colleagues at the mosque

“We wondered if we’d have to cancel [interfaith] camp,” said Kids4Peace New Hampshire and Vermont regional director, Jeff Mandell. Kids4Peace is a youth movement of more than 1,800 Palestinian, Israeli, and North American members, with a recently formed NH chapter. “But every summer has tension no matter what. Just because you take the kids out of the country doesn’t mean the politics stop.”

The role of Kids4Peace in children’s lives focuses on just that: how to acknowledge the politics, race, religion, history, and gender of a person, without letting those things affect your treatment of him or her. Through peace dialogues and conflict resolution, the organization’s goal is for children to emerge from the six-year program with an understanding of tolerance to bring back to their own communities. 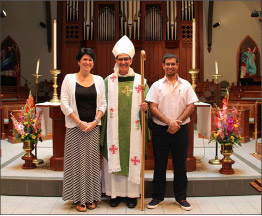 Founded in Jerusalem in 2001, Kids4Peace was created in response to concerns about the future of the area’s children. The program is based on a six-year model with Jewish, Muslim, and Christian children entering the program at age 11 or 12 and continuing through age 18 if they choose. Kids4Peace includes chapters in Jerusalem, Canada, and United States.

The camps are the focal point of the program for many children – with two weeks each summer dedicated to learning about other faiths, developing relationships outside one’s normal circle, resolving conflicts, learning to listen and share peacefully, and of course all the beloved camp mainstays: swimming, crafts, yoga, sports, songs, and campfires. The New England regional camp, which runs August 12-23 at the Barbara Harris Camp and Conference Center in Greenfield, NH, includes children from both New Hampshire and Vermont chapters.

Lebanon resident, Kelley Gage, who is a classroom clinician in The Wilder School’s middle school classroom, and who worked previously at Hanover Street School, is a Christian faith advisor for the local K4P summer camp. Last summer was her first year at the camp, and she was apprehensive about what she could offer this diverse group of children.

“I’m not a political person, and my knowledge of geography is pretty bad, and here’s this program that brought kids from three different religions,” Gage said. “I knew nothing about the Muslim faith and Islam, and very little about the Jewish faith. I was raised Catholic and will be the first to tell you I should’ve been paying more attention in Sunday School. But I know kids and I know teenagers.”

Dick Dutton, who was one of the founders of the NH chapter of K4P, recruited Gage to be a camp advisor, reassuring her that “kids are kids no matter where they come from,” Gage said.

Dutton, the former pastor at the First Baptist Church in New London, NH, became interested in starting a local K4P program after successfully running a similar camp for children from Ireland. He, along with a Catholic priest from New Hampshire, brought 13 kids from Belfast to the U.S. for a 10-day camp with 13 American children to teach religious tolerance. “That was a very healthy experiment,” Dutton said of the camp, which ran for five years.

When Dutton retired from the church, he thought it would be exciting to form a program for Christian and Muslim children, and soon found out about Kids4Peace from Rabbi Robin Nafshi at Temple Beth Jacob in Concord, NH. 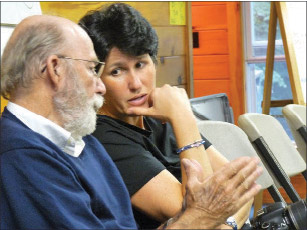 Two years ago, Dutton and Nafshi co-founded the New Hampshire chapter of Kids4Peace, raising the necessary funds from grants, individual donations, churches, mosques, and synagogues. The money raised – about $45,000 – covered the travel expenses of bringing children and staff to the U.S. from Jerusalem, which includes a male-female balance of six Jewish children, six Christians, six Muslims, and several counselors and faith advisors from each religion. The group is matched with an equal number of children and staff from VT and NH chapters. In addition to camp, the children of the program are committed to 3-4 community programs throughout the year, such as working with Habitat for Humanity or assisting people in poverty, Dutton said.

The focus of the New Hampshire camp is conflict resolution, learning to respect another’s background, and working through issues that might separate one another, said Dutton.

“[The children] are able to talk and feel and bring themselves to a place where they’re not only accepting of each other, but celebrating each other’s faiths and cultures,” Dutton explained.

During camp, the children visit each other’s places of worship, – a mosque, a synagogue, and a church – which can be a rather moving experience, according to Gage. She recalled being with the children in St. Paul’s Episcopal Church in Concord, NH. 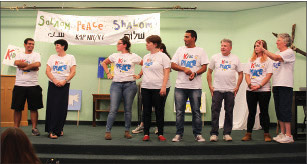 “To be in that church, standing beside Muslims and Jews…,” Gage said, her voice trailing off in remembrance. “The kids all went up as a group to sing a song, and to see them in front of the altar singing to the congregation… a lot of people were crying; it was very powerful.”

The singing was followed by a question-and-answer period translated into both Arabic and Hebrew, where, Gage said, the work of the previous week – learning to dialogue peacefully, breaking down stereotypes, questioning and listening – came to life.

As a faith advisor, Gage’s role is to head peace dialogue groups, help campers maintain their journals, answer questions, and check in on a day-to-day basis on their feelings and basic needs. Trained camp counselors are there to offer similar support but on a more intimate level as they spend most of each day right there with the children. Gage was quick to admit the campers are not the only ones learning during the two-week program.

“I always thought I was a tolerant person; you think you’re a kind, forgiving person,” she said, “but I’d never been tested on tolerance. In New Hampshire, I’ve never really been tested on my beliefs. Kids from Jerusalem live a whole different life than we do.”

Gage explained that before camp began last year, staff watched a TED Talk on tolerance. “I realized I was not the person I thought I was,” she said. “Until you have to flex that muscle, you don’t really know.”

A poignant moment for Gage was when she sat with a young camper in the hospital. The girl, Khadija, was receiving care for an injured wrist. From Palestine, Khadija told Gage about how, just the month before, her brother could not go to work because the burned body of the 16-year-old Muslim killed by the Israelis was found near his place of employment.

“Her family was so close to this chaos and this war, and to hear her talk about that – this little 12-year-old girl with curly hair and a little splint – talking about finding a burned body.” 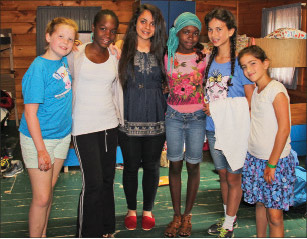 Dutton said part of the excitement for campers – as at any other camp – is simply that kids are getting to meet other kids. “They make friends, they fall in love, they get to see something different,” he said.

But at Kids4Peace camps, Dutton said he hears children say, “I’ve never known” or “I want to know more about that person’s experience.”

“There is a sense of community. We’re overcoming stereotypes and misconceptions – there are lots of those,” Dutton explained.

Moving from camp to the world beyond can be daunting, but Kids4Peace works on building the bridge between the two.

“Part of the exercises they do each morning includes addressing resistance,” Dutton said. “How do you overcome that? You don’t just say ‘you’re wrong.’ You build relationships and out of that comes trust. From there they can share what they know.”

Mandell, who attends the camp as regional director, said the tension that exists along religious lines tends to manifest in different activities, for example, soccer.

“They may get into an argument that’s not really about soccer,” Mandell said. “So what we do in those situations is teach conflict resolution skills used on the playing field that they can take home and use when they’re learning to talk about bigger issues.”

Camp, Mandell added, is “not all roses, but it is in some ways a haven in the sense that we provide a great, safe environment.”

Beyond what the campers experience, Mandell said he has noticed profound moments happening among the staff, who are a mix of Muslim, Christian, and Jewish.

“Observing the support that they give each other is revealing of the challenging work of being a peace worker in such a violent and tense time and place,” Mandell explained. “Joining Kids4Peace can often mean being excommunicated from your own community. Kids4Peace has created a new community where non-violence and hope can be fostered.”

The children benefit from this “new community” as well, he said.

“Everything can be going well during the camp, but as soon as they return to Jerusalem, they face the same weighing culture from before. Their [Kids4Peace] community provides a place to share and be accepted…”

For more information, go to www.k4p.org.

« Previous post
Who Says Lebanon is the Best Small Town in the U.S.?
Next post »
Lebanon Students Explore Careers