May 26, 2016by AdminLTNo CommentsAll, Green Page 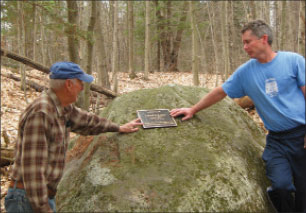 Who knew? A forested gem just a few steps away from some of Lebanon’s busiest streets, lush in spring with vernal pools and wildflowers, lies tucked between I-89, Alice Peck Day, and Young Street. Starr Hill has been known to some for a long time, though its healing beauty is always available for appreciation by new visitors.

Starr Hill’s survival as conserved land is a story of persistence by Laurel Letter and her husband, Sid. Longtime residents of the Young Street neighborhood, they knew and appreciated both the value of the hill’s peace and charm, and the fragility of its position so close to the growing city. Though parts of the land were probably safe from development, being very cliffy, the more level spots might be in danger. Public ownership would remove all doubt. So, shortly after the Upper Valley Land Trust (UVLT) was founded in 1985, Laurel began pointing out the value of Starr Hill, and urging the Land Trust to protect it.

UVLT always has more options of places to conserve than it has dollars, and this was especially true in those early years, before the group earned the respected place it now holds as a force for land preservation in the Upper Valley. With endless though always cheerful effort, Laurel pursued her project with the gentle but relentless dedication of a border collie. Her work went beyond just the Starr Hill land. In pre-GIS days there were no maps of what the City owned, which led her to research and map by hand a catalog of all City-owned properties of conservation interest. The “Laurel Letter map” was for years the planners’ reference about conservation land. 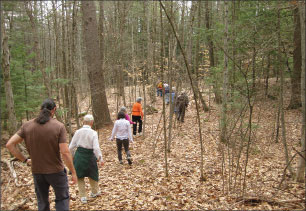 The Starr Hill parcel came up for sale and a developer made plans (which fell through) for condominiums. This narrow escape was a constant spur for Laurel, who practically moved into the UVLT office, then on Colburn Park. In 1991 her efforts finally paid off: UVLT agreed to conserve the land, and the Lebanon Conservation Commission put up some money.

But more money was needed, and it was at this point that Sid and Laurel made one of the most unusual gestures ever in support of conservation: They took out a second mortgage on their house, as much as the bank would allow, to match the Commission’s donation, closing the gap in funding.

“It was scary,” admits Sid Letter, recalling this financial commitment. “But Laurel had been a very, very careful manager of our resources for so many years, I figured if she wanted to do it, it was okay. I had immense confidence in her, based on years of experience.”

Laurel died in March, 2014. The UVLT has organized walks on Starr Hill trails on Earth Day as a memorial to Laurel and her indomitable efforts, and they hope to make the walk an annual event. Sid joined in this spring’s walk, and was pleased to notice fewer signs of “hell-raising”—bottles and other trash scattered about.

“There was nothing in evidence,” he says. “The place looked significantly better than it used to.” If he felt pride as he once again admired the rugged boulders, gentle trails, sturdy trees, and delicate wildflowers, he’s certainly earned it.

There is trail access parking for several cars at the end of Wheatley St., one block west of Young St., which runs parallel to Hanover St. Please do not block or park on private property.