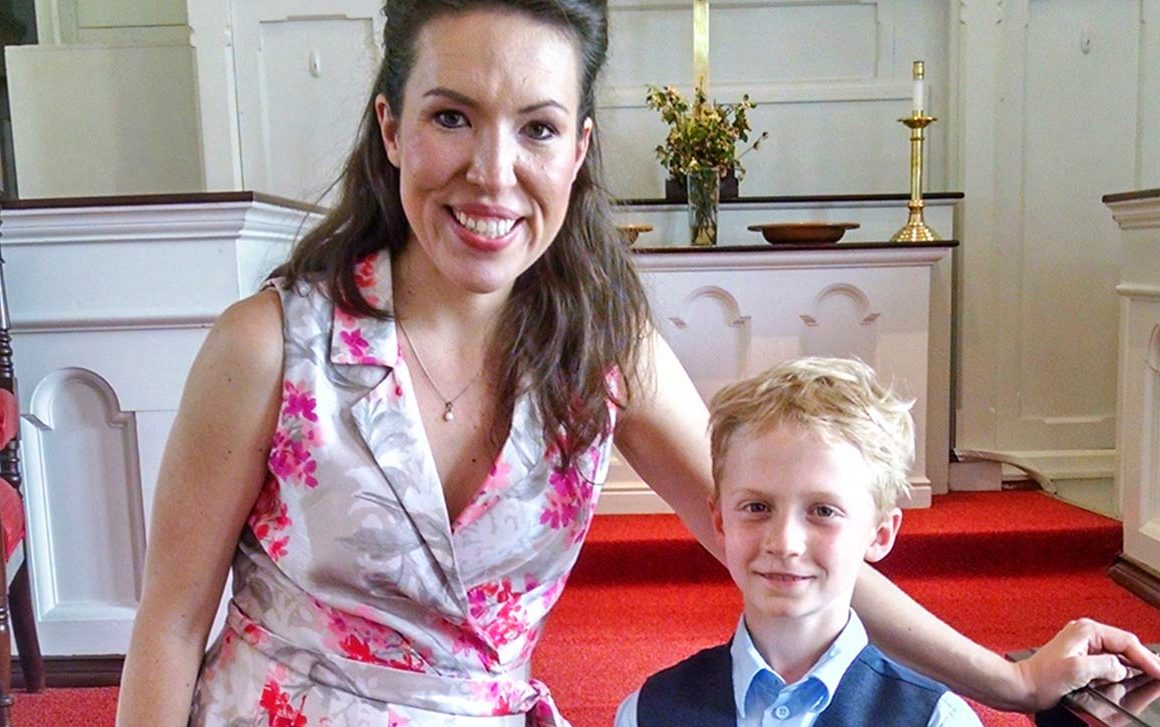 Among Elizabeth Borowsky’s two-dozen-plus Upper Valley students, Amalia Hickey doubts that she’ll ever play the instrument for audiences of more than a few friends.

Yet Hickey keeps going back to the keyboard, which grips her imagination the way wielding a field hockey stick lights up her instinct to compete for Lebanon High School.

“I love the grand sound,” says Hickey, a junior. “And I love that all 10 of your fingers are playing together and working together to create music.”

Her love for the piano multiplied a couple of years ago when Borowsky started composing, as annual birthday presents, solo pieces on which Hickey could hone her skills. As she does with all her students, Borowsky tailored these to Hickey’s taste, personality and skill.

“I was never drawn towards classical music and Elizabeth found that out after I had tried to play a couple of pieces but didn’t have the motivation to finish them,” Hickey recalls. “Every birthday piece she has written for me sounds like it could have words to it, or it could be danced to. I have so much fun playing her pieces that it keeps me motivated to keep learning.

“She is the reason I did not quit the piano.” Such reactions from Borowsky’s younger students – ranging in age from 7 to 16 – to their birthday solos are as much music to her ears as is the applause of live audiences, which the coronavirus pandemic continues to deny her.

“I’m giving them that vote of confidence, that I have faith that they are willing to try,” says Borowsky, who moved to Lebanon from Baltimore in 2015. “The results … far exceeded what I could have anticipated.”

By early 2020, Borowsky had written almost 80 solos for students of her Piano Prodigies studio [www.pianoprodigies.com], and was toying with the idea of recording and packaging 100 of them – if and when time ever allowed.

Enter COVID-19. With her Upper Valley dates as well as her worldwide touring schedule on hold until further notice, Borowsky treated the opening as “the golden opportunity to move it forward.” The ramping-up of her “100 Solos for Piano Prodigies” project coincided with the move of her studio to a converted space in a former industrial complex on the Mascoma River, from the Lebanon house out of which she was moving.

Today, two skylights in the high ceiling and a bank of northwest-facing windows gently illuminate the new space, walls and ceilings painted in white. Surrounding Borowsky’s Steinway grand and an upright piano – on which she expects soon to start teaching again in person – are a battery of audio and visual equipment that allows her to conduct lessons remotely as well as to record her students’ solos and to choreograph video recitals.

“I am filled with joy every time I come into this space,” Borowsky says during an interview there in mid-April. “Everything you see here has been touched, from ceiling to floor. The acoustics took the longest to figure out.”

From her wide and deep network of musicians, Borowsky consulted two sound technicians who advised her, among other adjustments, to cushion the floor with carpeting and the windows with ten-foot-tall velvet curtains, which she said “got the balance of the acoustics just right. “It was, ‘Yeah: Control!’”

Over the summer and fall of 2020, Borowsky raised money, through a GoFundMe page, to not only record the solo compositions but to devise and develop the artwork for the packaging of the recording. Support came, and continues to come, from many sources, including the families of her students – some of it in unexpected forms: her youngest student, 7-year-old Arjun Gupta of Hanover, has told Borowsky that “he intends to learn all 100 pieces, and he’s working hard to make that happen.”

The project began with Poseidon’s Palace, a solo recording that Borowsky composed for the ninth birthday of Gavin Nartowicz, one of Borowsky’s first Upper Valley students. “They are musical gummy vitamins,” she says of the solos. “They’re fun to listen to and play, but chock-full of artistic and technical nutrients.”

In a recent email, Gavin’s mother wrote, “We’re very excited for you and this (100 Solos) endeavor! Gavin’s last birthday piece (from 2020) is still his favorite piece to play.” Borowsky calls the project “a perfect combination of my experiences of and passions in life” as a performer and a teacher.

One of three children of world-touring cellist Cecylia Barczyk, Borowsky took up piano at age 4, while her brother Emmanuel gravitated to the violin and their sister Frances the cello.

At 7, Borowsky began playing recitals in Baltimore, and by 9, she was touring eastern and central Europe.

With her siblings, she played and occasionally still performs concerts as the American Virtuosi, and collectively and individually, they often collaborate with their mother.

Between tours as a soloist and an accompanist and composing her own works for recording, Borowsky built a following of private students in Baltimore. Teaching, she recalls learning, is about balancing “critique with humor.”

“I’m not their Mom,” she asserts. “I’m not their aunt. I’m just their coach, their teacher… The key is just to listen, and then to adjust.”

Between her long days in the studio and her walks with her dog Max, Borowsky isn’t letting grass grow under her feet while waiting for concert halls near and far to reopen.

In addition to composing five pieces that the New Hampshire Music Teachers Association commissioned last summer, and organizing a virtual concert and documentary celebrating her mother’s retirement after 38 years of teaching at Towson University in Maryland, Borowsky spent part of the winter composing a 3½-minute movement that teen students of the Lebanon Ballet School performed during City Center Ballet’s Spring Showcase, “Moving Forward,” on May 21, 22 and 24.

“I ran into her in the yogurt aisle at the Miracle Mile Price Chopper, and asked her what she might have for music we could use,” recalls ballet school alumna Kassady Small, one of the choreographers for the showcase. “I was looking for something easy for the girls to dance to, that had the emotion I wanted. “It’s so nice to find someone right here in town who understands the artistic process.”

While Small’s students have danced to a recording of And Still We Dance, which Borowsky describes as “an homage to Piazzola,” on a live Facebook stream (visit citycenterballet.org to learn more), Borowsky hopes someday to collaborate in person with its choreographers and dancers. So far in the pandemic, the nearest she’s come to performing live was this past February’s Piano Day at the Omaha (Neb.) Conservatory of Music, where she led a socially-distanced master class and workshops, played a recital and even conducted a yoga class.

While preparing for the outing tested her multi-tasking skills, she says, “it forced me to really think about what I’m doing, and for whom I’m doing it.”

It also led to her solos reaching piano prodigies beyond the Upper Valley: Recently a teacher she met in Nebraska texted her with the news that two students performed pieces from “100 Solos” at an Omaha recital. “The gal (who) played Adventure of the Planets had been in a bit of a slump with practicing before we started working on it,” the teacher wrote, “but she is so inspired after connecting with that piece!”

Speaking of music to your ears… “It’s so rewarding to see that it stands on its own,” Borowsky says of the ‘100 Solos’ project, “that it is valuable to others.”