February 23, 2021by Nicola SmithNo CommentsAll, Good For You 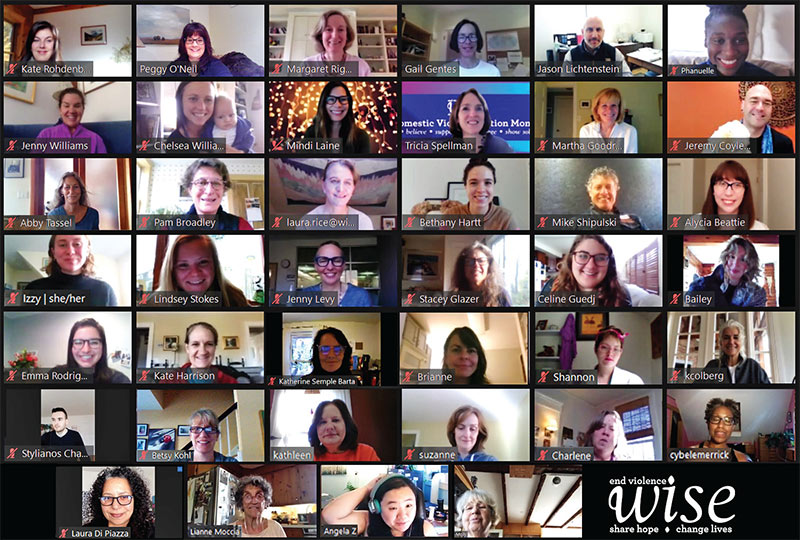 When Peggy O’Neil became the executive director of WISE (Women’s Information Service) in 2003, the Lebanon, N.H., non-profit organization known for its work in assisting survivors of domestic abuse and sexual violence, the organization was using a decades-old logo that showed a woman in silhouette, her face hidden from view. The image was consistent with society-wide attitudes toward the twin scourges of domestic and sexual violence – kept out of public view, and rarely spoken of.

“We know that secrecy and isolation breed domestic violence and sexual assault,” O’Neil said in a Zoom interview.

But shrouding these issues in secrecy and isolation is not the best way to combat a global public health problem. The World Health Organization (WHO) estimates that about 1 in 3 women, or 35% of women worldwide, have experienced “either physical and/or sexual intimate partner violence or non-partner sexual violence in their lifetime.”

So, in 2006, after consultation with the staff and the Upper Valley community, a new WISE logo and message were unveiled. No woman concealed in the shadows this time, but a simple declaration: end violence, share hope, change lives.

“It was more consistent with our intention to end domestic and sexual violence within our communities, including being more public about the issue,” said O’Neil.

This year marks WISE’s 50th anniversary. What began in Hanover as a career resource center for women has become a multi-faceted agency that provides services to survivors of domestic and sexual violence from 21 towns in New Hampshire and Vermont. Approximately 1,300 people annually turn to WISE for counseling and assistance. WISE offers safe housing for women leaving dangerous, abusive relationships, often accompanied by their children.

“Survivors don’t necessarily feel safe or comfortable in shelters or transitional housing. When you leave your home, you have to go someplace – and that place needs to be safe,” said Betsy Kohl, WISE’s communications and development director.

The WISE mandate is a broad one. WISE now owns three buildings in Lebanon: their offices at 38 Bank Street, a safe house (location undisclosed) and, most recently, they acquired an apartment building next to 38 Bank Street, which they are renovating for long-term housing.

WISE also provides financial and housing assistance, and support for people navigating the often intimidating, complex maze of law enforcement and the courts.

Since the early 1990s, WISE has brought educational programming into schools in the Upper Valley. With the hiring of a program director in 2008, WISE now serves four independent schools and nine public school districts in New Hampshire and Vermont, including Lebanon, Hanover, Thetford, Mascoma Valley and Windsor. The programs begin in elementary school and continue through high school.

The idea is to help younger people recognize the warning signs of not only physical abuse, but also, in this era of social media, the signs of bullying, stalking and coercive control.

“The prevention work they do is really unique. They’re trying to change the dynamics in young people,” said Tricia Spellman, a member of the WISE Board of Trustees since 2015, and Chief Financial and Administrative Officer at the Thayer School of Engineering at Dartmouth College.

WISE’s expansion has continued in other areas. In 1982, WISE had 22 volunteers; today, it has 106 trained female and male volunteers who work the 24-hour phone lines or correspond online or by text, and act as court observers and ambassadors to the community at large, said Kohl. When O’Neil took over the directorship, she estimates that WISE saw about 600 people a year; that number has more than doubled.