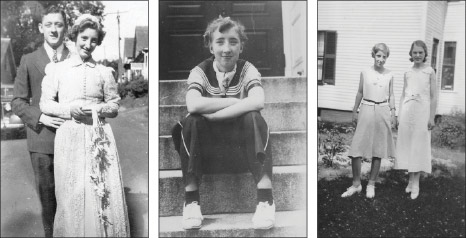 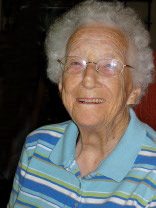 Getting around Lebanon was a different process 80 years ago. “We walked everywhere,” says Regis Jette, smiling alertly as she tells stories from her life. Her sunny personality shines through the tales she tells. Though her life had difficulties, she recalls things with a smile. She brings the word ‘chipper’ to mind.

Regis Heath was born in 1920. Her unusual name came from a friend of her mother. Her family, which came to include two younger brothers, lived in Canaan. Her father delivered ice with a horse-drawn wagon. He eventually moved to Lebanon for work, and drove a milk truck to Boston, then the local bus that carried people from town to town.

“We always had a trip” at Canaan school’s eighth grade graduation, recalls Regis, “and of course we walked because no one had a car. We went up Mt. Cardigan,” about five miles one-way from town. By then, of course, it was the depths of the Depression, though Regis does not speak of particular problems. “We were generally careful about money,” she remarks. “We always had a big garden, and what I remember from that is picking potato beetles. My dad grew a big potato patch, and us kids had to pick potato beetles,” she repeats with feeling, but still with a twinkle in her eye.

What scarred her more than the Depression was the death of her mother from a sudden illness when Regis was nine. “Even at the early age of nine, she was helping to run the house,” says her daughter Anne. Relatives offered homes to Regis and her brothers, Earl, known as “Boze,” about six, and John, then about three. But their father was firm about keeping his family together, and family rallied round in other ways, hosting kids during summer break, and helping at home.

For graduation from Canaan, Regis received a present from one of her aunts: a train ticket from Canaan to Lebanon (her father’s new location) on the Boston and Maine Railroad, so that she could finish 8th grade and graduate with her Canaan friends. She’d never been on a train before, but the young teenager boldly set off on this new adventure. Ghostly traces of the B&M’s presence can be seen in the Rail Trail, but in Regis’s day, trains were real and utilitarian.

In 1938 Regis married Adrian Jette, whom she knew from Lebanon High School, then on Bank Street. The couple had four children: Earl (known by his middle name as Bob, since there were several other relatives named Earl), Marguerite (Peggy), Anne, and Jim. The family lived on West Street, then on Hanover Street, where they were living in 1964 when the most recent great fire destroyed much of the city’s downtown. “Cinders from downtown were flying on our lawn,” says Anne. Adrian was a fireman, and he came down Mt. Support road, back from work in Hanover, telling the person driving to take him right to the fire station. Regis was in the auxiliary. “While the fire was going on, all the women were in the kitchen,” she says. “I remember walking towards Enfield with a big jug of lemonade.” Bob drove around with his uncle Earl. “The firemen had the perimeter under control,” he recalls, “but it was too intense to put out.”

Regis got an administrative job at Hitchcock Hospital, then on Maynard Street in Hanover. She worked for different doctors, doing what was needed, including checking in patients. She had excellent organizational skills. “I was always glad I did that,” she says, and so were her colleagues, who would say, “Ask Regis where the doctor put that.” She worked at the Hitch for 26 years, often going in early to meet up with coworker friends for a cup of coffee. At lunchtime she would usually walk uptown – that habit of walking was strong! She would do errands for coworkers on these trips. She also gave her organizational talents and sociability to many civic groups – the Cub Scouts, the Hartford Elks Auxiliary, the Catholic Daughters of America, and city elections, to mention a few.

One of the great sorrows of Regis’s life was the loss of her brother John in World War II. He had joined the Navy, and was reported missing in action. When, years later, she traveled to Hawaii, she found his name on the memorial wall. “I think it gave her a kind of closure,” says Anne.

After retirement from the Hitchcock, Regis began volunteering at the Lebanon Senior Center, originally at the Carter Community Building, though the stairs were a problem for some. She wanted to continue an active social life, and help the community. She realized gathering for meals would be an ideal format. She participated in numerous activities, encouraged others, and was Team Captain at Monday meals for 25 years. She continued to run and encourage the Senior Center for many years. One memorable occasion was a dress-up fashion show with unusual items loaned to the Center. Regis modeled a black feathered wrap with great style and enthusiasm.

In later life Regis was also able to pursue an interest in travel, beginning with a trip to celebrate her fortieth wedding anniversary. “I love San Francisco,” she says. “I wouldn’t mind living there! —going up and down those hills. My husband was in front of me and I held on to his belt” as they rode the streetcars. She’s been to Las Vegas, Cape Cod, Maine, the Blue Ridge, Quebec, and Florida, among other places. “You know,” she says, with her smile spreading, “I’m trying to think of places to go while I’m still healthy.”.

« Previous post
Lebanon Friends Step Up For Winter Fun
Next post »
Who Says Lebanon is the Best Small Town in the U.S.?