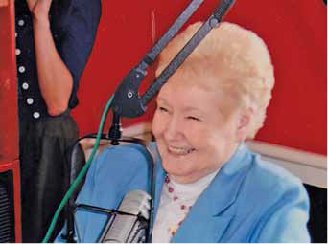 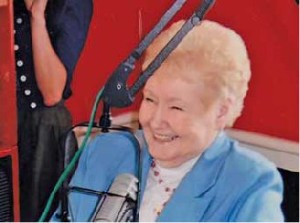 Terri Dudley was recruited to start an interview show on WTSL radio.

Terri Dudley greets a visitor with a hug instead of a handshake. A welcoming, grandmotherly woman (who is indeed grandmother of four and great-grandmother of five), she leads the way to a cozy living room filled with seasonal decorations. You’d never guess that she’s spent years in the civic and political heart of Lebanon. The titles of the positions and achievements on her résumé flood off the page.

But if you ask Terri what has been her greatest accomplishment, she instantly says, “Raising children.”

She didn’t limit her attention to her own three, or her five foster children. “Our home was the gathering place for all the children in the neighborhood,” she recalls. Her home at the time was the building that now houses Planned Parenthood in West Lebanon, but Terri and her husband, Roger, now live within sight of Mt. Lebanon School. “It’s so much fun to watch the children,” she says. “I’ve always been involved, one way or another, with kids.”

Raising the next generation is only the tip of Terri’s iceberg. After all, it’s not everyone who has a major city bridge dedicated to them (check the sign as you drive over the Mascoma River between the Miracle Mile and Glen Road).

“I was surprised and humbled when they told me,” says Terri, “because this is my hometown. I was born here, on Slayton Hill.” She laughs and adds, “My son-in-law said the only other person he knew who had a bridge named after him was George Washington, and I said, ‘But you don’t know him!’”

For twenty years, from its inception in 1974, Terri chaired the court diversion program in Lebanon, devising personalized community service programs to turn around young offenders.

“It’s a very effective program,” she says emphatically. “When a child comes before the committee, they have to come with their parents, and admit their guilt. One time two kids, 10 and 11, had turned over stones in the cemetery. I said, ‘How would you feel if someone did that to your grandmother’s grave?’ and they understood that. They worked with the Lebanon cemetery department to reset the stones.”

“She has a very warm place in her heart for teenagers, for young people,” says Nancy Merrill, who’s known Terri for decades. “You’d never hear her say a bad thing about a young person, even when they messed up. She always sees the best in them.”

United Way, LISTEN, Lebanon College, and the Upper Valley Credit Union have all benefited from Terri’s efforts on their boards, as has Alice Peck Day Memorial Hospital, which named her Trustee Emeritus in 2011, one of only two people ever so designated. In this role she can participate in meetings but not vote. Clearly the trustees want to keep hearing her ideas. 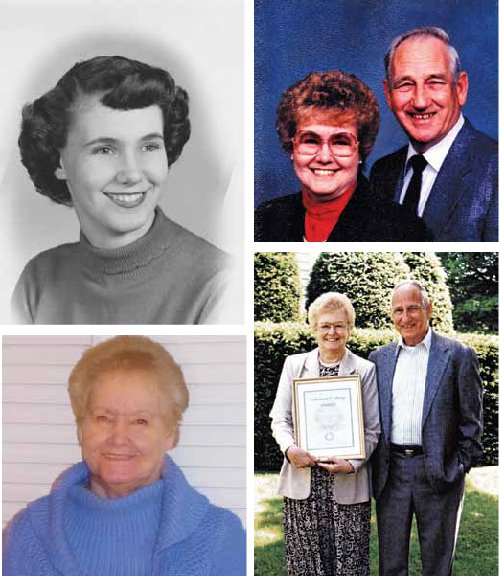 In addition to her work with various community organizations, Terri has been involved in city and state politics. She served on the Lebanon City Council for 15 years, and was Assistant Mayor from 1992 to 1996, and then Mayor for two years. Elected to the New Hampshire House of Representatives in 1998, she served for eight years, and was a member of the Judiciary Committee, gatekeeper for proposed bills. It was strenuous but fascinating work, with buckets of serious legal reading.

“Lawyers, judges, and residents from all over New Hampshire would come before us and talk about why a bill should or should not pass, and we’d listen,” Terri recalls. After three years she became Clerk of the committee and sat at the head of the table with the chairman and co-chairman during meetings. She was there for the impeachment of Judge David Brock, the first judge impeached in New Hampshire since 1790.

Terri “is absolutely committed to the City of Lebanon,” says Nancy Merrill, who first met Terri when they served on the City Council together. Terri notes of today’s Council, “In the last three elections, there were no challengers. It bothers me: With the number of people in Lebanon, there ought to be folks interested in helping run things. It’s not that I have any complaint about the current council, but it’s good to have a contest.”

Terri worked for the Valley News for 37 years, as a reporter and columnist, and in advertising. She was the Advertising Director when she retired. Then she was recruited to start an interview show on WTSL radio. “The owner called me three or four times a week,” she remembers. “Finally I said I’d try it for a month, and I enjoyed it so much that I hosted the show for 15 years.”

Terri rarely had difficulty eliciting information. “Most people enjoy talking about themselves,” she points out. “The only one I can remember in all that time is Lou Bressett, of Lou’s Restaurant in Hanover. He was a decorated Marine and honorary mayor of Hanover. I had him sitting there – this is live – and I welcomed him and said, ‘Let’s talk about you. When did you enlist?’ and he told me the date. I asked ‘Was it difficult to leave your home, your family?’ and he said ‘Yes.’ This went on till we broke for a commercial, and I said, ‘Lou, you have to talk to me!’ and he said, ‘I am talking.’”

Terri was born in 1929. The ensuing years were a hard time to grow up. More recently, health problems have surfaced in her family, but she maintains a cheerful outlook, though anyone would forgive her for complaining. In 2011 her beloved Roger fell in an accident involving tree removal and broke his neck. Though he has largely recovered physically, the spinal damage left him with poor memory for recent events, says Terri ruefully, “but he goes out and shovels and does all the things he’s not supposed to do.” She has become much more housebound as a caretaker.“

I took my vows, 67 years ago in March, ‘in sickness and in health,’” Terri says. “I have a wonderful husband, and I’ve felt my marriage has been a blessing. We have three wonderful children, Sharron Smardon, Mike Dudley, and Jo Ann Langone. And I’m fortunate to have so many loyal friends.” With evident sincerity she adds, “Life’s been good to me.”