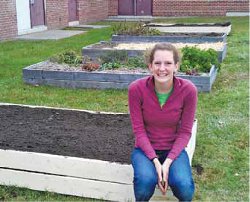 Jacqueline Clary, an art teacher at Lebanon High School, has an infectious passion for what she does. When I entered the large, open art room where she spends most of her time, she was pacing between students still working on their pieces, giving pointers and encouragement when she could.

Her passion carries over into her role as the faculty advisor for Students for a Sustainable Future, the long-running environmental group at LHS founded more than a decade ago by a small group of dedicated students.

The club was originally started with Mary Maxfield and Chrissy Morley, two LHS science teachers, as advisors. Ms. Clary was an eager volunteer at the time. After Mrs. Morley left to spend time with her new children last year, Ms. Maxfield turned the advisor role to the eager, if scientifically inexperienced, hands of Ms. Clary.

“It was hard to accomplish the same [work] without them,” Ms. Clary said.

In reality, SSF is doing more work at the school than ever before. The group’s main initiative is the school garden, built in April 2012. Fresh, organic vegetables grow in five raised beds, including carrots, beets, kale, and spinach. Last year, the group also increased the amount of herbs grown in the garden, including parsley, oregano, and thyme.

“We had a lot of trouble with the electric drill, but once we got the hang of it we built the beds in no time,” she said. “It was just the two of us, but Ms. Clary made it a lot more fun and rewarding.”

During the growing season, students in SSF go outside to the gardens located behind the high school every Monday and harvest that week’s crop.

“They have the most fun with the root vegetables,” Ms. Clary said. “They’re easy to grow and fun to see pulled up. We’re going to try to grow more of those this year.”

Houde has enjoyed making gardening a regular part of her day, saying that “it’s so great to be able to garden during and right after school.”

The garden is integrated into the biology classes to give students a first-hand look at processes like soil testing and germination. It also provides food directly into the school’s cafeteria. Carrots that a student eats at LHS are grown on site and seasoned with herbs grown just a few feet away.

“You can imagine the kind of environmental effect that has,” Ms. Clary said. “Those vegetables are not being trucked in from California, and they’re organic, too.” 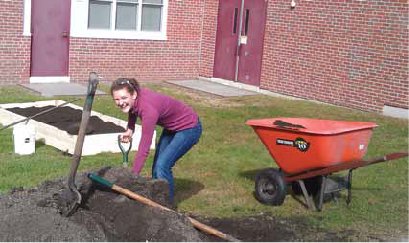 By integrating on-site vegetables into the school’s diet, SSF can ensure that students have access to healthy food from a source with the lowest environmental impact possible.

Not only does SSF help determine what students eat, they help manage how that food waste is disposed of once students are finished eating. A composting initiative spearheaded by Ms. Clary and SSF benefits both the high school and elementary school, and has had an impact on reducing the amount of solid waste the schools send to the landfill.

Composted food scraps go from a portable composting station (designed by the school’s Applied Engineering class) to a farm in Vermont to be composted. Ms. Clary estimates that in one week, the school composts about 128 gallons of food, avoiding methane emissions associated with landfilling organic wastes.

“That’s 128 gallons of waste that would have sat in a landfill before!” she exclaimed, clearly proud.

Over the past three years, students at both schools have embraced the program. “If I’m standing at the composting station, 98 percent of the kids will compost their waste. If I’m not there, maybe 75 percent will. Most kids are very conscientious,” Ms. Clary said.

She hopes to restart a similar initiative at the middle school, where a composting program has not yet become sustainable. But she’s limited by the amount of time she spends teaching and volunteering at the high school. “If you could have environmental advisors be a real position with a stipend, you could really get things started,” she said.

While Ms. Clary contributes many extra hours to SSF, she’s careful to integrate students into every level of the process. “My goal is to expose kids [to helping the environment] and instill habits for when they go forward in life.” 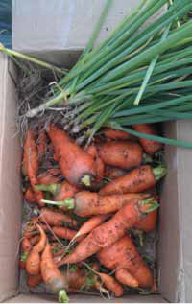 Students do all of the recycling for every room in the school. They stand at the composting station at the end of their lunches and carefully sort between compostable material and the trash. Students also serve at a municipal level, taking spots on Lebanon’s Energy Council to offer new strategies to change the city’s environmental impact. Ms. Clary has even encouraged students to help with Lebanon’s streetlight audit, marking down streetlight numbers to shut off when the city wanted to reduce its power consumption.

Talking to the students, it’s clear that SSF has opened their eyes to their own environmental impact. “It’s scary seeing how much food we collect every day,” senior Rebecca Holdowsky of Grantham said. “Our food isn’t being distributed well…. We need to realize that humans are not the only species.”

Nell Houde has been inspired by Ms. Clary herself. “She puts in a lot of time and letter writing, but she cares enough to stand in the lunch room during her planning period and pick food out of the garbage to put it in the compost. It’s really remarkable. It makes me want to be that selfless.”

Ms. Clary hopes that she can give even more students the same perspective about helping the environment. “They should consider: What would happen if everybody was doing it?”