From Ukraine to the Upper Valley: 83 Days for a Life to Change 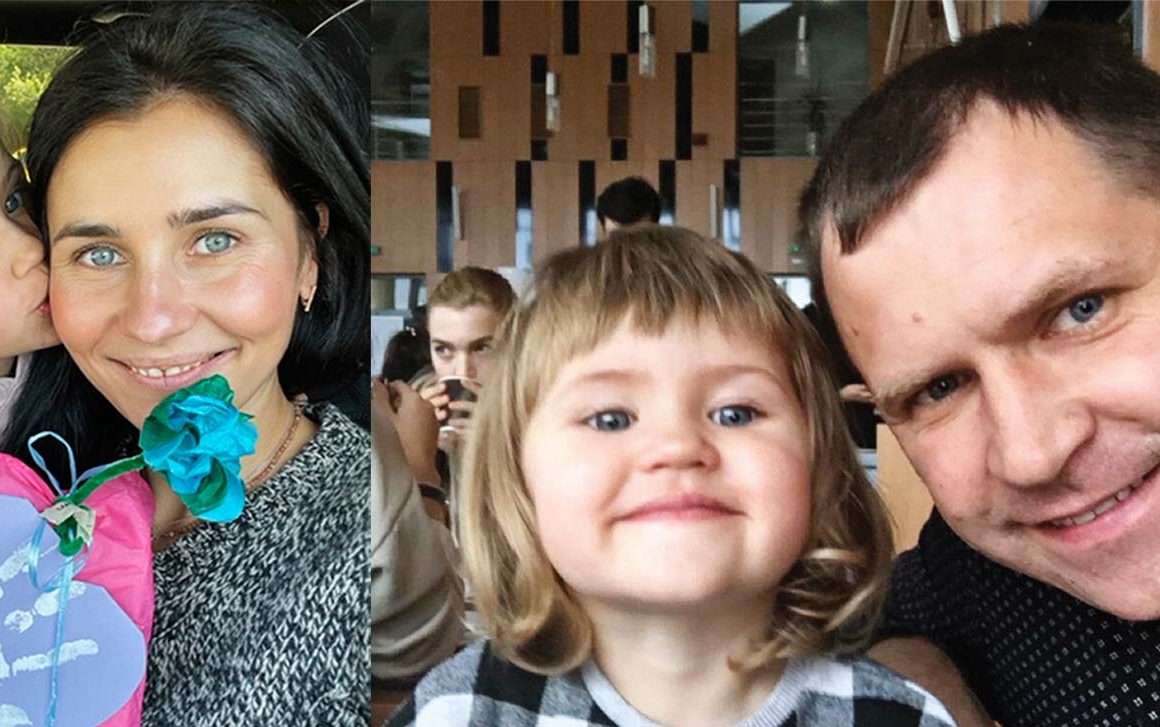 Iryna’s story begins ten years back, before Russia’s war on Ukraine ever began. Iryna Petrus – now living in the Upper Valley with her 4-year-old daughter Polina after fleeing Ukraine in February 2022 – first came to Lebanon as a student. Iryna had a degree in engineering from a university in Ukraine, but was looking to improve her English by studying at Lebanon College where she earned her Associate Degree in business administration. She also worked at Elixir in WRJ, where she recalls talking to patrons about Ukrainian independence and history: “I was a really proud Ukrainian back then and even more now.”

Upon completion of her degree, Iryna moved back to Ukraine and put her degrees to use as the head of HR for the Ukraine branch of the IT company Cyprus, based out of Silicon Valley. Through her work there, she completed her master’s degree in HR at Ukraine Catholic University in Lviv and became a corporate coach. In the past year, Iryna started her own business and won a couple of international pageants in the US and Ukraine to boot. “I really had a very good employment history, career growth, and a very successful life professionally,” Iryna says.

Not only had Iryna forged a successful professional life, she had built a life with her family. Her daughter, Polina, was going to kindergarten and enjoying gymnastics and sports. She and her husband, a partner in a small electrical engineering company, had just purchased a new home a week before the war began. “It was simple but we had a good life in Ukraine. We really had our life at home in our homeland surrounded by relatives,” Iryna says.

All of that changed on February 24th, 2022 when Russia attacked Ukraine.

Immediately, Iryna and her husband decided she and their daughter would leave the country and he would stay behind. “I escaped Ukraine on the second day of the war,” Iryna says, “We heard how our Lviv airport was bombed and we heard alarms and everything and it was very stressful for us.” It was especially hard for her daughter: “It was very difficult to help my daughter understand what was going on. She was really shocked.” It was the difficulty of having a little one in a country at war that prompted Iryna and her husband to decide she should escape.

Lviv is only about 50 miles from the Polish border. On a normal day, Iryna says, it would take about an hour to reach Poland, but it took her nearly 30 hours. “There were lots of cars, some people were just walking or running.” Iryna recalls seeing children with no parents. “They were just crossing the border by themselves,” she recalls “That was a very difficult experience to go through.”

Once in Poland, the question of what would happen next settled on Iryna. “When I got to Poland, I didn’t know for how long we’d be gone. Where would we go? When will I be back?” Iryna and her daughter had only one small suitcase between them and her daughter was only able to grab one doll. Iryna and Polina stayed for ten days in the home of her mother’s former employer.

It was during this time in Poland that Iryna received messages from friends she had met at Lebanon College. “All of them were texting me: Come over, we will help you, we will support you!” However, Iryna’s daughter did not have a US Visa and the line to apply at the embassy was so long they would have had to wait until June.

Luckily, another friend stepped in. Iryna’s previous employer from her time working at Elixir, longtime Lebanon real estate developer, Mike Davidson, invited Iryna to stay in his apartment in Mexico as long as they needed and apply for a US visa there. Iryna felt she had no choice as she does not speak Polish well and it was becoming difficult to manage expenses. So with Davidson’s help, she made it to Mexico only to run into the same issue as in Poland; the line at the embassy was even longer – the next appointment for them would be in July. Iryna thought, “Okay, what do I do here? I am stuck again, in Mexico, with my little one.”

An answer came: they would cross the border by foot into Texas at Piedras Negras. Davidson drove Iryna and Polina to the border, and Iryna met with another Upper Valley couple she knew from Elixir, Alice and David Glass. Iryna had kept in touch with the Glasses over the years. When the war started, Iryna says, “They also raised their hand saying we would like to help you and your daughter – what can we do?”

“That’s how we ended up in the Upper Valley,” Iryna says, now staying in the Glass’ Lebanon home, “We truly got lucky with support from Mike and the Glasses,” Iryna says.

When Iryna looks back at her journey, she remembers the difficulty but also how she was guided by helping hands. She doesn’t recall the pain or stress. “I knew I had to make it. I just remember focusing that I have to make it, to save Polina, to save her life.” Iryna remembers that every single day of the 83 days she spent fleeing Ukraine she was getting bad news from home and hearing of Ukrainians bravely defending the country. “I really focused on little steps,” she says, “Little missions – what has to be done to save myself and my daughter.”

Now in the Upper Valley, Iryna is figuring out what comes next. She is grateful to be in a safe home and safe place where people are looking out for her, but the stresses do not disappear. She is working on getting her daughter travel papers; as of now, Polina cannot leave the country. Traveling on a tourist visa, Iryna is also unable to work and finding it difficult to obtain her work visa, waiting over a month for a response. “That is a very difficult part because it could be that the country will benefit when I work and support myself, but I cannot do it because I’m not eligible right now,” she says.

She speaks of former employers who have reached out looking to hire her and notes the current employee shortages in this country. She worries that the difficulty of managing applications – she herself had to hire a lawyer for assistance – may discourage Ukrainian refugees from coming to the states: “I am lucky because I have friends who support and host me, but there are not a lot of people like that who have connections and can be here like I am.”

“It would be very good for the government to lose a little bit of those rules which are very difficult for Ukrainians right now. Even for me – I hold a US degree, I’ve been here, I lived here, I speak the language, but it’s very difficult to overcome all the bureaucracy just for the eligibility to work and for people who want to help.”

Along with concerns about expenses – she mentions that there is a huge difference between Ukrainian and American currency – Iryna is struggling with the lack of healthcare for herself and her daughter. “You need safety to feel comfortable,” she says, “and now I am not feeling safe.”

Iryna also has her family back home in Ukraine to think of. “I’m the only one from my family who escaped,” she says, as she is the only who speaks another language. In addition to her husband, Iryna’s mother, sister, and two nephews, aged 12 and 21, remain in Lviv. Her sister stayed in part due to her children’s ages: “It’s easier for her kids to understand what’s going on if they have to go and hide and stay silent.”

Two of her husband’s business partners joined the Ukrainian volunteer army while the partners elected her husband to stay and run the business. He volunteered to assist those in his company escaping Ukraine, arranging transportation to Poland, and supporting those who volunteered. “Half of their company is already fighting,” Iryna says. Her husband has also volunteered with Ukraine Catholic University, sorting humanitarian aid and shipping it across Ukraine and donated the use of his trucks to the Ukrainian army. “He’s happy to be helpful, giving his time to be of help to the Ukrainian army,” Iryna says.

Iryna is thankful she is able to see and speak with her family every day. She remembers the shock of losing connection when the Russians took out Ukraine’s internet. “I was abroad and didn’t know what was going on, but in six hours, we got it back.”

For those who continue to wish to help those in or fleeing Ukraine, Iryna recommends starting with the basics: “Put yourself in the shoes of someone: What do you need the most? It’s always very good to ask what is needed right now: How can I help you right now?”

Iryna carries a remarkably positive attitude considering everything she has been through, holding her composure in the face of circumstances most of us cannot imagine. She encourages people to stay united and stay strong: “All of us are getting very tired now – I’m Ukrainian and I’m very exhausted with the stress and worries. I would really hope and ask people to stay motivated, stay tuned, just to pray and get united for the peaceful hope that we overcome this all together. You never know who might need help sometime.”

She expresses her gratitude for the people in the United States: “I’m very proud that the US did not stay behind, they really stepped in.” She adds this fight is not just for Ukraine, but for democracy, for a better future for all of us. “We should not give up. We’re seeing that Ukrainians do not give up and all of us who are here watching should not give up.”

In an area such as the Upper Valley with a tiny Ukrainian community, Iryna expresses how much the support means to her: “I wanted to share how touching it is when you see Ukrainian flags, houses painted in our Ukrainian colors, and how people support Ukraine.” She wants to say “thank you so much for all of those little actions, even thinking about us really touches my soul.” She says this support also impacts those fighting in Ukraine: “I’m sure that a lot of Ukrainians who fight there and see how the world got united and supports us motivates them to get out and fight for the day.”

She looks forward to the day when Ukraine can return the favor by helping other countries in need of assistance and she can welcome us to Ukraine: “We invite all of you to come to our homeland, to our Ukraine, when we rebuild it. And I’m sure the day will come.”