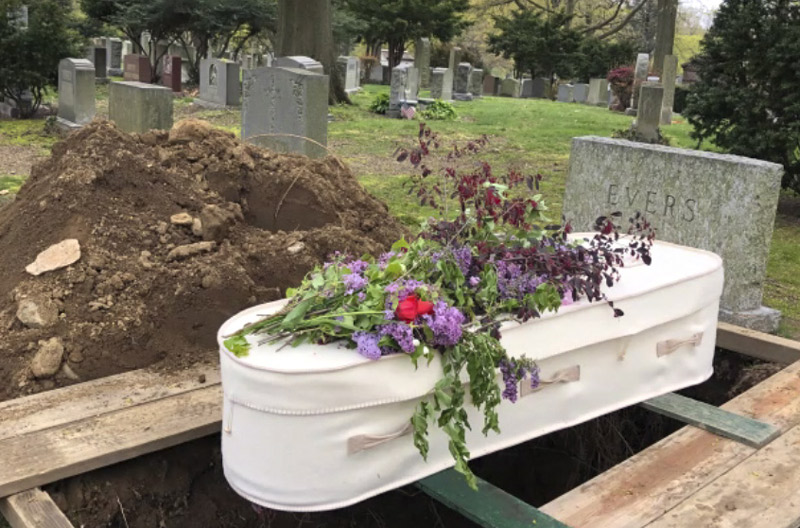 The concept of a natural burial as an environmentally friendly option in private and public cemeteries is becoming increasingly popular throughout the country, primarily for its minimal environmental impact, simplicity, and lower cost to the consumer. Historically, natural burials were the norm until modern funeral practices like embalming, caskets made from exotic wood, and non-biodegradable cement vaults evolved shortly after the Civil War in response to the desire to preserve soldiers’ remains until they were returned home to their families. Today, with more than 350 green burial cemeteries in the United States, natural burial practices are making a comeback, and municipal officials and consumers are evolving in their understanding of the benefits and management needs of natural burials.

In Lebanon, natural burial advocates are doing their part to provide helpful education and research on the subject, and many have been working with the Lebanon Board of Cemetery Trustees, City Council, and City staff since 2019 to arrive at a workable solution to the natural burial question.

There are a range of options to consider, but many communities opt for what’s known as a hybrid cemetery to accommodate natural burials, according to Lee Webster, Executive Director of New Hampshire Funeral Resources, Education & Advocacy and Vice Chair for Education for Green Burial Council International. Lee is one of the nation’s foremost experts on natural burials and lives in New Hampshire. “Hybrid cemeteries are usually municipal,” says Lee. “Natural cemeteries are generally owned and operated by consumers and vary from state to state. Then there are conservation cemeteries which permit burials in a natural setting, connecting people to the land in a different way than conventional cemeteries.” New Hampshire currently has approximately 11 cemeteries that support natural burials, and several Upper Valley towns are evaluating the practice, according to Lee.

According to Paula Maville, Lebanon’s Deputy City Manager, the City has been exercising due diligence in evaluating the natural burial option. “We want to meet the objectives of the advocates who want the change while at the same time respecting the staff in their need to evaluate the maintenance implications.” Among the considerations are determining designated areas for natural burials, grave depth, equipment requirements, and providing equity in the burial process in terms of fees and the City’s role. “There are lots of things to consider, and a lot to learn,” says Paula.

For their part, natural burial supporters are hopeful the City’s considered evaluation will bring about a fair resolution. Judith Bush and Rainie Kelly have been attending Lebanon Board of Cemetery Trustees and City Council meetings, sharing information, and contributing to the process of revising the ordinance that governs burial practices in Lebanon since the conversation began. Says Rainie, “The City Council is supportive and tasked the staff with evaluating the process. From my perspective this is all about good problem solving and Yankee ingenuity. My hope is that Lebanon residents will soon have the option to return to the more environmentally benign practices of our forebears.”

Judith Bush agrees. “We appreciate the support and interest of the City Council in listening to our perspective. It’s aligned with the City’s environmental statements and that’s important to us too.” Progress is being made, says Judith. “One issue that has been resolved is the location. There is agreement now that the West Lebanon Cemetery should be an option along with Old Pine Tree Cemetery, which has a hilly landscape.” There is also a commitment to use a rigid burial container rather than just a shroud covering, which is the practice in many countries.

The Lebanon Board of Cemetery Trustees has been gathering information about natural burials from a number of sources, including working with Lee Webster. Board Chair Tony Palazzo is a retired research agronomist who keenly understands soil composition. Tony considers Lebanon soils ideal for natural burials because they have good drainage. “We got advice from the Cemetery Sexton in Montpelier, which helped to answer questions about winter burials, staff roles, and using smaller equipment. We want to be thoughtful about how to implement this to make sure it’s a sustainable option.” Board Co-Chair Caitlyn Hauke, who succeeded Lee Webster as the President of the Board of Directors of the Green Burial Council International, thinks that natural burials will likely be a small fraction of the annual burials in the City. “At this point the City Council understands that residents have an interest in natural burials, and they want to support that, while making sure the staff impacts are considered.” Caitlyn expects the ordinance language to be finalized by the City Council sometime in March.

City Councilor Devin Wilkie thinks the process to consider natural burial has been thorough and informative. “From the data and the information that has been given to the City Council, the process seems doable. From a personal perspective I’m thrilled that this is something we’ve been able to have really constructive and thoughtful discussion about, and that City staff and the advocates are working together to bring this sustainable and ecologically friendly approach for burials to Lebanon.”

As the natural burial movement continues to grow, new resources are being made available, such as the Green Burial Masterclass created by Lee Webster and offered in partnership with the education organization Redesigning the End. The course explores best practices informed by science, conservation, cemetery operations, and religious and cultural concerns. Lee sees this development as a reflection of more and more consumers making their voices heard. “Pioneers have been starting cemeteries and making them work. Growth is big, and demand is increasing.”

For Lebanon natural burial pioneers and City officials, the time spent learning about this new, yet old way of putting loved ones to rest seems to have been well spent.

« Previous post
From Ukraine to the Upper Valley: 83 Days for a Life to Change
Next post »
Sarwar Kashmeri: Not Slowing Down Any Time Soon