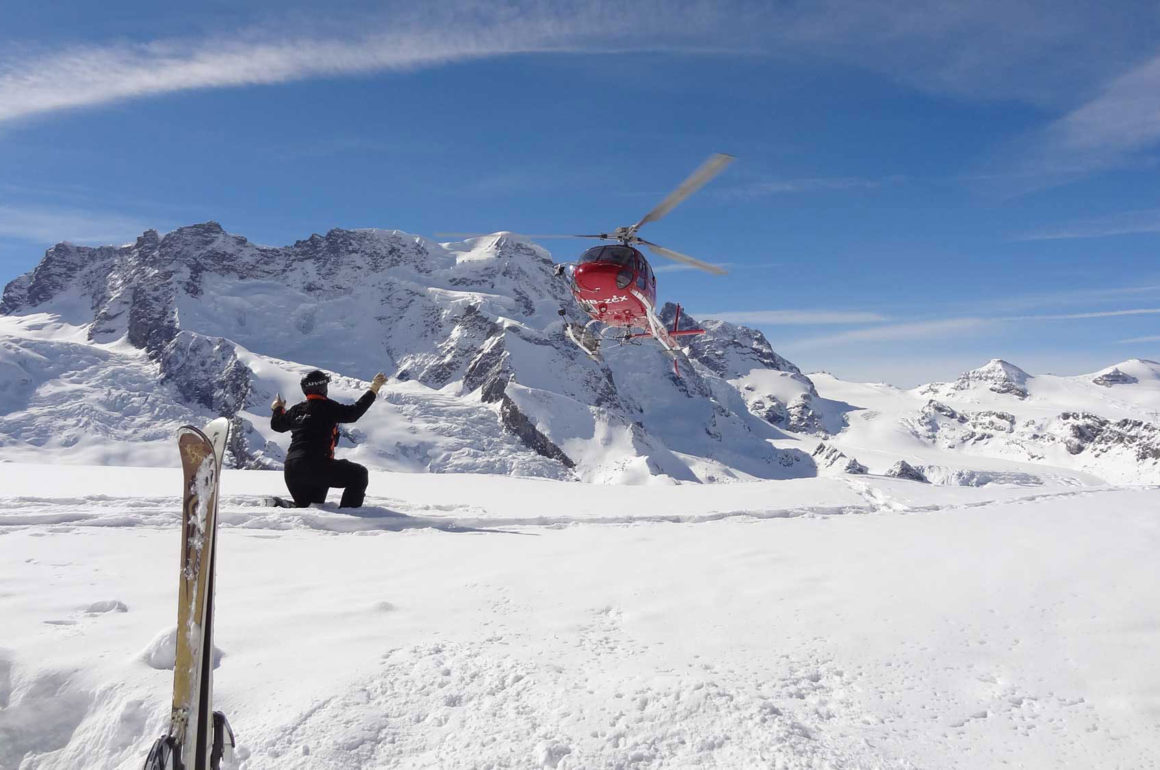 “If it has happened to a traveler, we have probably seen it!”

There are brave people in the world who willingly put themselves at risk to save us when we are in harm’s way. They have chosen to devote their lives to a company that rescues us just about anywhere we choose to travel around the globe – Global Rescue.

At home here in Lebanon when we fall and need help, we dial 911 and an ambulance and its well-trained crew comes to our rescue usually in a matter of minutes. But, what if we are in South Africa on a Safari, and are mauled by a lion? We are losing blood and need to get to a hospital, but are not sure where there is one or how long it will take to get there.

If we are wise, we had become a member of Global Rescue before we left, and at our fingertips are doctors and hundreds of other supportive people ready to jump in and solve our problem. We had set up a pre-arranged way to communicate with Global Rescue personnel, a doctor listened as our group described the event, and was able to receive a photo of the wound. Advice is given for stabilizing both us and the wound, while at the same time Global Rescue’s support staff have located the best nearest hospital where we can be transported safely to medical care.

How did this concept of saving people who travel to unique places around the globe come about? Dan Richards, who grew up in the Upper Valley, has always been an active, strong, smart adventurer. As he traveled, at times to dangerous destinations, he thought about how he might get out of sticky situations to safety. Who would come to his rescue in faraway places where dangers constantly lurked?

During Dan’s career development, he attended The Amos Tuck School where he studied with world-class thinkers, exploring ideas and learning the framework for decision-making. This education formed the groundwork for his idea to combine his travel experience with his entrepreneurial abilities.

In 2004, Global Rescue was born. Dan is the founder and CEO, and his wife, Melissa, is a Vice President and the company’s General Counsel. Dan forged a unique collaboration with Johns Hopkins Medicine, and Global Rescue now provides first-class medical consulting services along with the ability to deploy personnel to the site of a traveler’s crisis just about anywhere in the world. 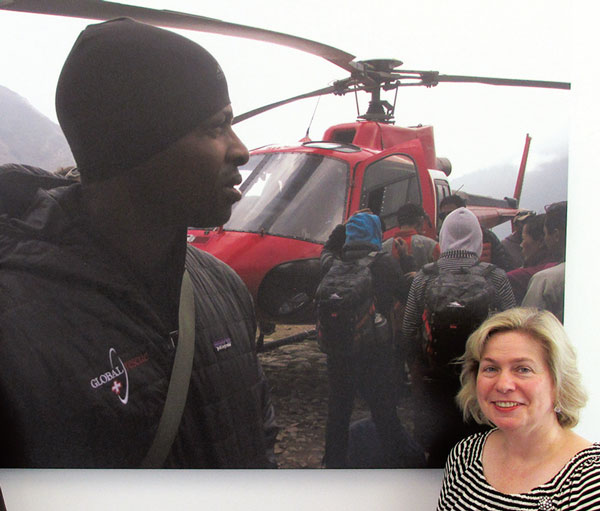 Dr. Devon Davis poses with a life-size poster of a Global Rescue mission

Dan says, “We can help people during their moment of greatest need or their darkest hour. If it has happened to a traveler, we have probably seen it. We use all means at our disposal to deliver our services and to get the folks that we’ve pledged to get out of harm’s way to safety.”

Global Rescue provides medical and security crisis response services to individuals, families, corporations and governments. Before setting off on a trip, one becomes a “member” by purchasing the appropriate membership. Travelers download the Global Rescue “app” which includes GPS tracking and a one-touch emergency button. Two-way communication is paramount to the success of a rescue.

Global Rescue’s response team is made up of highly-trained critical care paramedics and physicians, and security personnel – many of whom are drawn from special operations in the military. All are ready to jump into action when “the call” comes in. There are over 200 medical centers all over the world, thousands of aircraft under contract and ready to go, and teams all over the world that can be mobilized quickly by Global Rescue.

When the call comes in to any one of the operation centers, like the one here in Lebanon, they provide potentially life-saving advice on that first phone call. These are the “nerve centers” where everything is coordinated. Their network gives them access to a huge range of assets that allow Global Rescue to operate in virtually any environment imaginable. 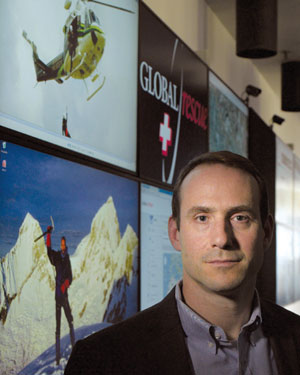 Dan Richards, CEO, with large wall display showing many of the various missions in which they are engaged every day.

Boston is a major Operation Center. “Boston was chosen because it has a major hub airport and the talented employees of a major city,” explained Dan. The headquarters for Global Rescue is right here in Lebanon, comfortably housed in a large part of the Rivermill Complex. Dan says he chose Lebanon because, “It is two hours from Boston, so it’s far enough to likely escape any calamity impacting Boston, but close enough to manage without needing an airplane. New Hampshire is also very business-friendly relative to Massachusetts, and our employees enjoy an unparalleled quality of life in the Upper Valley relative to Boston.”

An example of some missions Global Rescue has been involved with includes over 70 just this year, alone, on Mt. Everest. Two paramedics are stationed there for the two most popular climbing months and have many other resources under contract, including helicopters, ready to set out as needed. Another involved a stroke victim in a South African hospital. Several Global Rescue medical personnel dispatched to help, and through Global Rescue’s services, a plan was set to bring the member home to the USA. In fact, Global Rescue has been involved in most of the major global crises in the last decade: Mumbai, Haiti, Lebanon … conflicts, earthquakes, volcanoes, floods, etc. They have worked to remove those members who have become trapped in situations and who want to flee to safety.

Dan assures us that, “We will not stop until the care that’s needed is provided and the people who need to come home have been brought home.”