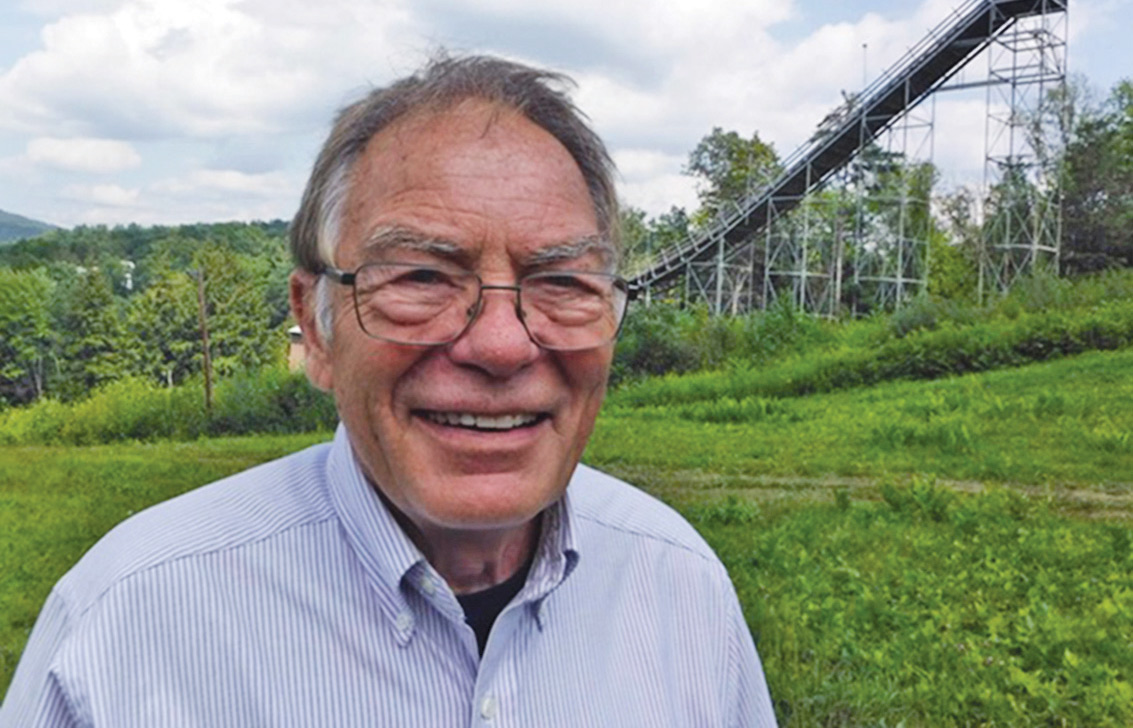 In recent years, the trend in the ski industry is for major corporations to own most of the country’s ski resorts. Companies such as Vail Resorts, Peak Resorts, and Boyne USA own resorts across the United States, and even internationally. Yet a few independent mountains still operate, drawing local residents and visitors alike, who like the idea of supporting a locally run, locally managed ski operation.

New England once was home to numerous small, local ski operations. Many of these have disappeared over the years, victims of the appeal of huge ski resorts with dozens of trails, major snow making capabilities, and numerous amenities, such as waterparks, hotels and conference centers, and multiple restaurants.

One small, local, and independent ski area that still exists is here in Lebanon; the Storrs Hill Ski Area. Located right in the heart of the town, Storrs Hill affords local skiers, youth groups, and school teams the luxury of a ski experience close to home. 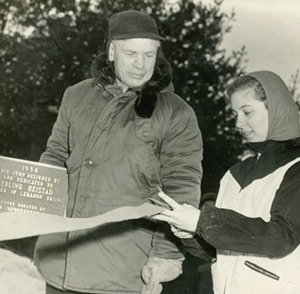 Erling Heistad at the dedication of the
Heistad Hill in 1954; plaque now mounted
on the front of the takeoff

Storrs Hill’s history goes back to the 1920s, when a Norwegian immigrant to the area, Erling Heistad, had a plan to develop ski jumping as a sport in New Hampshire. Heistad created the first ski jump on the hill, and also was instrumental in clearing the first ski trail. As skiing grew in popularity in the 1930s, a rope tow was installed on the hill, allowing skiers and jumpers to take greater advantage of the area.

Heistad’s son, current Lebanon resident Erling Heistad, says his father was dedicated to introducing ski jumping to the young people of Lebanon. “He was an engineer, and very interested in the design of ski jumps,” says Heistad of his father.

The elder Heistad built his first jump at Storrs Hill in 1923. That first jump was located further up the hill from the current 50-meter jump. Along with constructing that first jump, the elder Heistad founded Lebanon’s first outing club, enlisting high school students in the effort to construct, use, and maintain that jump. The ski jump at Storrs Hill was not the only one his father constructed, says Heistad. “He had a goal of a jump in every neighborhood in town,” Heistad says.

Giving Lebanon’s children a winter recreation opportunity was important to his father, Heistad says. “He was really interested in the kids.” Even today, evidence still remains of those early neighborhood ski jumps Heistad and his students built.

After construction of that first ski jump at Storrs Hill, other jumps were built over the years at Storrs Hill, including the current 50-meter jump, first constructed in the 1950s. “He designed them all,” says Heistad of his father.

The ski area at Storrs Hill was operated by the city of Lebanon for many years; however, by the mid 1980s, the cost to the city of operating the hill became too expensive. From that point on, Storrs Hill fell under the supervision of the Lebanon Outing Club (LOC). A volunteer effort, the LOC members work year-round to keep the local ski slope open and running. 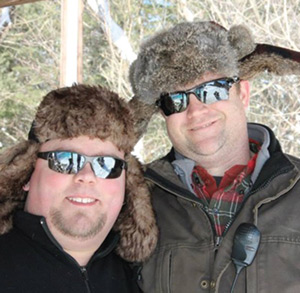 Cory Grant, president of the LOC, and
Ryan Cilbrith, director of the Ski Patrol at
Storrs Hill

Cory Grant, LOC president, says operating Storrs Hill is a labor of love for the members of the group. During the ski season, Grant estimates that 8 to 10 volunteers work at the hill each day. Volunteers perform all the functions normally associated with running any ski slope. Those functions include snow making, grooming, operating the lifts, ticket taking, and coaching. Grant says he puts in an average of 25 to 30 hours each week helping to keep the hill operating in the winter. The work does not end during the summer, either. Volunteers spend time on course and equipment maintenance, as well as grant writing and fundraising during the off-season.

Of course, skiing is not the only activity at Storrs Hill. Ski jumping remains an important part of this local venue. Storrs Hill has a storied history as a ski jump area, and that activity continues today, with many high school meets held there. In fact, New Hampshire is the only state that offers competitive ski jumping as a sport for high school students. Other towns in New Hampshire that offer ski jumping for competitors are Newport, Plymouth, Andover, and Hanover.

What is it like learning to ski jump at Storrs Hill? Former Hanover resident and high school ski jumper, Robin Colt, first experienced jumping at the Lebanon hill in the 1990s. At around age 10, Colt first tried jumping on the hill’s smaller 10-meter jump. She says she found that experience similar to going over hills while alpine skiing. The next step was moving to the 25-meter jump. Colt says climbing to the top of this jump, and preparing to take off, caused the adrenaline to pump. “You have a pit in your stomach,” says Colt.

One of the most important aspects of learning to jump is practicing your form, Colt says. She adds the instruction she received at Storrs Hill was great. “The coaching there was unbelievable,” she says, giving special accolades to her father, Rick Colt, and John Farnham, long-time manager of the ski area, and ski jumping coach.

Operating a ski area is a daunting proposition. Despite relying on volunteers for much of the labor at Storrs Hill, there are considerable operating costs in running the ski area. Grant estimates the annual budget for operating Storrs Hill is around $85,000. The City of Lebanon (which owns the Storrs Hill property) provides some funding for operations to the LOC. Grant says the LOC also relies on an endowment for some of the budgetary needs, but his group also spends considerable time writing grants and fundraising for hill operations. Lift tickets and season pass sales also help run Storrs Hill, though the LOC keeps prices low on these to allow as many as possible to use the slope.

Besides the normal costs associated with operations, certain capital improvements are necessary from time to time. Last year, Grant says the LOC needed a new pump for snow making operations; the contractor involved afforded them a great discount, but the pump still cost $20k. This year, Grant says they are making lift and cable upgrades, along with replacing the windows in the lodge, which are failing. New stainless steel track for the 25- and 50-meter jumps are another addition. 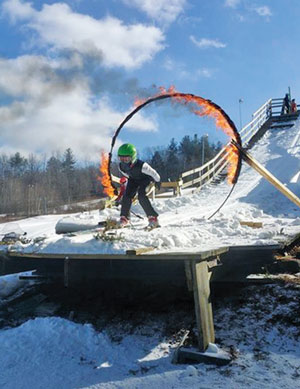 The Ring of Fire is the closing of the jumping
program, typically the last scheduled
competition for the year. All participants
are welcome to ski through the ring of fire
at the end of the event.

Despite being a small ski area, Storrs Hill does have a big claim to fame. World Cup and Olympic slalom champion Mikaela Shiffrin spent some of her early years skiing at Storrs Hill, before moving on to Burke Academy and the U.S. Ski Team. In the mid 2000s, Shiffrin could often be found practicing for hours on the Storrs Hill slopes.