“Hearts You Hold” Matches Donors with Those in Need 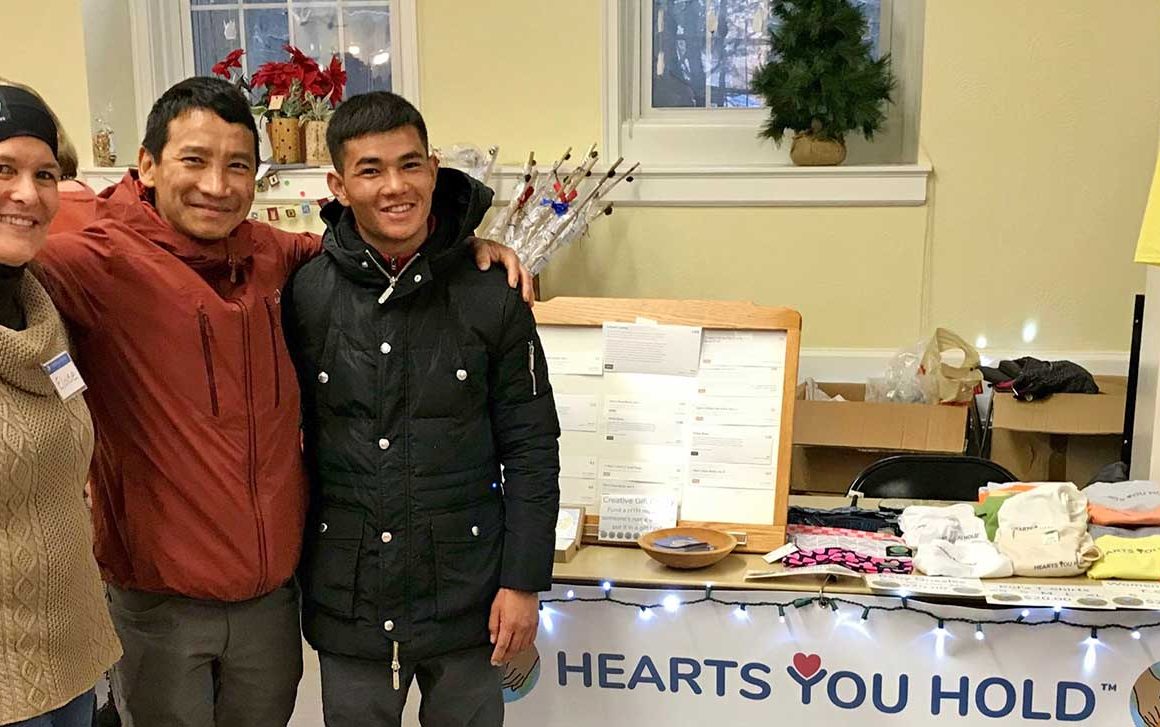 Following her retirement as principal of Mount Lebanon Elementary School, Eloise Ginty wanted to spend her time on meaningful projects that would have a positive impact on people’s lives. So, she began volunteering for non-profits that focused on migrant justice and planned parenthood, but she quickly learned that her leadership skills and experience were calling her to take a different path. “I had been a leader, and I felt that I needed a bigger project for transition into retirement,” said Eloise. “I wanted to keep it focused, with a clear vision.”

While on a pre-pandemic road trip, Eloise was reflecting on her next steps, and recalled her social activism days during junior high school cleaning garages to support children in other countries who needed funds to attend school. Her activism continued with a job as a camp counselor for children of migrant workers supported by Cesar Chavez, the Mexican American labor leader and civil rights activist.

Soon the vision for a new non-profit began to take shape and Eloise worked to refine the focus of the organization. What emerged was an all-volunteer organization and giving program called, “Hearts You Hold,” or HYH. HYH matches donors with migrants, immigrants, and refugees around the country and locally to provide what they need and want to thrive in their new home. “I originally thought of the name ‘Heart to Heart’ but that was taken by many organizations,” said Eloise. “I was looking around for something similar and ‘Hearts You Hold’ popped up and I really liked it.”

Individuals and families make the journey to the United States from their home countries for many reasons: to receive an education, reunite with family, to seek work, or to escape persecution and violence where they live. According to the New Hampshire Department of Human Services, there are nearly 400 refugees in various resettlement communities around the state, and Vermont supports roughly the same number annually. Immigrants who choose to become U.S. citizens and seasonal migrant workers, largely employed in the agriculture field, also need support adjusting to the systems and culture of the United States.

“I wanted people to feel supported and welcomed given the history of how difficult it is for immigrants, migrant workers, and refugees to transition to a new place.” With national bans on immigration and other challenges, Eloise wanted to give potential donors an opportunity to impact specific individuals that they might know or work with. “I realized that people who want to be helpful don’t necessarily know how to be helpful.”

A partnership with the national non-profit Catholic Charities started the ball rolling with referrals coming in from around the country. While this approach began to have the impact Eloise was looking for, she wanted to focus locally, as well.

The organization’s board members and volunteers are largely from the Upper Valley, some with connections to Dartmouth’s student-run FUERZA Migrant Outreach program. Another local volunteer is Bise Wood Saint Eugene, a LISTEN staff member originally from Haiti, who learned about Hearts You Hold while searching for a way to help people through his work and personal contacts.

Bise Wood shares the Hearts You Hold philosophy to provide “what people need and want, rather than assume we know what they need.”. Reaching out to the people he knew in the community and through his LISTEN contacts, Bise Wood developed a gas card program to help people get to medical appointments, interviews, and other important destinations. More than 20 gas cards have been funded to date. “I feel like there are too few resources for the number of people who are in need, whether it’s mental health, housing, homelessness, childcare, or food. I hope that more people will think deeply about the necessity to make reliable and predictable resources available to all persons in the Upper Valley, and be willing to learn from others, hence becoming more concerned about others in their community who are suffering.”

Bise Wood’s journey to the Upper Valley is rooted in finding a safe and secure place for his family to live. “I founded a non-profit, the Organization for Holistic Development of Communities in Haiti with a focus on helping kids go to school free of charge. My work collided with corruption practices. Those forces – you can’t avoid them – and it made my life difficult. I had left the country several times due to death threats, and in 2014, I finally decided to settle in the Upper Valley. My life and that of my family were in danger.”

When Bise Wood decided to move to the U.S., his Red Cross colleagues who had been assigned to work in Haiti, including his former supervisor, encouraged him to move to the Upper Valley. They understood the challenges and risks Bise Wood faced in Haiti doing the work he loved. “I did research on how Lebanon had a low crime rate and was rated as one of the top small towns in America,” he said. “I have been here for seven years and haven’t seen any crime.”

While he is appreciative of the efforts by the various groups there are still many gaps to fill. “There is a good response at the organizational level, but there aren’t enough mental health services, resources for hom‑elessness and affordable housing. “I think one way it could change is if everyone receiving services could participate in the decision-making and not be afraid of being discriminated against. They don’t have a platform where they can express their suffering and where others could hear about it and learn from the circumstances that led to their situation.”

Direct connection between potential donors and those in need is the beauty of the Hearts You Hold model. Most of the volunteers for the organization have been connected to migrant farm workers specifically, but Bise Wood’s work has encouraged Eloise to understand the broader need here in the Upper Valley and nationwide. “Part of my work involves reaching out to non-profits who are willing to query their constituent group about what they need, and then upload the requests to the website,” says Eloise.

She also spends time establishing sustainable relationships with organizations and individuals so that as many people as possible can be helped.

One poignant story involves a child who requested a guitar. It turns out, the request was made so that the child who crossed the southern border alone, could learn to play so he could stay connected to his father. The request was funded and made a huge difference in the child’s life here in the U.S. Eloise says, “It’s not my role to make judgments about the requests. You never know why someone needs or wants something that might have special meaning for them.”

For his part, Bise Wood appreciates being able to use the LISTEN platform to give voice to the unique needs of the Upper Valley’s population of migrants, immigrants, and refugees, as well as his own social connections. “What I love the most about LISTEN is that our services are available to everyone regardless of race, ethnicity, religion, political view, group affiliation, and background. I just put myself out there and do what I believe in, which is helping other people.”

Fortunately for the Upper Valley community of immigrants, migrant workers, and refugees, Eloise seems to have met her goal of finding a bigger project to focus on in her retirement by creating Hearts You Hold.

For more information about Hearts You Hold, to make a secure online donation, or to get your organization connected, visit https://heartsyouhold.org or contact Eloise at info@heartsyouhold.org.