Lebanon High is First at FIRST 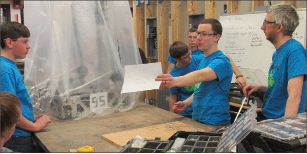 Students at work building the robot, “Ada,” in the shop at the Hartford Area Career and Technology Center in White River Junction

Assemble a group of high school students in a room with pieces of aluminum, wheels, motors, nuts and bolts, give them strict guidelines and a goal, time constraints, rules and regulations, and stand back! With the help of adult mentors and teachers, after about six weeks, what appears out of a pile of inanimate objects, arises a seemingly “animate” entity – a robot that obeys commands, moves around the room, and completes tasks. But, why? Glad you asked!

There exists a worldwide high-school-age robotics competition called “FIRST Robotics Competition” (FRC). FRC teams compete on local, regional and international levels to see who has the fastest, most robust robot with the most cunning strategies that enable it to accomplish the goals for which it was designed.

On the first Saturday in January each year, FIRST releases the rules of the all-new game via a video sent around the world to the nearly 3,000 teams involved in this program. The video reveals how the new playing field is to be set up, what tasks a robot will be performing in order to win the most points, and any other rules. Everyone watches it at the same time (all local times), then, starting all at the same time, and for six weeks and two days following, they build their robots. The students define a problem, choose a design, brainstorm prototypes, and then develop, review, and improve upon their design.

During this six-week process, students learn to safely handle tools, design parts, form sub-teams, solve problems, communicate efficiently and effectively, work with people who might have different views and methods, and figure out how to best build a robot that will work under pressure.

My husband, Jim, and I had seen on WMUR that there was to be a FIRST Robotics Competition at Nashua High School on February 28. We had an inkling of what FIRST was, but seeing that a team of students from Lebanon, Hartford and Hanover High Schools was going to compete, had us in the car heading south to learn first-hand what it was all about.

Grayson Daly working on “Ada, Duchess of Lovelace.” Grayson is wearing a Tiara, typical of what a Duchess would wear.

Our local team, The Grasshoppers (#95), first competed in 1997, and is now sponsored by CRREL, HACTC IMW, BAE Systems, The Byrne Foundation, and Lebanon High School, among many others. Their robot is named “Ada Lovelace” (Google the name to discover the connection), and was designed specifically to play in the 2015 FIRST Robotics Competition (FRC) game, “Recycle Rush.”

We found it to be a lot like a high school athletic event where teams compete in games of skill – except in robotics where the game changes every year. This was a competition of the “minds”, but we soon found that hearts and technical skills were also involved.

In Nashua, a huge room just off of the gym, nicknamed “The Pits,” was divided into spaces in which each competing team could work on its robot if needed. This area was abuzz with hyperactivity before the competition, as each team made sure its robot was functioning well.

The large gym was filled to overflowing with high-spirited teams, their support people, and spectators, all sitting together in blocks on the bleachers, cheering loudly and supportively for all of the competing teams. The floor of the gym was set up as a large space surrounded by clear polycarbonate walls containing the area in which the competition was held, and behind which the students were actively controlling their robots.

The three teams making up the winning alliance from Nashua. Teams 1519 and 1307 were The Grasshoppers partners. The Drive Team for Team 95 consisted of the four in the middle and are Grayson Daly, Max Porter, Sawyer Blais, and James Cole-Henry, the coach.

There were team costumes and colors, team shirts and logos, team banners and flags, and music, to which everyone sang loudly and with feeling! But what was truly eye-opening was the spirit! When various teams marched into the gym and made their way around the floor to their assigned areas – six teams at a time – everyone cheered loudly for each other.

They cheered for a team when something good happened and groaned aloud when something went wrong. There was absolute lack of aggression or poor attitudes, and an abundance of kindness and politeness. We met some of them first-hand, and were over-the-top impressed with their sincere desire to work together in support and friendship.

One of kids wore a tee-shirt proclaiming “We, not me!”

Each robot is skillfully manipulated by two team members using joysticks connected to a laptop that communicates with the robot through WiFi – during the times when the robot is not driving “on its own!” The robot is on wheels, has arms, a compartment that stores gathered items, and can wheel and spin and dodge and go slow or fast. The goal was to pick up and stack four plastic totes, put a green plastic trash can on top of those, and feed a “noodle” into the hole on top of the trash can, all done by the robots. Repeat this process as many times as you can within a time limit. 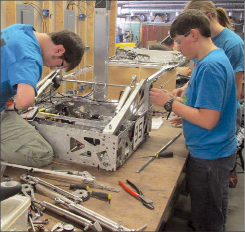 Coach Cole-Henry explains what is about to happen when Ada is unveiled and work is to begin to get her ready for the next competition.

After watching for just a while, these “bots” seemed to take on their own personalities: stubborn, contemplative, ferocious, fearless, precise, etc. We found ourselves soon becoming very involved in the process and were screaming along with everyone else with joy and excitement at these amazingly skilled kids and precisely built and guided robots.

Team 95 competed, kept winning each round, and came in first at this competition. At the end of their regular season they ranked 14th out of 175 teams in all of New England as winners of one event, semi-finalists in another, and winners of an Engineering Excellence award, sponsored by Delphi.

FIRST and FRC came about because of the foresight, generosity and belief of one unique man – Dean Kamen – an inventor, entrepreneur, and New Hampshire man. FIRST means: For Inspiration and Recognition of Science and Technology. Its mission is “to inspire young people to be science and technology leaders by engaging them in exciting mentor-based programs that build science, engineering and technology skills, that inspire innovation and that foster well-rounded life capabilities including self-confidence, communication, and leadership (from the FIRST website).

“FIRST is more than robots. The robots are a vehicle for students to learn important life skills,” said Dean Kamen, president of DEKA Research & Development and FIRST Founder in 1989. “Kids often come in not knowing what to expect – of the program or of themselves. They leave, even after the first season, with a vision, with confidence, and with a sense that they can create their own future.”

So, what kinds of kids are attracted to the “FIRST” programs? They are a variety of ages (starting at age 6 through 18), both boys and girls, who have an interest in science and technology and who benefit from working with other students in their own schools and other schools in their area. They soon find their own talents and make friends with those having similar interest. They also find that they fit in well and have success where they are allowed to be themselves and have the support of their peers as well as mentors and teachers.

Now, take a big step back to 2004, when Rotary District 7850 held its Annual Conference at Lake Morey Resort, and I was there. One of the most interesting events of the weekend was the demonstration of a robot by members of The Grasshoppers. This robot could pick up a large beach ball and toss it with accuracy into the box on the floor. In the “small world department,” during the writing of this article, I learned that one of the two students demonstrating the robot at that Lake Morey event was James Cole-Henry, now the head coach of The Grasshoppers! He graduated from Hartford High in 2005. Another student was Andrew Alvarenga of Hanover High School. James and Andy are presently coaches of The Grasshoppers. James and his wife Ashley are mentors who work many hours with the team.

To learn more about this exciting, unique and important program, please visit www.usfirst.org. To see what the local team, The Grashoppers, is doing, visit www.frcteam95.org. I assure you, it will be the beginning of an amazing experience. They are always looking for more students and mentors, technical and non-technical, to join them. If you are at all interested, please inquire!