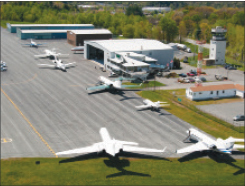 Braxton Freeman has been keeping a trained eye on the Lebanon Airport from his lofty perch in the FAA Contact Control Tower since his arrival in 2006. As the Air Traffic Manager employed by Midwest Air Traffic Control Service, he has not only diligently handled the pressure-packed profession of assuring air traffic safety, Braxton has witnessed first hand the up and down financial battle to maintain the facility.

With the recent loss of some valuable federal funding for the Lebanon Municipal Airport, some area residents are questioning just how essential is the service provided by the airport that covers 563 acres. Does a city with a population of just over 13,000 need to have and maintain an airport?

Braxton is an expert on that subject and air traffic safety is his passion. He is 58 years old and was born in Berkeley, California and currently resides in Quechee, VT. He received the majority of his training in air traffic control in the United States Air Force before completing the rigid certification process required by the FAA. Does Lebanon need this scenic airport?

“Absolutely!” Braxton stated with emphasis. “There is a tendency for people not to look at the entire picture when it comes to the Lebanon Airport. There is a lot that is overlooked and not visible. True, it has just lost some federal funding based on FAA standards. True, there is just one airline, Cape Air, that offers connecting flights to other major airports. However, the private air traffic at this location is essential in attracting and maintaining private business. One key factor for prospective businesses locating here is the close proximity of an airport. Lebanon offers that.” 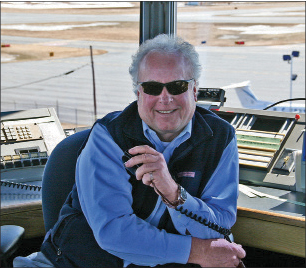 Also located on the grounds, one may find the Granite Air Center, a locally owned fixed base operator providing refueling, hangar storage along with parking for aircraft and a complete maintenance center that is state-of-the-art. The Granite Air Center also houses one of the plushest and most relaxing reception centers in the Upper Valley.

“The corporate aircraft traffic here is critical. Both Dartmouth College and the Dartmouth Hitchcock Hospital utilize this airport along with many of the corporations in the Upper Valley. The celebrity list that has gone through here ranges from President Obama to Paul McCartney of the Beatles. Graduation time at Dartmouth College is a busy time for us.” Braxton explained.

The business of assuring air safety bears a heavy responsibility and Braxton and his staff of air controllers are up to the task. They constantly keep an eye on the sky.

“Weather is the key issue for safety,” Braxton said. “Our training and updating revolves around the latest techniques in forecasting weather conditions. Here in Lebanon, weather can change in an instant. The wind direction at this high location can change in a heartbeat. From the first time a pilot calls in his approach to the runway, the wind can shift drastically. Winter offers the worst conditions.”