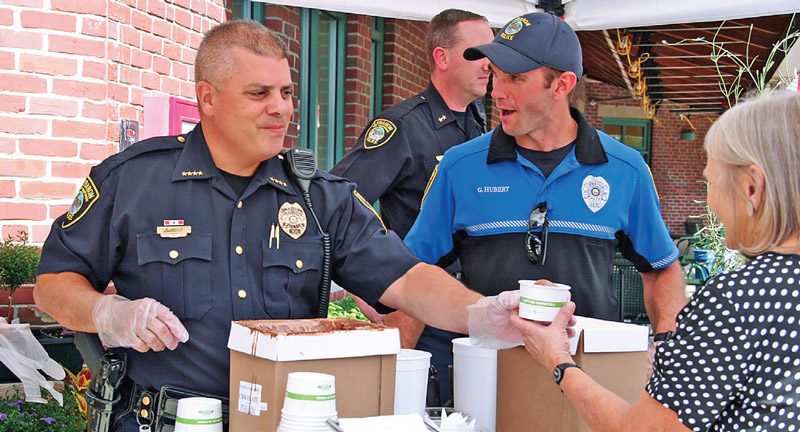 These have become tumultuous times for police departments all across the United States, but here in Lebanon, the spotlight shines brightly on one of the highest rated law enforcement agencies, not only in New Hampshire, but the entire country.

Working hard to establish excellence for the last five years has been Lebanon Police Chief Richard Mello who recently announced his retirement at age 48 to accept a position in the private sector. He will be followed by Deputy Chief Phil Roberts, a 20-year law enforcement veteran who has worked hand-in-hand with Chief Mello on the Lebanon agency for the past five years.

Chief Mello describes, with a great deal of pride, his accomplishment during his tenure.

“Gaining the CALEA Accreditation in 2020,” he stated. “It was a difficult three-year process and less than 5% of police departments nationwide have the distinction of being accredited.”

Chief Mello now looks to the future with his new endeavor and explains his departure.

“I have served in New Hampshire law enforcement for 28 years and felt it was the right time to retire and pursue the next chapter in the private sector. My replacement, Deputy Chief Phil Roberts,  has been a solid presence for more than 20 years. He has the character, skill set and temperament to lead the department into the future.”

The Deputy Chief is certainly no stranger to the Upper Valley, having been raised in the Hartford, VT area where his father served as deputy chief.

“I do feel there is a definite advantage to having a local connection. The over 20 years I have been with the LPD has allowed me to build many great relationships and contacts with the entire Upper Valley community. Chief Mello will be missed by all. He has left the PD in a great position with many positive changes he has made over the last five years, and I look forward to carrying on those in the future. His leadership here was first class.”

Five years ago Chief Mello was drawn to the Lebanon area after having served in law enforcement in Concord, Manchester, and the Hollis, NH areas for 23 years. What appealed to him about the prospect in Lebanon?

“I was drawn to the Upper Valley area and the Lebanon community along with the police department’s professional reputation. I would describe Lebanon as a city on the rise, rich with culture and diversity and having abundant opportunities.”

Deputy Chief Roberts will have the new insignia on his uniform’s collar May 1st, and is eager to accept the challenge.

“Some priorities that I have moving forward are maintaining the national accreditation that we received from CALEA last year which is the gold standard in law enforcement regarding best practices and policies. I also look forward to when the pandemic is over and returning to our community relations programs and efforts that we have not been able to do over the last year. I don’t have any big major changes in sight. I have worked closely alongside Chief Mello and we share the same philosophy when it comes to managing the police department. I am honored and look forward to serving as the next Lebanon police chief.”