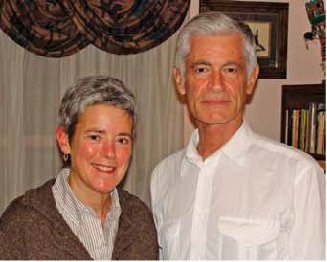 “I have taught in four schools in four states over the past 30 years, and I have found it increasingly problematic that most high school programs of study spend so little time on the current global situation. American history courses seem to struggle to get past Vietnam; world history courses seem lucky to get to the Cold War. Yet, how can we expect our future citizens to make intelligent voting decisions, let alone survive in a world that is now so interconnected, when they have virtually no understanding of contemporary global events? Not only do we need to teach more about the global community in which we live, but we have to teach about it in a way that will foster 21st century skills and a disposition to care about being active global citizens.”

Deborah Springhorn has a passion for education. Raised on Long Island by a father who was assistant superintendent for business for the local school district, and a mother who spent 15 years on the local school board, “public education is in my blood,” she said.

And so is the innovative interdisciplinary approach to education that helped win Springhorn, a Lebanon High School English and social studies teacher for 22 years and resident of West Lebanon, the 2013 Christa McAuliffe Sabbatical administered by the New Hampshire Charitable Foundation.

“It’s so obvious what sort of possibilities derive when you merge disciplines,” Springhorn said in a recent interview. “One plus one equals three.”

Her experience with interdisciplinary teaching goes back to the early days of her career, when, as a dually-certified teacher asked to take on both English and social studies, she developed and taught her first interdisciplinary course in Stroudsburg, Pennsylvania.

Now, after more than three decades teaching, Springhorn has received the gift of time to spend developing a project that stands to benefit teachers – and students statewide.

“It’s phenomenal to have time to focus on something I’m so passionate about,” she said.

Springhorn is spending this academic year developing and promoting the curriculum she proposed for the McAuliffe award, “Global Issues Since the Fall of the Wall.” The four-unit course includes:

• America After 9-11: The Single Story of Afghanistan, Pakistan, & Iraq

• Frustration & Hope of “The Arab Spring”

• Globalization: The Crisis of Consumption 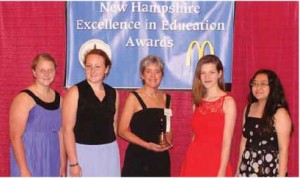 Springhorn (center) received the 2013 Christa McAuliffe Sabbatical at the New Hampshire Excellence in Education Awards in June. From left to right, she was accompanied by LHS students Audrey Swift, Hana Laramie, Meg Zuttermeister, and Chelsea Paige.

“Teaching about the world in which we live right now is really imperative. The world is getting more difficult to understand,” Springhorn said. “It’s scary to get up in front of a classroom and teach about stuff for which nobody has the answers.”

With the new course she’s developing, which will be promoted and made available to schools across New Hampshire, Springhorn hopes to make that task just a bit easier for teachers. “It’s plugging a hole that I think everybody realizes exists.”

Springhorn’s curriculum is inspired by the renowned photojournalist James Nachtwey, a Dartmouth alumnus who has photographed global conflict and strife since the mid-1970s.

“He’s my hero,” Springhorn said of the photographer. “I’m trying to do with curriculum very much what he’s trying to do with his photographs. He’s pretty much been everywhere I’m teaching about. He’s put himself in harm’s way to chronicle conflict in the last 40 years. His photographs are hard pictures to look at, but they are artistically beautiful. They evoke all kinds of questions. There’s a lot you can harvest from a photograph like that. He’s a magnificent artist.” 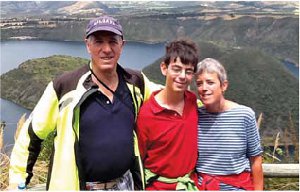 Springhorn with son Ariel and husband Stephen Silver at Cuicocha, a 2-mile-wide caldera and crater lake at the foot of Cotacachi Volcano in the Cordillera Occidental of the Ecuadorian Andes, at an altitude of 10,650 feet.

Springhorn has had the good fortune to meet Nachtwey several times, including nearly a decade ago when she and her LHS class gathered with him at the Hood Museum in Hanover to look at and discuss his works. The idea for the proposal came to her when she attended one of his lectures more recently. Nachtwey consulted with Springhorn on the images selected for her course proposal and attended a celebratory dinner party she hosted after receiving the sabbatical award.

In addition to developing the curriculum with a day-by-day plan, handouts, assessments, and other course materials, Springhorn must also pitch schools to adopt the course, and create a user-friendly website to make the curriculum accessible to teachers around the state. She hopes teachers using the course will use the website as a place to help revise it over time to keep pace with world events.

She’s also seeking funding to provide grants to schools wishing to adopt the course, which she estimates will require an investment of about $2,000 in books and materials per school to teach a class of 24. The Byrne Foundation has already pledged its support.

“It’s really important to me. This is what I live and breathe. I want this to be the capstone of my career,” Springhorn said.

The “Global Issues” curriculum to which she is devoting her year seems like a very fitting accomplishment for Springhorn’s work and life both in and outside the classroom.

“Education is our highest priority,” she said of herself and husband Stephen Silver, director of international student programs at Dartmouth. After that, “our priorities are food, wine, and travel.”