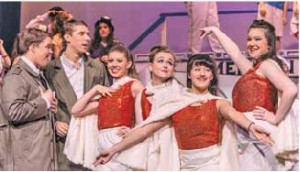 Over the last decade there has been a resurgence of interest in musical theater. With the success of shows and movies like Glee and Les Misérables, breaking into song is once again en vogue.

One local group that never thought it went out of style in the first place is North Country Community Theatre (NCCT). Incorporated and based in Lebanon, NCCT has been providing the Upper Valley with opportunities not just to see musical theater, but to be a part of it on stage and behind the scenes for 40 years.

Since their very first production of The Music Man at the Lebanon Opera House in 1973, locals have been performing on stage, directing, producing, playing in the orchestra, working backstage, ushering, organizing the front of the house, providing food and support for exhausted actors, and donating their time and money to all aspects of the theater. Quite an impressive feat considering that most of this is done by volunteers. 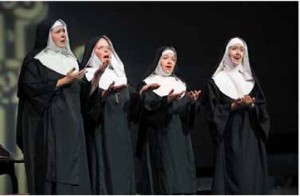 Today, NCCT offers not only the typical community theater summer musical, but also a teen show in the winter, theater classes for all ages, costume rentals, and other performances throughout the year whenever the interest arises.

Hal Sheeler, Lebanon resident and music director for numerous NCCT shows including the upcoming production of Rent, extolled, “The singers, actors, dancers, board, production staff, crews, and orchestra members have, through their extraordinary enthusiasm and dedication to excellence, put on one magical show after another. The Upper Valley is indeed blessed to have NCCT and the magnificent Lebanon Opera House where most shows are staged.

”Just as any good musical has unexpected plot twists, so does real life. In 2011, NCCT’s costume shop was completely flooded during Hurricane Irene. The majority of their props, sets, costumes, and archives were destroyed. But “The show must go on!” An amazing cadre of volunteers stepped in to clean up and move what was left, and now NCCT enjoys sharing a space in downtown Lebanon’s Whippleplace with Revels North.

Tina Kimball, who knew nothing about NCCT when she responded to a friend’s message requesting flood clean-up help, found that, “Because of the amazing people I met that weekend, I wanted to become a part of this incredible organization.” Since then, the Lebanon resident has costumed several shows, joined the board, and taken on the role of costume shop manager. She has restocked the costume shop and is ready to rent its inventory, including tuxedos and ball gowns, to organizations or individuals.

Recent Lebanon High School graduate Alleigh Whiteside, center, is Maria surrounded by the von Trapp family in the summer production of The Sound of Music.

NCCT’s next production, Rent, plays at Pentangle Theater in Woodstock, Vermont, from December 5 to 8. With the show set in the early days of the AIDS epidemic and with World AIDS day falling on December 1, NCCT is partnering with the HIV/HCV Resource Center in Lebanon to help support those whose lives are affected by HIV/AIDS and Hepatitis C. They are raising money by giving red ribbons in exchange for donations at their performances and at local businesses.

Every winter for the last 20 years, more than 60 students from area high schools, supported by their families, participate in a musical production just for teens. They put together every aspect of the production, from choosing the show to hiring the production staff, and organizing fundraisers throughout the year.

“A local teacher told me she loved our program because it was one of the few activities where high-schoolers from different schools create something together rather than competing against each other,” said this article’s author, Lebanon resident Amy Fortier, president of NCCT and a teen advisor. “These kids are amazing – talented, intelligent, and accepting of everyone. I’m jealous that I didn’t have this opportunity when I was their age.”

They are also incredibly committed, rehearsing up to three days a week and giving up their entire February vacation to rehearse daily from noon until 9 p.m., sometimes longer. Their next production, Seussical: The Musical, plays at the Lebanon Opera House (LOH) in February 28 and March. Auditions, open to all high school students, will be at LOH on January 4.

Children don’t have to wait until they are in high school to participate in theater activities. NCCT also offers theater classes for all ages through their Educational Theater Company (ETC).

“Our classes are a great way to explore theater performance in a safe and fun environment. Theater naturally lends itself to developing skills that are applicable on and offstage, like collaboration, confidence, and communication,” said Mary Gaetz, director of ETC.

ETC programs in Lebanon have included partnering with the Recreation and Parks Department for summer camp and leasing classroom space in AVA Gallery and Raq-On Studio.

NCCT will always be grateful to the hundreds of people who have contributed their time, enthusiasm, energy, talent, and financial support over the years – without them NCCT would not exist. To learn more, visit ncct.org or find NCCT on Facebook.