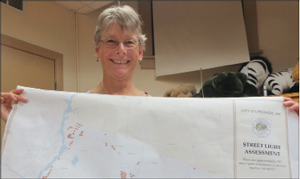 About four years ago, Barbara Hirai, chair of the Lebanon Energy Advisory Committee (LEAC), walked the streets of Lebanon counting streetlights. The existing maps of the network of lights weren’t matching, and she was looking to get an accurate record. Determined, she set out to map every streetlight in Lebanon and make sure that each one was where it should be. What she found surprised her.

“Some lights just weren’t there anymore,” she told me during a LEAC meeting one October evening. What had happened was that, while the city maintained streetlights, removing or moving some when needed, the official count of the streetlights wasn’t updated. They were being billed for streetlights that had been gone for years. “We saved around $5,000 removing those energy costs,” she said, proud of just one of many successful missions LEAC has embarked on to make Lebanon a more sustainable city.

Four years later, Hirai is still on a mission to make Lebanon’s streetlight placement more economical and efficient. She wonders at all the times one stands on a residential city street and asks, “Why isn’t there a light here?” Or when, up in the depths of the Blueberry Hill woods, a single streetlight stands illuminating an empty and less frequently used street.

She showed me this on a map of Lebanon, where there were massive clusters of lights in concentrated areas, like around Colburn Park, and significant gaps around neighborhoods like King’s Grant in West Lebanon. LEAC hopes to develop a multi-pronged system to standardize streetlight placement, with differing criteria in regions as disparate as Lebanon’s in-town and rural neighborhoods. By maximizing the utility of more purposefully placed lights, Lebanon can cut down on both costs and wasteful energy usage.

LEAC is also pushing for the lights themselves to be more efficient. In conjunction with support from the Lebanon police and fire departments, and the Lebanon Planning Committee, they are evaluating options for LED lighting for the parking lots and mall in downtown Lebanon.

LED municipal lighting can cut energy costs by 50-80% and offer financial incentives that can cover the original installation costs. Clifton Below, a LEAC member and former state senator, shared multiple options for cost-cutting LED uses, including products that dim around midnight to reduce unneeded energy use, and “acorn-style” lamps that would provide the mall with warm, inviting, and safe lighting at a fraction of the energy cost. LEAC is currently exploring options for short-term demonstrations of various models of LED lights to evaluate each option’s lighting pattern, effectiveness, and visual appeal.

Several municipal properties are similarly equipped to be energy efficient, with the added benefit of reducing the impact of those energy costs on taxpayers. The Kilton Library in West Lebanon was designed to include many energy-saving features in order to make it a “green building.”

Library Director Sean Fleming spoke to me about Kilton’s geothermal heating and cooling unit. With wells oriented 450-feet deep in the ground, it uses the natural heat of the earth to adjust the temperature of water in a closed system. This means that cool water is used to battle the summer heat, and heat pumps are used to circulate warmer water in the winter.

Fleming is extremely happy with the results. He reports that at current rates, the system is “reliable” and operates at “a fraction of the cost of using oil or propane.” It has also acquired the library prestige; it was the only LEED Gold-certified library in New Hampshire upon its opening, awarded because of the extent of environmentally conscious features included in its design.

Schools in Lebanon’s district also include energy-efficient features. Both the Lebanon Middle School and Mount Lebanon School use biomass pellet stoves for heating, which utilize a local and renewable energy source. LMS also features a hot water solar system for the summer months when there is not enough hot water demand to warrant keeping the pellet stove in operation.

With the use of biomass fuel pellets, fuel costs have been $18,000 to $20,000 annually versus a previous total of $35,000. Other features of LMS’ green design include a rainwater collection system for the school’s low-flow toilets, zoned fluorescent indoor lighting on sensors, and timed LED exterior lighting that adjusts based on lighting conditions.

Another member of LEAC, Lebanon Solid Waste Manager George Murray, took me on a tour of his landfill to discuss planned efficiency projects there. The landfill uses a system of 12 pumps and four lines of drainage tubes to collect material including methane gas. Methane gas is about 21 times more harmful as a greenhouse gas than carbon dioxide, according to the EPA, and about 18.2% of the nation’s methane emissions came from landfills in 2012. The Lebanon landfill currently flares, or burns, its collected methane emissions.

After we surveyed the most recent “cell” of the landfill, where crews compact, place, and cover incoming trash, Murray showed me the spot where a proposed electric generator would be placed. This generator would convert the gas into about 1.6 megawatts of electricity monthly. Murray said there is a possibility that the gas could instead be captured and sold locally, reducing loss, capping harmful emissions, and increasing use of domestic fuel.

Apart from improving the city’s own energy usage, part of LEAC’s mission is to reach out to Lebanon residents to encourage more sustainable living. They plan to apply to the Solarize Upper Valley program, coordinated by local nonprofit Vital Communities. Under the program, volunteers in each participating municipality competitively select an installer of solar equipment who offers special pricing for local residents who sign contracts to go solar by the program’s deadline. The goal is to make going solar simpler and more affordable by doing it together.

During the 15-week Solarize outreach campaign, the volunteers and installer would work together to host solar workshops and demonstrations, tours of properties with solar panels, and other efforts to help residents “go solar” before the deadline. The more residents that sign contracts to go solar with the partner installer, the lower the price drops for everyone, creating a growing incentive as the program continues. Additional incentives include the long-term energy savings of the solar systems, a state rebate of $0.75 per watt of electricity used, and a federal 30% tax credit on residential and commercial solar systems continuing through 2016.

The Solarize program has already had success in five Upper Valley towns – including Cornish, Plainfield, and Lyme – and campaigns are currently active in 10 additional towns, including Hanover. During the first round of the program, which ended June 30, 120 homeowners signed contracts to go solar, adding a total of 638 kilowatts of renewable energy capacity to the region. In each of the communities, enough residents signed on to reach the lowest cost tier for their respective program.
LEAC is doing the initial groundwork so that Lebanon may join the third round of Solarize Upper Valley in 2015.

The sustainable measures LEAC promotes save Lebanon residents money as much as they reduce their environmental footprint. In October, LEAC agreed to host programs to discuss alternative heating systems for the coming winter. The electric provider for much of Lebanon is raising its rates from 7.73¢ to 15.4¢ per kilowatt hour due to strain on the natural gas pipeline fueling its power plants. The average electric customer in Lebanon can expect a total cost increase of about 47%. For those who have electricity-resistance heating systems, this rate increase might prove too costly.

Luckily, there are ways to both make the necessary cost cuts and reduce a resident’s environmental impact – and LEAC is here to help residents understand their options. Below highlighted one such measure, a heating system called an air-source heat pump. 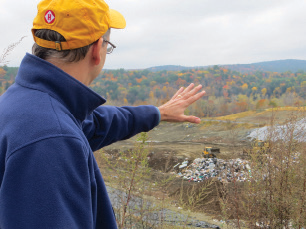 The author’s father takes in the view of the landfill, where a proposed electric generator would turn harmful methane gas into energy.

“It’s like how a refrigerator keeps cold,” he explained. “It draws heat from the outside cold air and compresses it in a series of coils, eventually releasing it inside the house as heat.” It is a far more efficient way to get the same amount of heat, he said, as it uses “about a half to a third as much electricity” as a resistance-based heater. In combination with other sustainable, low-electricity home adjustments, and the potential for on-bill financing to pay back the initial installation costs, Below predicted that residents could “reverse the effects of the rate increase.” LEAC is looking for opportunities to provide more workshops for renewable appliances like the heat pump in the near future.

In ways like these, LEAC and the city of Lebanon have been successful in empowering residents to take the environment into their own hands. Just two years ago, they passed a vote to allow more residential ownership of chickens so that residents could reap poultry’s benefits right in their own backyard. There are people working behind the scenes to shape our city toward a more sustainable future, even if that future comes from our trash or is hatched from a local chicken’s egg.