Living in the north as we do, where winters are long and, shall we say, a tad frosty, a body needs a compelling reason to get outside and recreate. When the temperature dips into the low 20s for days on end, Storrs Hill Ski Area in Lebanon becomes a winter sports lover’s paradise.

Occupying a place of honor in the middle of the city since the early 1930s, Storrs Hill is one of a handful of small ski areas in the East run almost entirely by volunteers.

“You could sum it up as only one paid employee, that’s our hill manager, from November through April. We give a few small stipends to some of our program directors, but other than that it’s all volunteer,” explained Todd Caruso, the treasurer of the Lebanon Outing Club (LOC) which operates the hill. 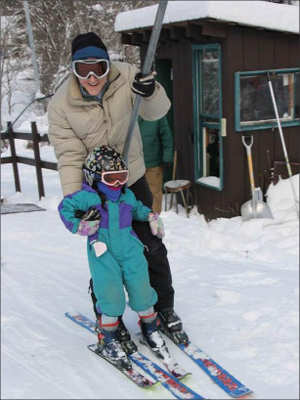 The inspiration for Storrs Hill Ski Area was Norwegian transplant Erling Heistad, Sr., who had a vision that every child in Lebanon should be within walking distance of a ski jump. His vision resulted in more than a dozen ski jumps of all sizes scattered throughout New England, many of them in Lebanon. Heistad coached the Lebanon High School ski team, which won nine consecutive state championships, and was a ski jumping judge for the 1960 Winter Olympics. After a lifetime of promoting outdoor activity and winter sports, Heistad was inducted into the U.S. Ski Hall of Fame in 1966.

Heistad’s legacy and vision has been carried on by volunteers of the Lebanon Outing Club, producing several Olympic ski jumpers and thousands of new skiers and snowboarders, most recently Lebanon’s own Nick Alexander, a two-time Olympic ski jumper.

Fast forward to the early ’80s when the hill was operated by the City of Lebanon Recreation Department on a shoestring budget of $14,000 and a handful of volunteers. When a request to increase the budget was declined by the City Council, the future of the hill was in jeopardy. Jon Farnham, current hill manager and head ski jumping coach, recalls, “When the city announced it was going to end funding and close the hill in 1986, the Lebanon Outing Club took over.”

But the City has remained positively involved over the years, providing annual funding support and low-interest loans for a snowmaking system and a new lodge. The club has funded other improvements, including a rehab of the 50-meter ski jump and judges stand, new lights for night skiing, and lift repairs.

Volunteers are involved in every aspect of the operation, from highly technical snow groomer, diesel engine, and snow making equipment repair to redesigning the concession menu to offer healthy choices. “We try to stretch the volunteer hours,” says Caruso.

With the philosophy ‘skiing doesn’t have to be expensive,’ Storrs Hill is now a seven-day-a-week operation with a $90,000 budget and more than 70 volunteers, according to Farnham. The hill is also supported by the Carter Witherell Fund, ticket sales, and a concession stand. 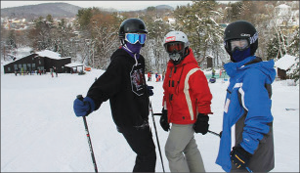 “More young people are coming to use the hill and volunteer,” says Farnham. “We’re seeing a resurgence in volunteers, and some third- and fourth-generation skiers. Folks who grew up here are coming back.”

Current LOC President Cory Grant is one example of someone who learned to ski at Storrs Hill and is now giving back in a leadership role.

Longstanding traditions at Storrs Hill give the community a fun way to get involved as well. The annual Mud Meet crowns the “Skimeister of Lebanon and the World” with awards in ski jumping, Nordic skiing, and downhill racing. The hill will again host the Lebanon Recreation Department’s Half Moon Valentine’s Fiesta in 2015, with food from area vendors on the deck and snowshoe hikes to a hot chocolate station at the signature lighted star on the top of the hill. For the recent Halloween holiday, the club offered “Haunted Hill,” a tour through the lodge featuring Halloween creatures and treats. Future plans involve games and craft activities at the lodge.

But it’s the hill’s ski jumping legacy that has put Storrs Hill on the map nationally and internationally. When ski jumps around the country began falling apart from lack of use, Storrs Hill, neighboring Dartmouth College Outing Club, a few prep schools, and the State of New Hampshire Interscholastic Athletic Association hung on. In 1981, when the NCAA dropped ski jumping as a college sport, athletes who wanted to become ski jumpers went directly into international competition, without the benefit of college and high school experience, except in New Hampshire.

New Hampshire is currently the only state in the country that still offers ski jumping as a high school sport. Local and regional athletes can learn to jump at a reasonable cost before having to pay their way to compete internationally. While Dartmouth’s jump was torn down in 1993, the Storrs Hill jumping program has continued with its 5, 25, and 50 meter jumps.

The zenith of the hill’s accolades came in 2006, when Storrs Hill hosted the Junior Olympic Ski Jumping competition. At the time, the jumps were open for year-round use with plastic covering salvaged from the Olympic jumps in Lake Placid, but recent flooding has caused too much damage to the material. Plans are underway for fundraising to restore the year-round jumping operation.

If recreational skiing is your preference, the public skiing experience is alive and well at Storrs Hill. Operating Friday nighst and Saturday and Sunday afternoons, Storrs Hill is the kind of place you can go with your family and keep an eye on young skiers while they explore their independence in a family-style atmosphere. From lift and lodge attendants to ski patrollers, the caring and competent staff wants everyone to have a positive winter sports experience on the hill.

So when mid-January arrives in Lebanon and the chill is on, check out Storrs Hill. You can still get a free season pass if you volunteer one shift a week, either indoors or out. With a ticket price that tops out at $7 for youth and $10 for adults, it’s pretty much the best deal around if you want to learn to ski, jump, snowboard, telemark, or just get some fun runs in with your friends and family on a cool winter’s night.