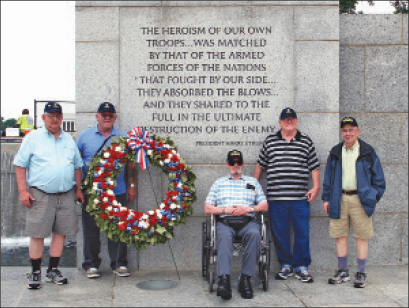 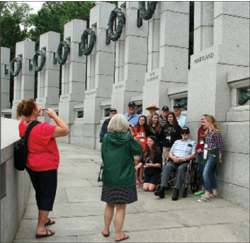 “Fellow Quail Hollow resident Philip Diana first came up with the concept, and I kind of took over in midstream,” Kenison explained. “I realized that perhaps in many ways we were running out of time to pull this off. Three years ago there were about 100 veterans that I knew who lived here at one time and now that number is down to 30 or so. Many of those would not be able to make such a trip due to age and health concerns. We had our work cut out for us, that’s for sure.”

During 2013 the fund raising efforts got underway in earnest. With the permission of Quail Hollow management, the group hosted what turned out to be extremely popular and delicious breakfasts in the community’s dining facilities, along with a lively barbeque on the outdoor terrace during the height of summer. Private donations were received, merchants donated items to be raffled, and fellow residents contributed homemade crafts. Slowly but surely, the financial goal was achieved.

Following a rousing send-off by their fellow Quail Hollow residents, on May 27 five proud veterans ranging in age from 73 to 82 boarded the Ethan Allen Express at the Amtrak Station in Rutland, Vt., bound for Washington, D.C.: Two Korean War veterans, two U.S. Army, and one Air Force veteran were headed for our nation’s capital with wide smiles across their faces. 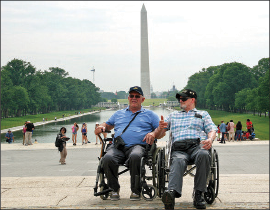 Was all the hard work and the enthusiastic support from the Quail Hollow seniors worth the effort? Perhaps one single touching moment out of many summed up the entire experience for all involved.

The day of the monument tour it was brutally hot in Washington, with a burning, hazy sun overhead and the temperature hovering around 90 degrees and humidity at 80 percent. Seventy-six-year-old Korean War veteran Sandy Nash, originally from Acworth, New Hampshire, was being pushed in his wheelchair with his leg prosthesis laying on his lap for comfort. Perched on his head was the black baseball cap all were given with two words emblazoned across the front: Korean Veteran.

The intrepid group had decided before they visited the Tomb of the Unknown Soldier they would spend time under a welcome nearby shade tree. There they encountered a tour group, and one of the ladies remarked about the sheer beauty and tranquility of the adjacent Arlington National Cemetery. It was awe inspiring. Nash nodded in agreement. He then looked skyward before bowing his head and, in a very soft voice, uttering, “Yes, and I never thought I would get to see this in my lifetime.” There was a tear in the corner of his eye.

That was just one of countless emotional moments for the Quail Hollow Five. William Scanlon, 82, was another Korean War veteran on the trip who had served in the United States Air Force from 1951-55. He had an encounter that will remain with him for life.

“I really could not believe it when a young boy around seven or eight broke loose from the school group he was touring with and walked over to me. He stood there politely and extended his hand. ‘I want to thank you for your service, Sir,’ he said, and rejoined his group. I was almost in tears,” Scanlon said. 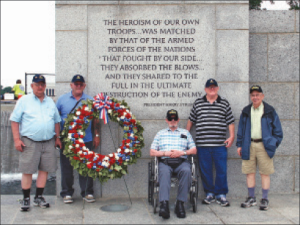 There was also the school group from South Carolina whose teacher approached the Quail Hollow veterans and requested they pose for a photograph with the class. After the cameras stopped clicking they added in unison. “Thank you for your service!”

The accolades didn’t stop there. At the end of that hot, humid day the group assembled in the lounge of the Sheraton Pentagon City Hotel where they were staying. The physically demanding tour called for a round of ice cold daft beers and a toast. One gentleman sitting at the bar announced loudly that the next round was on him and declared, “Thank you for your service gentlemen!”

And there was the high ranking Naval officer attired in her sparkling white dress uniform who passed by the Quail Hollow Five at the Arlington National Cemetery. As she approached, she gave a warm smile, gathered her rigid military bearing, and snapped off an impressive salute.

“Thank you gentlemen. Carry on,” she said.

For all those who worked so diligently to get these veterans to Washington, you can rest assured the effort paid huge dividends. “You can watch all you want on television, but until you get there in person you have no idea what it means. It really hits home,” said Stan Kenison. “It shows you first hand the price you pay to remain a free nation.”

For the Quail Hollow residents that remained behind, their contribution will be forever remembered. Mission Accomplished!