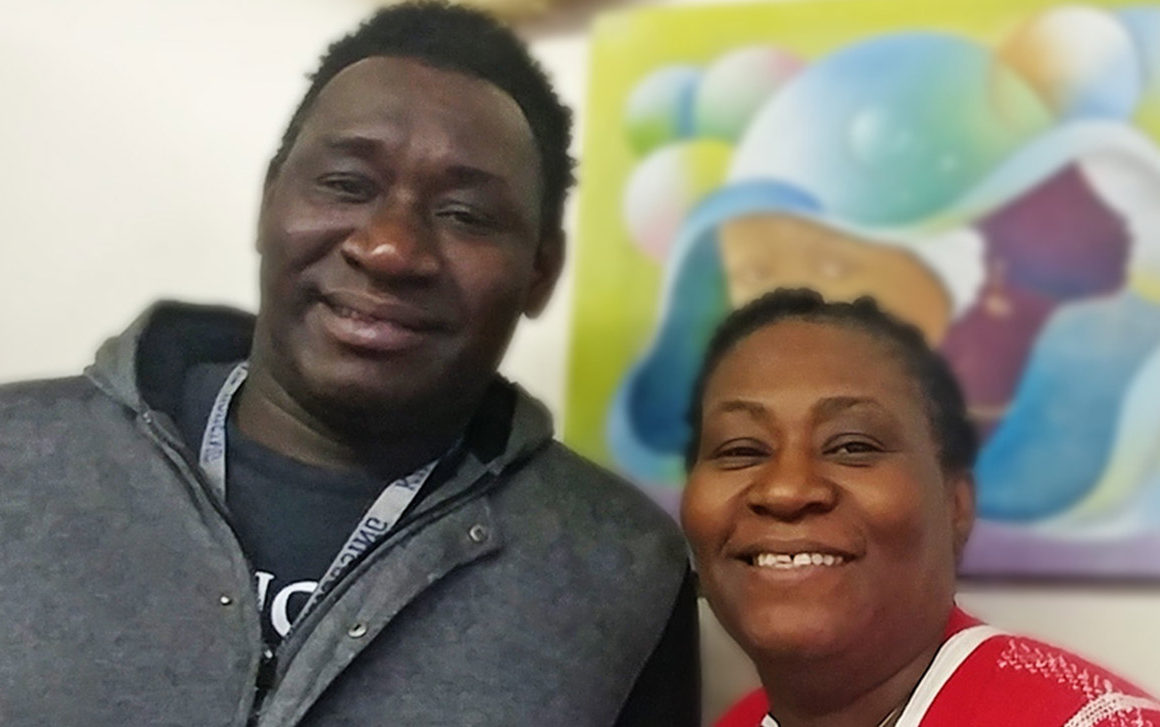 For the past 3 years, Carline Roberge and her husband Balvin have been offering take-out Haitian and Jamaican specialty foods and Haitian art next door to the former Hirsch’s clothing store. Together, they own and operate Karibbean Coffee Shop, sharing delicious authentic Caribbean dishes at the shop and in season at the Lebanon Farmers’ Market. The regularly changing menu takes you clear to the Caribbean with oxtail, curry goat, pork griot (chunks of citrus marinated pork shoulder with Scotch bonnet chiles), and Caribbean beverages and side dishes.

So how did Carline, a native Haitian, and her family land in Lebanon, bringing with them the spicy flavors of the Caribbean? As Carline explains with a laugh, “It’s a long story!” 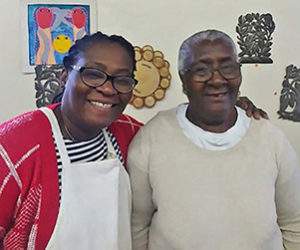 Carline (left) and her mother Clotilde at
Carline’s shop

On a recent sunny morning, Carline and the new owner of the Hirsch’s building, Sam Altaf, explained their respective journeys. Carline met her first husband, New Hampshire native John Roberge, in Haiti while he was doing missionary work. Carline was in nursing school when the couple decided to relocate to New England, and she eventually continued her studies at River Valley Community College in Claremont, graduating in 1997. For a time, Carline worked at Alice Peck Day Hospital before pursuing her dream of having her own food establishment. John has a background in social work and is employed at Headrest in Lebanon, while Balvin and Carline’s brother work locally as well.

Carline learned to prepare Haitian dishes from her parents and Jamaican cuisine from her husband Balvin, so when the couple moved to West Lebanon, she began vending at the Lebanon Farmers’ Market. From the start, it was a family affair, with Carline’s parents and her brother pitching in to help. The Farmers’ Market fare became so popular that customers encouraged Carline to open a shop, and Karibbean Coffee Shop was launched to good reviews. I recently enjoyed some jerk chicken and pork griot over rice – highly recommend!

Carline considers her family and friends her top priorities in life, along with providing support for organi­zations in her native Haiti. For example, proceeds from the sale of artworks and crafts in Karibbean Coffee Shop support tuition payments for Haitian school children, and for purchasing much needed supplies for the general hospital in Haiti. Carline regularly hosts her children’s friends, serving up whatever food fits the bill for the day. “My door is always open for friends and family to visit and share a meal. No appointment needed!”

Speaking Haitian Creole, the dominant language of Haiti, with her relatives keeps her in practice as she travels back and forth to Haiti, and 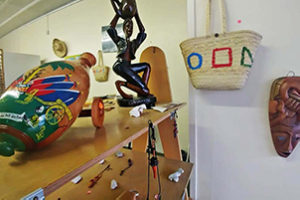 Carline is fluent in English as well. When Carline and John lived in Maine, they arranged for the local hospital to ship needed supplies to a clinic in Haiti. Carline and her son take trips to Haiti so he will learn about his Haitian heritage, and become involved in the Haitian educational system, experiencing both American and Haitian schools.

Culturally, Carline has taken the approach of learning to adapt to the practices and customs of her adopted home. She coaches her children, “This is who you are, be proud of who you are, and learn about where you live.” She recounts a story of walking down a street in the Upper Valley, and being greeted by two men who exclaimed, “Excuse us Miss, but who are you? We never see any black people here!” One of the men, Balvin, would go on to become Carline’s husband.

When she and John parted ways, it was important for them to continue co-parenting their children, and maintain a positive and supportive relationship with each other. As Carline notes, “Why put the children and ourselves through such stress? It’s better to be good friends.”

How does a native Haitian like the New Hampshire winters? Carline and her family enjoy sledding with relatives in northern New Hampshire and she has fallen in love with the clam chowder at the Littleton Diner. Yes, it’s considerably colder than Haiti, but Carline says, “I’m happy, so that’s OK.”

One of Carline’s longtime friends is Sam Altaf, who recently bought the Hirsch’s building. Sam was born in Pakistan and earned a degree in textile engineering in England. After graduating, he was hired by a Canadian woolen mill company to manage a new mill, and was then transferred to Maine to continue operating textile mills throughout the ‘70s and ‘80s, eventually landing in Swanzey at Homestead Woolen Mills. At the height of its operation in the ‘60s, the Homestead employed 350 people.

When the the U.S. textile industry began its decline in the late ‘80s (news reports suggest American companies struggling to compete with China, India, and Pakistan left the U.S. and moved overseas), Sam decided to move to the Upper Valley. Once in town, he founded Carpet King, citing the Upper Valley as a “…vibrant center of commerce, and close to Dartmouth College.” Sam began selling machine loomed carpets from companies in Dalton, Georgia, which now comprise many of the world’s leading carpet manufacturers.

Sam considers owning the Hirsch’s building to be an enjoyable retirement activity. He intends to make improvements to the building to attract additional renters, and Ed Hirsch stops in from time to time to advise both Carline and Sam on how to develop a thriving Upper Valley business.

For her part, Carline is ready to receive customers who yearn for a taste of the Caribbean, and has plans to evolve Karibbean Coffee Shop to a sit down restaurant after making the necessary improvements to pass NH state health regulations, which she says is no small feat. Supported by her family and friends, and served by her commitment to supporting Haitian humanitarian causes and persistent personality, Karibbean Coffee Shop is bound to succeed.

Cindy Heath founded the Lebanon Farmers’ Market while serving as the Director of Parks & Recreation in Lebanon.