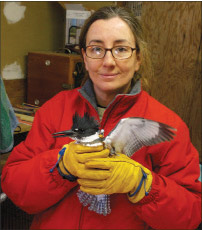 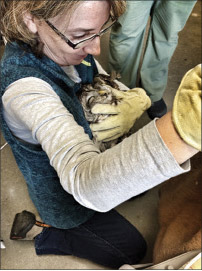 Those of us who have visited or read about wild animal rehabilitation centers generally understand that the people behind the scenes are doing some pretty incredible work. The amount of training these individuals have to undergo in order to be able to care for wild animals is intensive. There is often the dangerous potential for animals to react fearfully if they are not used to humans. There are sad stories that go along with the work, and sometimes it’s hard to let those stories go.

What is often forgotten is the part played by everyday citizens, the ones who take time out of their busy schedules to bring in these injured animals. When I began to write about Saint Francis Wild Bird Hospital in Lyme, NH and the work that Catherine Greenleaf does there, I was focused on her; but when I asked her to tell me her favorite rehabilitation story, it was not about her:

“I think my favorite story has to be the one about Harley, the Broadwing Hawk. His situation shows how kind people can be when they find an injured animal. It was 4th of July weekend several years ago, and a man was riding his Harley Davidson motorcycle, breezing down Rte. 4 in Canaan, and all of a sudden a hawk flew into the front fender of his bike. The man turned just in time to see the hawk get flung across the road and into the bushes.

“He pulled over and stopped and then scooped up the badly injured hawk, and with one hand driving the motorcycle and the other hand holding the hawk, he somehow made it to my bird hospital. Harley had a severe head injury, and it took months for him to recover, but he recovered completely and was released the following spring. That act of kindness on the part of the motorcycle rider is the inspiration that keeps me going in what I do.”

Saint Francis Wild Bird Hospital in Lyme, NH is not necessarily the first wildlife hospital Upper Valley residents think of when they come across an injured bird, but Saint Francis has rescued over 1,400 birds since its inception in 2007. They are also licensed to take snakes and turtles, although Catherine noted that she has yet to have anyone bring in a snake. 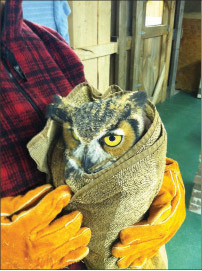 While Catherine and the Saint Francis Wild Bird Hospital continue to save as many birds as possible, and educate people as well, there are birds and other animals everywhere in need. The issue at stake for the future of these wild animals is not just the everyday dangers of cars, traps, windows, and predators, but also that there are not enough wildlife rehabilitators in the larger region. Especially when it comes to young people just starting out or finishing their training.

It’s clear that working with birds is Catherine’s passion, one that gives back almost as much as she puts in. When asked to pick a favorite type of bird to work with she answered:

“It’s really hard to pick a favorite. I would say hawks and owls, ravens and crows, and loons. There’s a kind of holy presence about these birds, about all birds, actually, but these birds in particular for some reason. They are the ultimate in primal wildness; and they exude an intelligence that we as humans have yet to tap into.”