Soothing the Pandemic Soul with the Sound of Music 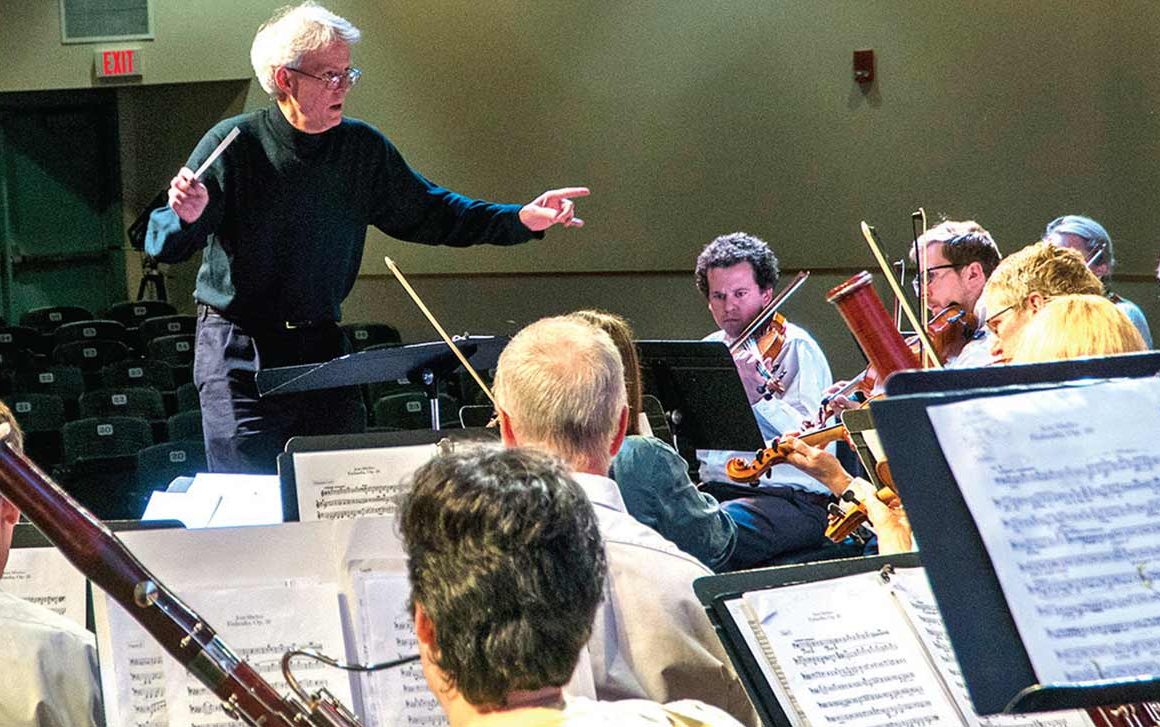 Residents at Wheelock Terrace in Hanover, NH, were in for a special treat in early May when the sounds of brass and woodwinds wafted through the outside air, bringing a fleeting pause to the accompanying distress of the 2020 pandemic.

The music was generated by seven out of over 60 members of the Upper Valley Community Band (UVCB) in the parking lot of the assisted living facility. The musicians, playing instruments including clarinets, trumpet, trombone, and tuba, entertained the residents with polka, waltzes, and ragtime favorites.

“We’re glad we could work with the UVCB to give residents a safe opportunity to spend time outside their homes and enjoy a swing of music therapy in this refreshing outdoor scenery.”

The UVCB usually performs formal concerts at the Lebanon Opera House along with summer parades and seasonal bandstand gigs, but this is one of the few times in a parking lot. UVCB’s executive director, Mark Nelson, related his excitement about the project.

This opportunity “enabled some of us to play together for the first time since quarantine restrictions were imposed,” he noted. “We hadn’t rehearsed since early March.”

In the past, the UVCB has performed on several occasions for the residents of Wheelock Terrace and has offered both summer outdoor concerts there and an indoor concert for the December holidays. Several weeks ago, a small subset of the band gathered at a parking lot in downtown Lebanon to play briefly at an impromptu birthday celebration for one of its senior members.

“The UVCB has also met in a few Zoom conferences during the last month or so,” said Nelson. “These were simply opportunities to stay connected with one another. I’ve initiated a members-introducing-members project whereby members pair up, interview one another, and then introduce their partner to the rest of the band. The weekly two-hour rehearsals of our large group (some 60 players) are intensely focused on music-making; we don’t ordinarily have the luxury of having leisurely conversations with one another. During the pandemic quarantine, we now have time for these; the resulting introductions have been colorful and illuminating.”

Today’s pandemic has generally cut off the livelihood of musicians and composers around the world and has relegated global residents behind locked doors, closed windows, and without social contact except through 21st-century technology.

In response, performances have moved online and from home or even – in parking lots. Determined to offset the virus, people have launched a collective act of social and musical defiance. Windows have been opened, doors unlocked, and thousands rushing to their balconies – to sing. People across the globe have started making music that is deeply rooted in their neurobiology and allows them to attain a kind of interpersonal synchrony that drives them together.

As the conductor of the Upper Valley Chamber Orchestra (UVCO) that has had four Zoom conferences of late, Nelson is intrinsically involved in opening those musical doors and windows in a myriad of ways.

“These seminars have afforded us the opportunity to consider elements of history, aesthetics, structure and narrative – all of which I mention in rehearsal, though in less depth than has been possible during these recent meetings,” said Nelson. “I think it’s fair to say that these presentations have given orchestra members a chance to deepen their understanding in ways that complement our rehearsal process.”

Zoom conferences are also an effective way of “seeing” one another, Nelson noted. In his directing of his a cappella chorus, for instance, he has been leading sectional and full-ensemble rehearsals via Zoom conference. Group members have been concentrating on learning the individual parts of their songs because the technology doesn’t enable them to hear their ensemble sound at all.

“I mute everyone but myself,” said Nelson. “I play audio files of the songs which are mixed to highlight a single part (soprano-alto-tenor-bass). I highlight and review potential trouble spots. Although we miss hearing our ensemble sound, this has been a relatively efficient method for learning the parts.”

But Nelson isn’t satisfied with just online access to bring people together via his music. Inspired by one of his Upper Valley Music Center colleagues who works with young children, Nelson is currently talking to the orchestra about the possibility of driving to the homes of each player, setting up a music stand and orchestral score at the end of the driveway, having them set up with their instrument outside, popping a CD of one of their pieces in his car stereo, and asking his colleagues to play while he conducts in a kind of Music Minus One scenario.

“For me, the recent phenomenon of Zoom-facilitated recordings is getting tiresome and frustrating,” said Nelson. “These performances may technically be impressive but they lack the dynamism, the synergy, of real-time performances, and their audio fidelity is generally poor. I yearn to hear some people actually playing their instruments!”

Perhaps ironically, it is the spring of 2020 but it is also the summer of 1576 when the plague of Saint Charles devastated the Italian north, killing tens of thousands who sang their way through the disease. The same resulted in a rhyme that arose from the medieval Bubonic Plague: Ring Around the Rosie. A symptom of the plague was a rosy rash and posies of herbs were carried as protection and to ward off the smell of the disease and potential death – ashes, ashes we all fall down….

Johann Sebastian Bach wrote his Cantata No.25 after the great plague in Marseilles, France in 1723; The Influenza Blues was written during the 1918 Spanish Flu pandemic; and John Corigliano composed his Symphony No.1 referred to as the AIDS Symphony after the modern plague of the 1980s.

Nelson and his band members, as it turns out, are following the footsteps of many musicians over the centuries. Their response to the anguish of the pandemic is to bring people together to improve their emotional state and to enhance their sense of social cohesion.

In this time of adversity, he and the UVCB members hope to create art that will reach people in order to have some kind of cathartic healing – whether the music refers to ancient plagues or modern pandemics.

« Previous post
These Times: A Tribute to Donnie Perkins
Next post »
Senior Citizens Bond to Face Fears During the Pandemic