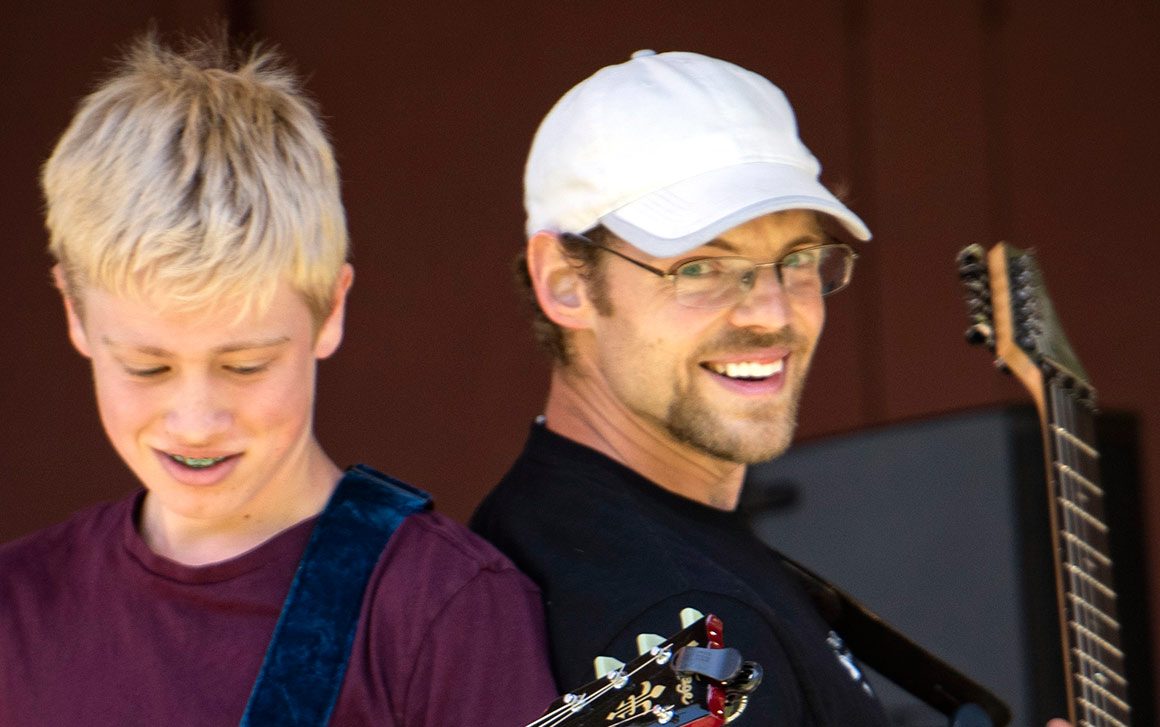 In summer of 2021, the Lebanon Times attended an inspiring concert on the Lebanon green featuring one of the Tuck’s Rock Dojo bands, a mix of talented high- school and college-age musicians and their high-energy teacher, Tuck Stocking. The singer’s powerful and emotional voice and the driving rhythms and melodies of the instruments playing classic rock songs inspired dancing and jubilee in the crowds. Let’s explore the secrets to creating such passionate and skilled music.

Tuck Stocking and Kata Sasvari, a husband-wife team, started Tuck’s Rock Dojo back in 2009. Tuck has a longtime love of many types of music. He has toured in the past with successful bands such as the Conniption Fits and has been teaching music ever since he found, at 16, that he had a talent for explaining music to others. Later, after working for the former Upper Valley Events Center and Upper Valley Rock School, he wanted to start his own music school. His wife Kata joined him as logistics and communication manager.

Kata had not been exposed to much music growing up, but now became immersed in that world. She not only fell in love with Tuck, but also with “how he is with the kids and teaching and playing music.”

Tuck’s students love working with him. From the beginning he puts a priority on them enjoying the music. While many students need to start by learning some basics, Tuck soon helps them learn genres and songs of their choice.

“It’s been awesome because he’s a really great teacher,” said Henry Souza, a seventh grader who plays drums and guitar. “Instead of just playing normal beats, or playing scales for guitar, you get to choose what you want to do, like learn a new song.”

Tuck finds ways to quickly connect with his students’ unique musical interests. For example, he said, “If you find out what band they like, then you can think about what the songs are in that band’s catalog? And which one would be easily done so they have a positive sort of first impression?”

Brian Cavanaugh, a guitar student of Tuck’s from Lebanon, appreciates Tuck’s talent and ability to figure out songs. “If you want to work on a song, just say, ‘I’ve been listening to this song, I and was wondering how this works,’” Brian said. “I’d never seen a song that he couldn’t transcribe. He just listens to it, figures it out, writes it down and teaches you right there on the spot, and so that’s super amazing.”

Tuck’s Rock Dojo band members all have the chance to choose songs thanks to Tuck’s teaching style. Tuck helps spark enthusiasm for songs, too. Will McGee, a high school junior from Lebanon who is a guitarist in one of the Tuck’s Rock Dojo bands, has found it helpful that Tuck will “show people little interesting pieces that’ll keep them interested in the song and keep them wanting to play.”

Tuck’s openness to playing a variety of music with students follows naturally from the passion he has developed for many types of music. As a 13-year-old, Tuck was drawn to video game music of the ’90s. A history teacher started giving him cassettes with other types of music such as flamenco and blues. Tuck found musical exploration exciting and became thirsty to keep learning more.

Tuck builds strong connections with a variety of students, which in turn also helps with musical learning. The mother of one student who is on the autism spectrum said that her son gets distracted easily and that Tuck is very patient and helps bring him back to the task at hand while keeping the lesson fun. She said, “I think it was [due to] his connection with Tuck that he could go from not being able to focus to doing a song.”

Being aware of his own learning style as a developing teacher helped Tuck to realize that people absorb information in lots of different ways. He saw himself as a visual learner and found himself getting better at learning music by ear. So, he figured out that he would need to adjust his communication with students according to their ways of learning, such as how analytical vs. intuitive they wanted to be and their desired musical approach.

For Brian, music is largely about creative expression, and Tuck has helped him with the various tools that go into creating music. Understanding music created by other people is one piece of this. Brian has been working on recording ambient, “mood” music, and sometimes he will ask Tuck questions such as how Eric Clapton made a song sound sad with all major chords, and Tuck can explain the music theory behind that.

Una DiGeorge, a high school senior from Lyme, got into songwriting on her own during the pandemic and now finds finishing and recording songs with Tuck to be “a really special thing we do together.” She’ll usually come in with ideas such as a melody and chords, trying to figure out how to put everything together into a song. Una said, “Tuck can read my mind and be like, ‘Okay, I know!’” and they’ll complete the song.

Tuck was initially driven to start the band program when a student was having trouble finding others to play with; Tuck had 40 or 50 other lesson students, so he thought that he could help musicians meet.

Una finds Tuck to be helpful in lots of ways as a band teacher. In addition to being patient, he has a great ear for finding things students need to work on, while doing so in a way that leaves them feeling comfortable, and free to ask questions and make mistakes.

Tuck’s Rock Dojo band performances often inspire musical students to get into the band program themselves. Cassidy Adams, a high school senior from Lebanon who is now a bass player in one of the bands, said that “Just taking lessons at Tuck’s you become part of the community.” She watched a concert back when she was taking lessons and “there were kids my age playing in a band on stage. I thought that was the coolest thing ever. So, I definitely wanted to try that.”

Cassidy said of the band program, “I am glad we have this opportunity here because I don’t know if I would have been able to play with other people if Tuck’s wasn’t right in our neighborhood. Just because even when we sometimes get a group of shy kids, we still play together.”

The work Kata does behind the scenes is also essential to bringing everyone together at Tuck’s Rock Dojo. Brian said of Tuck and Kata, “They have a really great team because Tuck just focuses on the music, and then she [Kata] takes care of all the business.” Kata does everything from rescheduling to sending invoices to setting up events at various local venues.

What’s on the horizon for Tuck, Kata, and these musicians? Una wants to write more songs with Tuck and has been inspired by him to pursue a career in music. Cassidy is also excited to keep playing music at the Dojo for as long as possible before she heads off for a gap year at boarding school. Many others are still somewhere in the middle of their musical journeys at the Dojo. We look forward to seeing where musical exploration takes Tuck and his students in the future.