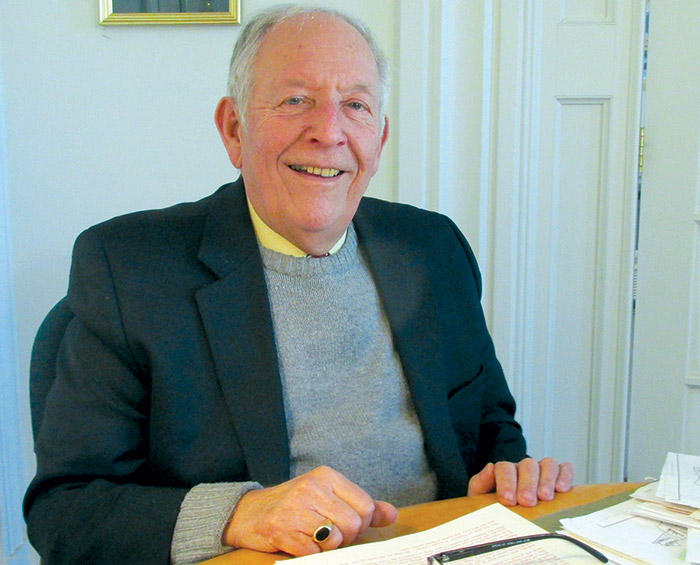 I sat down recently with Paul Boucher, President of the Lebanon Chamber of Commerce, who spoke at length about his 17 years at the “helm.” But, the first thing he said was startling! “When I retire in June, I hope the next president has as much passion for the job as I feel I had!” I guess we assumed he would be at the helm for a very long time. However, even though retirement was looming, his heart, mind, and energy were still very enthusiastically engaged with Chamber activities.

First, he wanted us to understand the solid foundation upon which the Chamber had been built and how it remains strong today.

On February 23, 1917, the first Annual Meeting of the Lebanon Chamber of Commerce was held in the courtroom with 75 members present. Frank U. Bell was the first president.

Paul Boucher was president during 1985-86, the 70th year of the Chamber. He presided over the Annual Meeting at which he commented on much of the history and the people who had been part of it. Many past presidents were at this celebration, among them being Don Ross, Jim Canto, Clark Griffiths, Tom Bascetta, Terri Dudley, Lloyd Bennett and Barry Schuster.

Norris Cotton, a prominent figure who was president of the Chamber from 1940 to 1941, and also a lawyer, became a US Senator in 1946. During his over-50-year membership in the Chamber, much was accomplished. One major event was a Chamber-sponsored reception in the Lower Town Hall honoring him, with more than 600 people attending, including Governor Charles Dale and many other dignitaries. Senator Cotton was made a lifetime member of the Chamber. 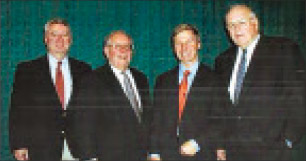 In 1946, President George F. Richardson, Jr., worked hard to gain bus service between Lebanon and Enfield, to serve the Mascoma Lake area during the summer resort season. Membership of the Chamber was 204 that year, and dues were either $5 or $10 a year, depending on the size of the business! But Richardson recommended that dues be raised to $25-$30 per year as those in Claremont.

During 1964-1968, there was much trial – and pain – for the Chamber: the fire in 1964, the building of I-89, and much growth, all of which contributed to the challenges of the presidents during that time which included Ben Hirsch, Ken Murphy, Brad Alden, and Gordon Sargent. President Hirsch  started the system which overlapped terms for Directors, which is still used.

Another building block laid by President Jim Canto (1978) was that the Chamber must have a fixed office and director to properly serve the community. Canto also hatched the idea of the Home and Trade Show, first held at the Sheraton in West Lebanon.

Paul and his wife Karen came to Lebanon in 1971 from Claremont where he worked at the Indian Head Bank. His association with the Chamber began in 1979 while working at the National Bank of Lebanon (now Citizens) – 37 years ago! He became a member of the Chamber Board and was elected President from 1985-1986. 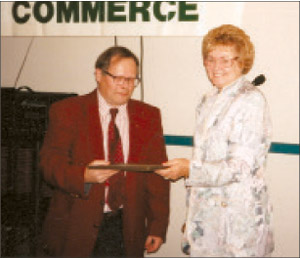 Jim Wechsler, Executive Director, presenting the Citizen of the Year award to Terri Dudley in 1994

In 1999, he was elected as the first full-time Director of the Chamber, and after 17 years of constant service, now operates under the title of President and CEO.

I asked Mr. Boucher how the Chamber has managed to last for 100 years. He said, “Continuity and dedicated Directors and Presidents. For example, Matt Brown served for 27 years, and Debbie Carter for 18. Jim Wechsler served for 22 years as Director, and I have now served for 17 years. Only two people in the State have served longer: Tim Sink of Concord’s Chamber with 22 years, and Laura Ring of Rochester Chamber with 33 years.”

Just a few of the many accomplishments that President Boucher has overseen are:

Paul also serves on the Board of the Grafton County Economic Development Council that began in 1997. He is the last of the charter members. The Council provides loans and grant to Lebanon businesses.

In October of 2016, the 100th Annual Meeting will be held and you can bet Paul will have his hand in the planning.

So, when you hear, or ask, the question “What’s in it for me and why should I join the Chamber?”consider all of the following reasons stated by Paul: By joining the Chamber, your business will be:

And, as another service, members are welcome to put their printed materials in the Chamber office for people to pick up. 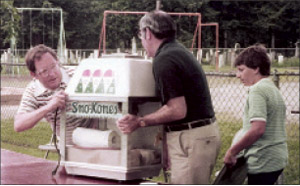 Paul, his son Christopher, 10, and Martin Corcoran, President 1987-88, setting up the Sno Kone equipment during the Bike Race around the downtown area.

The Mission of the Greater Lebanon Chamber of Commerce is: “To continually strive to provide a leadership role through the business community in advocating community growth and economic development while improving a balanced quality of life for the Upper Valley.”

“Show me a community with an active Chamber of Commerce, and I’ll show you a progressive community!” stated Frank Hough, President in 1948, and who often closed his meetings with that statement.

Thus spans one hundred years of uninterrupted service for the Lebanon Chamber of Commerce.

You are welcome to stop in and visit the Chamber at 2 South Park Street, The Willis House, on the corner of South Park and School Street in downtown Lebanon.