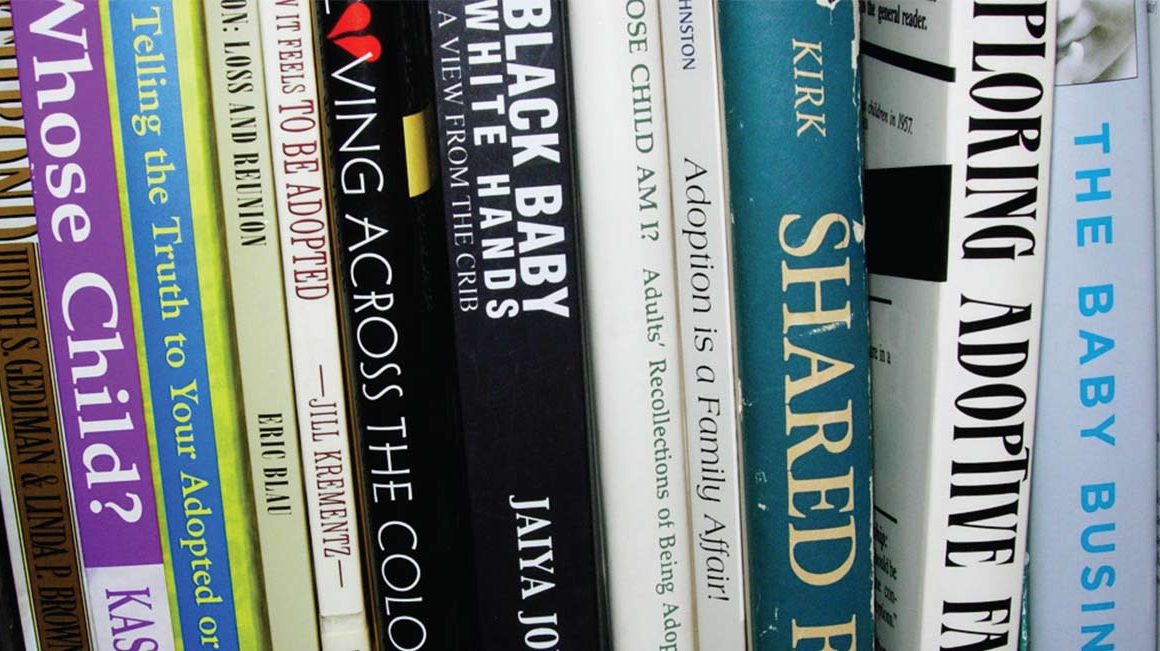 They call it the Triad Group, and think of a three-legged stool. The evolving group consists of about a dozen people, all with some connection to one of the three facets of adoption, whether as birth parent, adoptive parent, or adoptee. Co-founder Judith Bush says support groups usually aim at one, or possibly two, of these facets. “I’ve always wanted a triad group, but I bet you could look and not find one in the whole country,” she says. Titia Ellis of South Pomfret was also enthusiastic about connecting the triad, and helped found the group. “I facilitate the group, but I’m not there as a leader,” says Judith, who is widely respected as an adoption counselor. “For me, this is volunteer work. It’s a joy to see what people learn from one another.” 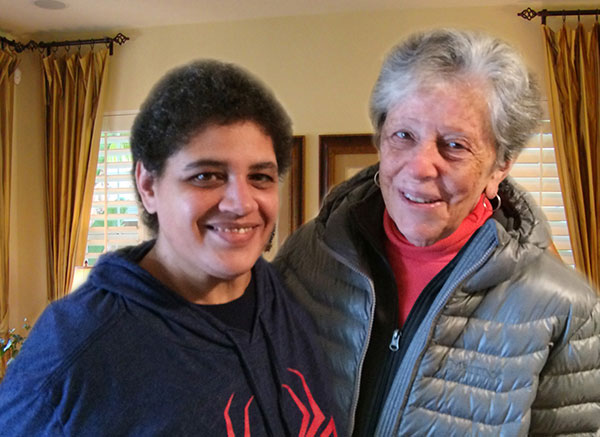 Judith grew up in Brookline, MA, with two older brothers. She moved to the Upper Valley in 1968, when her then-spouse got a job here. Judith was one of the organizers of Hartland’s Cobb Hill co-housing community. She has three grown children, the youngest  being her adopted daughter, Kathy. “People aren’t adopting to save the world. It’s selfish,” she says. “I wanted another child, and I wanted to raise a daughter.” Kathy joined the family at a week old.

About two years ago Judith moved to Lebanon where she’d worked for a number of years with Headstart Follow Through, providing services for K–3 students, and with Casey Family Services. She developed a strong interest in “complex families,” where people are combined through adoption or fostering. Removal from a living parent creates issues different from those faced by blended families.

Triad group members welcome her passion for the issue. “To have a place to go where there’s a truthful conversation is wonderful,” says Jennie Anderson, priest of Norwich’s Episcopal church, who relinquished a child when she was in high school. T—, who with her husband is working through a three-year-long process to adopt children from Haiti, enjoys the group as a way to prepare. She has sparked discussion with the question ‘What would you do differently?’

Hoyt Bingham of South Royalton also finds “It’s a great group, now pretty much new [since she joined], which keeps the conversation fresh. People are mindful of taking time, and Judith is great at orchestrating, making sure others have time to talk.” Hoyt always knew she was adopted, but it was in the days of closed adoption (1930s to mid-1970s), when records were sealed to prevent adoptees from finding their birth parents.

Hoyt grew up moving often. “It was back and forth between Connecticut and Vermont,” she recalls, “sometimes to the same school but a different grade. I feel I didn’t really get an education.” But then she went to Katharine Gibbs secretarial school – “one of the best choices in my life”—and developed a fruitful career. Her parents were always open about her adoption, but, she says, “The connection to my parents was different. Not better, not worse, just different. There’s an umbilical cord connection that I have with my children; I don’t feel like that with my adoptive parents.” 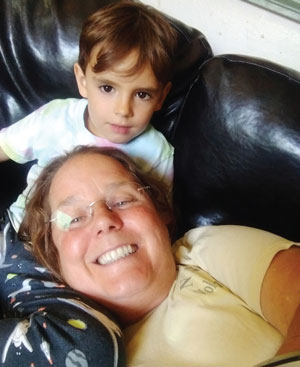 Jennie Anderson with her grandson

Now 56, Hoyt began searching for her birth mother almost 20 years ago, being curious about medical information. And, she says, “I wanted to know if I looked like anyone.” In four months, an unusually short time, she found her birth mother, who was delighted. Hoyt has since become close with that whole branch of her family. “I could feel that my energy was the same as [my birth mother’s],” she says. “I just knew we were related.”

Finding someone who looked like her also motivated Titia Ellis, now 83, to look for her birth mother. Her adoptive parents told her (and her adoptive sister) they were adopted, but they said this was a secret and should never be discussed. Titia grew up with intense fears of not being good enough to be loved, afraid those close to her would abandon her if she caused problems or stood up for herself. Her search for her birth mother was emotionally draining, full of practical difficulties, and tragically timed: she found her birth mother shortly after the mother succumbed to senility. Titia did, however, connect with uncles and half-sisters, and has been warmly accepted. She tells the poignant story in her book The Search.

For many years, there was little in the way of post-adoption support. “People thought, ‘Get the kids adopted and then it’s fine,’” says Judith. “This group is about the long game of adoption. Adoption is a whole layer on top of the wonderful challenge of parenting.” Judith has shepherded her own child through this way of growing up. Research shows, she says, that acknowledging differences without either insisting or rejecting them yields the best outcome for children. “You’re trying to make a child feel special without making a child feel weird,” she explains. When adoptive parents tell the truth, there’s a gradual learning, rather than a moment of revelation. The child’s age and level of curiosity drive the process. Ideally, adopters can be secure enough as parents to welcome differences calmly.

Terry Cioffredi is rearing two adoptive children. She found the group about a year ago. “People dip in and out,” she says. “When things are not going so smoothly I think ‘Gee, I sure could use an evening with Judith Bush.’ Her name is one people trust on adoption issues.” Terry agrees people support you as you adopt. “But as kids get older, adoption issues are not in the forefront any more,” she explains. “When adoption issues [with her teenagers] exploded a bit, I was surprised. For adopted kids, the issue always is ‘How can they be lovable if their own mother gave them away?’ Each transition brings this up again.”

Regarding interracial adoption, Terry notes, “Every person [at the group] will say we truly did not care what color skin our kids have – but our kids do. A word I learned this year is ‘whitewashed,’ about kids of color growing up in middle class white families.” These children don’t have the daily experiences of their racial group: No matter how much social and cultural mentoring their parents arrange for them, the children go home to their white family. It’s hard to see a solution to this issue, though kids have suggested moving to a more racially diverse community. 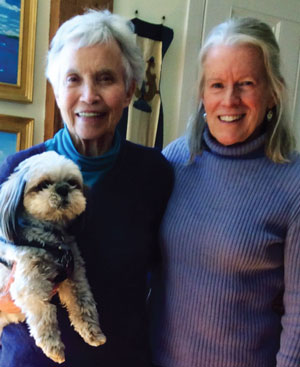 Titia and her sister

Such anecdotes are doubtless hard to hear for those contemplating transracial adoption, like T—. She emphasizes that diversity is a strength, and that not all families are formed biologically. And she knows that facing possible problems is better than flying blindly.

Jennie Anderson was a high school student when she gave up her son. She was well-supported by Catholic Charities (even though she’s an Episcopalian), and very clear about releasing her child for adoption. But about 10 years later, around the time of his birthday, she found herself crying hysterically in the shower and wondering why. “I would get clumsy at work,” she says, “which was a problem because I was working in construction at the time.” She sought for and found her son; his residence in Vermont is one reason she moved to the state.

Jennie has a sign in her kitchen that says, “Birth mothers never forget. Never forget birth mothers.” She’s pleased that open adoptions are now the norm. “They’re much healthier for all concerned,” she says. “Anywhere there’s a secret, there’s a power dynamic. So I’m very open about my birth mother role and how that formed me.”

The Triad Group’s influence may spread. Chris and David spent two years in Lebanon with their son, adopted from foster care. “We’d never had a group we could really learn from. And there was immediate acceptance.” The couple is full of praise for the schools and community they found in Lebanon, but moved back to Rhode Island to be closer to their grown daughters and their son’s birth siblings.

“We were very blessed to find the group,” says Chris. “The interaction with the adult adoptees gave us insight and much needed hope for our son’s future. Maybe we can use this article to discuss expanding our current group.”

« Previous post
Skijoring: A Winter Workout for You and Your Best Friend
Next post »
This Eagle Will Soar