Skijoring: A Winter Workout for You and Your Best Friend 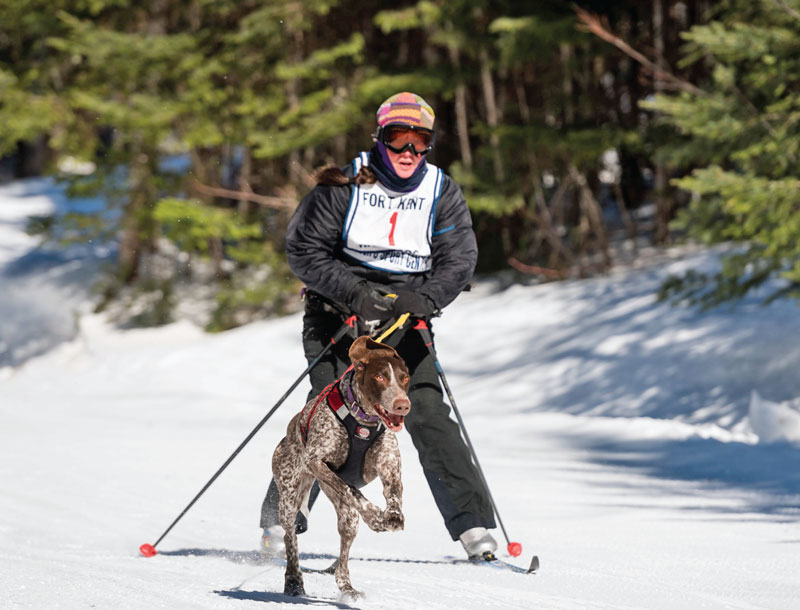 I first heard about skijoring a few years ago. My friend Stevie’s dog Baxter is the kind of dog who loves to run and be out in the snow, and Stevie’s friend wanted to try skijoring. She asked if she could begin with Baxter. Now I never heard how it went – I don’t get to see my friend as often as I’d like – and the idea of skijoring slipped to the back of my mind for a while.

With winter its way; it’s always a fun time of year for outdoor activities with your dogs, and, while thinking about the different things people do, skijoring came to mind again.

But what is skijoring? Possibly you have seen pictures of people on cross country skis with a dog attached, running out in front of them, perhaps you have not. I was lucky enough to speak with Fran Plaisted of Orford, who has qualified for the World Championships in skijoring more than once, about the sport.

Fran began skijoring in the late 1980s. She had always been a skier, but when she got to college, she discovered downhill skiing was unaffordable, so she took up cross-country skiing. Solid cross-country ski skills are necessary for skijoring, and all that ski practice helped when her first dog arrived, and she began to skijor. After that, her ex-husband would also run a team of three or four sled dogs while she would skijor with the remaining one or two from their small kennel.

It’s a fun recreational sport, she noted. “Anything over 30-35 pounds is a skijor dog – well it can be. They have to want to pull, so the ones at the end of the leash, pulling, and the ones that can run by distractions. And that’s probably the hardest part for the recreational person, is teaching your dog that it’s not a leash walk, it’s not your chance to stop on the bush and pee and mark it. You do that before the run, and you do that after you run.”

According to the AKC, skijoring requires little equipment, a dog who weighs enough, a pair of skis, and a harness attaching you to your dog. To race, you need to have a dog who obeys their training and is polite and respectful to other dogs. And petguide.com provides some essential initial tips:

“Practice snowplowing so you can slow down. Also, practice falling down. You will spend lots of time falling in your first attempts, so work on balance to keep from falling down, and to learn how to get up. It is much easier to know you can get back up without an excited dog jumping and barking at you.”

One of the most frequent recommendations is to find people in the area who skijor, too, or places that give lessons. Unfortunately, most of the people Fran meets are not from the area, but, she notes, it would be a great sport to see take off in the Upper Valley. There are so many people who ski, and often with their dogs loose, it’s fun to work with their dogs, too.

Fran trains at various places, frequently at Greens Woodlands in Lyme, as well as Bear Notch Trail and others.

A good way to get started is called Canicross, a new type of dog race where you run cross-country with your dog on a harness, using the same kind of directional commands you use for skijoring and sled-dog racing. Not only are there fun recreational races, but it’s also a good way to start training your dog to skijor.

To skijor, Fran reiterated, the most important thing is excellent cross-country ski skills; otherwise, you’re likely to get hurt, and your dog may no longer want to participate because the more you fall, the more frustrated they get. She, like many resources on the internet, also noted the importance of being able to snowplow and practicing falling.

Fran has bred her dogs, like many skijor racers now do, to be Pointer crosses, often with Husky, although her best dog is a Pointer/Greyhound mix. Pointers have the speed and hard-headedness so many look for, and the Husky improves their feet in the snow.

As I mentioned at the beginning, Fran has qualified for the World Championships more than once, but, until last year she was not able to attend as they were usually held in Europe or Alaska.

Last year, however, Fran, who pointed out that she is in her 50s, qualified again and raced in the Championships, coming in 10th place, as well as the 2nd U.S. placing Team. Racing against the best of the best, including many Europeans who have become very skilled on skate skis, is impressive, and to place so well is incredible. What a journey from skijoring for fun to skijoring as a racer.

Fran would love to encourage interest in the Upper Valley. In the past, she has held clinics with others who are experienced with skijoring, while the interest seemed to wane then, she would be excited to try to pull together a clinic for the Upper Valley area. It would be fun to try a new winter sport this year!