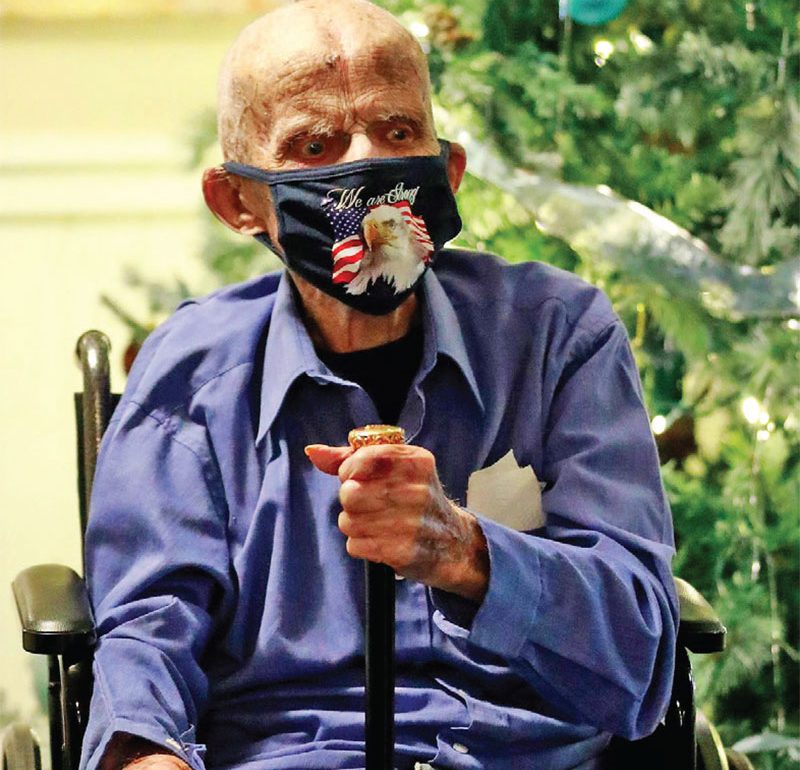 The day following Mr. Chabot’s birthday (Thanksgiving 2020), representatives of the Lebanon Historical Society called upon him at his residence on Lily Lane in the in West Lebanon to present him with the City’s Boston Post Cane in recognition of his becoming the City’s oldest resident.

Chabot was born November 26, 1918 in Paquette, Quebec which borders Pittsburg, NH. He was raised on his family’s dairy farm where he worked until 1936 when he moved to Berlin, NH as an employee of the Brown Paper Company mill for the next 24 years.

The next move brought him to the Upper Valley with his bride, Theresa Dube, whose Berlin family relocated to Hanover, then Lyme and Plainfield. Eugene and Theresa roosted in Hanover, where he landed a job as the baker for Mary Hitchcock Hospital while they began their family in 1948. They were blessed with three children; Delores, Lorraine, and Donald. They crossed town lines to settle on Peabody Street in Lebanon in 1949.

The ever-active Eugene decided he enjoyed mechanical work and commenced working in a series of local Lebanon garages (one was Thompson’s) before being hired by the Town of Hanover’s Highway Department where he worked from 1957 to 1981 and where he retired as a foreman.

What do you do when you’re youthful and active? Well, you walk (at least two miles a day) and grow food, leading him to the obvious solution: go back to farming at Edgewater Farms in Plainfield, a long-time source of the fresh vegetables that kept him healthy. He became a virtual member of the farm family till age 89 when he suffered major loss of eyesight. Several operations didn’t help. Not only did it curb the work in the gardens he so enjoyed, but hunting and fishing were out as was his other hobby of making quilts (some of which were sold in the Edgewater store). He proudly calculates that he made 117 quilts.

In 2012, Eugene and Theresa moved into a senior living apartment where she passed away in 2016. His pleasures in life were reduced to walking and spending time with his family. Slowly, the walking has been curtailed. But, his wonderful sense of humor, friendly banter, and fond memories remain. Heck, he remembers the day he was born – and his mother bundling him up and walking him over to the church to be baptized the next day – and then her going off to work and leaving him to care for a younger sibling when he was six. That’s when he learned to cook – she taught him and he’s loved it ever since.

They can’t take those recollections away. Nor can they remove that of which he is most proud: his US citizenship which he earned back in 1968. And that wonderful sense of humor.

“Did you ever stray across the border into the USA before you became a citizen?” “Why, of course! If I were chasing a moose you don’t think I would let a little thing like a border get in the way!”

And when he was politely asked to relinquish the gold-headed cane he had just been presented so it could be returned for the safekeeping of the Lebanon Historical Society, it had to be teasingly wrestled from his hands. A man for all seasons doesn’t lose his grip just because he’s turned 102.