A Tale of Two Sisters… In Two Cities 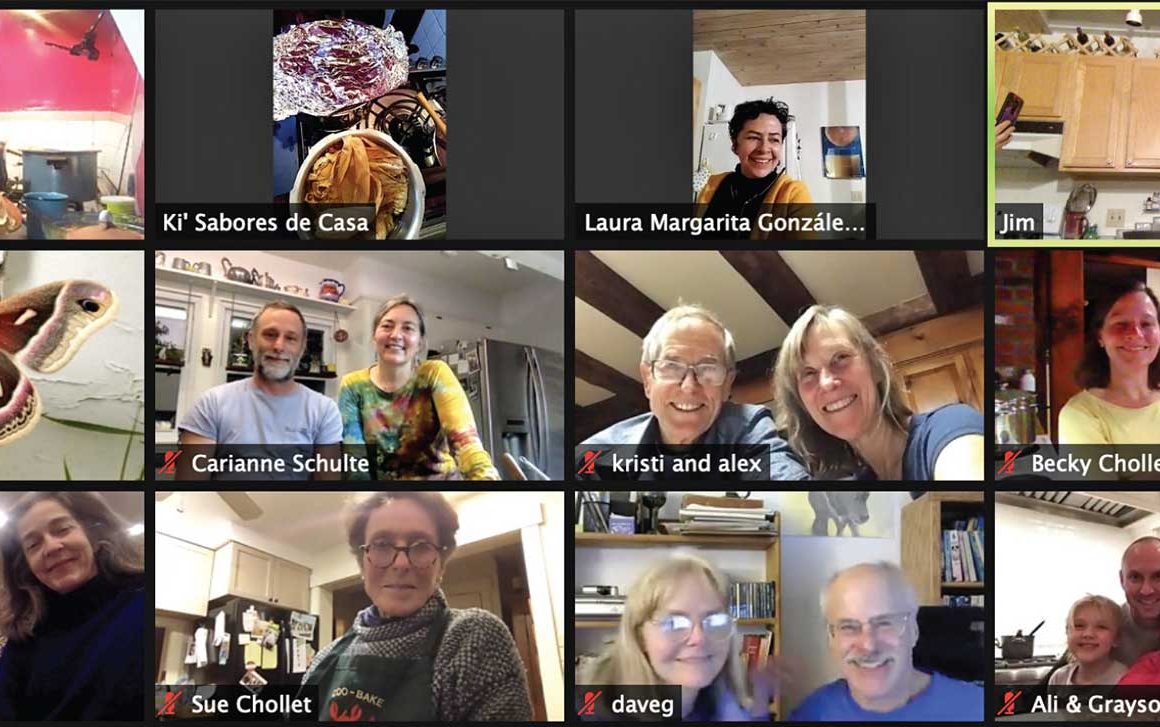 For sisters Laura and Cecilia Gonzalez, food is love, and family is everything. Even though they are separated by thousands of miles – Laura lives in Lebanon with her husband Jim, and Cecilia is in Mexico City – they have found a unique way to stay connected. Their new joint venture is a virtual cooking school that’s all about sharing the rich and flavorful culinary heritage of Mexican cooking and its central role in their family.

Laura is the second sibling and has worked as a Spanish teacher in the Rassias Center at Dartmouth. Growing up in the city of Leon in the Mexican state of Guanajuato, family gatherings revolved around sharing food. “We gathered for every birthday, every wedding, for everything. We all like to eat – my son Mario says that you are not a Gonzalez if you don’t buy something to eat while the food is cooking,” says Laura. “And everyone can participate; everyone brings something to prepare and the menu is never limited.” Sundays in Mexico are family gathering days, a practice central to Mexican culture. Food is at the heart of any meeting or family event, and if someone visits you at your home, food is a vital part of that experience. There’s an expression in Mexico – ‘Where one eats, two eat,’ which means that there’s always enough food for everyone; if there’s food for one there’s food for all.

Laura’s journey to the Upper Valley began when she was an English teacher in Mexico City and decided to train with the Inter-American Partnership for Education to learn to teach English with the Rassias Method® to Mexican public school students. Laura met her husband, Jim, through the program, who was based in Lebanon and traveling frequently to Mexico. Laura was able to emigrate to Lebanon two years ago after receiving her green card to become a permanent resident of the US.

Laura became a member of the Buena Gente Social Club in Hanover, a Spanish-speaking group founded in 2009. This led to teaching Mexican cooking classes to club members via Zoom at the beginning of the pandemic. The collaboration to offer virtual cooking experiences with Cecilia and her new catering business, Ki’ Sabores de Casa (which means Delicious Flavors of Home) was born when the sisters decided to share their Mexican culture and traditions with a wider audience. Jim has an important role in the classes as a translator and sharing local knowledge. He also helps Laura and Cecilia understand what American tastes can tolerate. Laura muses, “We want to make things very Mexican.”

The sisters are very happy to be working together on the project. “We saw each other at family gatherings, but now we see each other more frequently and in a different context. We have managed very well because Cecilia is the expert cook in our family, and I look for the ingredients locally and promote the classes.” Laura also shares the history and culture of the various dishes – like the fact that there are more than 500 tamale recipes in Mexico, prepared 4,000 different ways, and the Mexicas (a Nahuatl-speaking indigenous people and rulers of the Aztec Empire) used to prepare tamales as a community and filled them with the meat of turkeys, flamingos, frogs, rabbits, and fish. Laura notes, “When I lived in Mexico, I didn’t think about where the ingredients came from, and now, with the classes, it’s a necessity.”

In Mexico, each state has different culinary specialties and the markets feature regional foods, spices, and cooking traditions. Finding authentic Mexican ingredients in the Upper Valley can be a bit challenging, but Laura and Cecilia are becoming adept at making substitutions.

Cecilia, the youngest sister in the family and founder of Ki’ Sabores de Casa, was born in Mexico City and grew up absorbing the family food traditions. Cecilia remembers, “We all used to go together to the supermarket and everyone carried bags home. We had to buy something to eat while we were cooking because it takes so long that you have to eat something. Mexican food takes time.” But it took a while for Cecilia to fully embrace the family tradition of home cooking. “I have to admit that, as a girl, I didn’t like cooking, but I started to like it when I saw my mother, brothers, and sisters cooking. I gravitated to the sounds, smells, and sights of the food.”  After working in retail for many years, last year she left her job and followed her dream, starting with catering and delivering food to people’s homes. “The idea I want to translate is that of home cooking – food that you cherish – food that your mothers or grandmothers made.”

The notion of cherishing food as well as its preparation was introduced to Laura’s husband, Jim, an American, when he began joining Gonzalez family gatherings. “By the time I joined the family, the tradition was to go either to Cecilia’s home or sometimes their mother’s. Cecilia is the family cook, which I think comes out when she is teaching the classes. She is often saying, ‘What does it smell like, can you hear the sound, you can tell when it’s ready by how it feels, or when you see the color of the tomatoes change.’ She really experiences cooking with all of her senses.” Jim quickly became an eager participant in preparing meals with the family, including the practice of eating along with cooking. “By the time the meal was ready, I was already full.”

Both sisters and Jim agree the virtual classes have been successful. In a recent session on making tamales, part of the class involved 15 minutes of mixing the masa (dough made with corn flour) by hand, an important traditional Mexican technique. Laura shared the wisdom behind this practice, “When you use your hands to prepare something, you transmit to the food your feelings. That is why Cecilia was saying during class, ‘Smile and be happy – the energy is going to the food that you are making with your hands.’ You get into a state of happiness and concentration to get it well made and it’s a challenge and a pleasure.”

So how have the classes been received in the Upper Valley? Participant Jill Fisher says that “…seeing Cecilia in her kitchen in Mexico with its gorgeous bright pink wall and demonstrating the cooking process in Spanish is like being transported through the screen. Jim and Laura also set a warm, friendly tone that creates a delightful experience even apart from the learning to cook Mexican dishes.”

Alex Medlicott appreciated discovering new ways to understand Mexican food from Chef Cecilia. “The more subtle flavors found in sauces made from roasted peppers, peanuts, and sesame seeds replaced our misconception of Mexican food, probably perpetrated by the US fast food industry, that it’s all about salt, cheese and picante.”

Cecilia notices that the classes seem to be evolving as a catalyst for family gatherings. “One of the things I like about these classes is that you can see the whole family cooking together which is something we do in Mexico. From people initially taking the class by themselves, now entire families are joining the class from around the country. What started as an extension of learning Spanish has now expanded to not having to speak Spanish, but gathering families together to enjoy learning how to cook.”

The classes have also served to broaden awareness of Mexican culture. Laura notes that people are seeing a different perspective of what Mexico is like. “Seeing Cecilia in her home may give people an idea of the richness of Mexican food, and the Mexican people. It’s not that we are teaching anything specific. Most of what we learn is about the experiences that we have in life and specific relationships between Mexican food and culture.”

Jim agrees. “The sisters have talked a lot to me about the ‘slow food movement’ and trying to transmit part of that culturally. You can break down stereotypes when you get to know people from different cultures; I used to think that the experience had to be with people in the same place, but you can have experiences that create the same kinds of bonds virtually.”

Future Ki’ Sabores de Casa experiences may include guiding beginners through the process of choosing ingredients – what things should feel and smell like, to coaching students through the cooking experience. After the pandemic, Cecilia may journey to Lebanon to offer an in-person class. Another option to enrich the experience is to show the sights and sounds of a food market in Mexico City, including the street vendors selling tamales by bicycle, calling out “Tamales!” as they ride the streets.

For now, the Gonzalez family is continuing to gather on Sundays via ZOOM, with many of the family’s seven siblings participating at once from their respective homes. Laura is grateful for this renewed family time, and as Cecilia likes to say, “Cooking is love. If you cook with the feeling then that’s what you are going to give people through the food and sharing time together.”